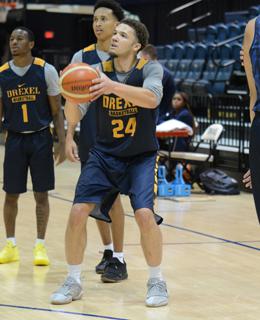 The Drexel Dragons are going Down Under.

Zach Spiker’s group is leaving on Friday for a nearly two-week trip to Australia, where they’ll play four games against professional-level competition as well as do some sightseeing and team bonding along the way. These foreign trips, which Division I programs are allowed to take at most once every four years, comes at a crucial time for a Dragons program that’s trying to build its way back into the upper tier of the CAA after several years at or near the bottom.

Here are some observations from practice on Wednesday afternoon:

1. Plenty of new faces to learn

A few of the Dragons’ major pieces from a year ago are back, including senior guard Troy Harper, junior point guard Kurk Lee Jr. and junior forward Alihan Demir, who all are all but assured of starting roles and 30-plus minutes per game this season. But there’s been plenty of turnover as well, with four rotation members graduating from last year’s 13-20 squad, as well as the transfer of leading scorer Tramaine Isabell to Saint Louis for his senior year. And stepping in to fill a void of over 110 minutes per game will be a group of seven players who didn’t take the floor in a Drexel uniform a year ago.

Two of those seven, redshirt sophomore James Butler and redshirt freshman Timmy Perry Jr., were both on the roster a year ago, taking their redshirt seasons. Butler, a 6-8 forward and transfer from Navy, didn’t do anything exceptional in 5-on-0 drills, but he’s a physical body who can play the ‘4’ or ‘5’ and has the ability to stretch the floor with his shooting; Perry, a 6-10 center from Cherry Hill East and the Phelps School for his prep year, was dealing with an injury and did not participate in practice.

Of the five new faces on the team, three are true freshmen: point guard Camren Wynter (DME Academy, Fla.), shooting guard Coletrane Washington (Quaker Valley, Pa.) and point guard Matey Juric (Oakwood Collegiate, Ont.). Washington, a lanky 6-4 off guard, is a strong outside shooter, and was connecting well above 50 percent from deep in shooting drills. Wynter, a 6-2 guard known more as a slasher, also had his outside shot falling at a high rate, while Juric, a 6-1 point guard, is perhaps the strongest athlete of the trio. All had their moments on Wednesday, but there’s clearly much learning to be done before they’re ready to play major minutes in the CAA. Then there’s Cal Poly grad transfer Trevor Johns, an undersized (6-1) off guard but perhaps the purest shooter on the team, and 6-6 Zach Walton out of Edmonds (Wash.) CC, a versatile wing who brings a mature body and game to the court.

The Dragons have certainly become a more 3-point-happy team under Spiker, taking around 35.5 percent of their shots from beyond the arc in the last two years after tending to stay at or below 30 percent under the tenure of Bruiser Flint, according to KenPom.com. But they haven’t been any better at shooting the rock; last year, they hit 32.5 percent from deep, good enough only for 304th in Division I hoops. The team’s best 3-point shooter by percentage (min. 40 attempts) was Demir, who hit 36.5 percent (23-of-63), but its highest-volume shooters were senior Sammy Mojica (32.0 percent), Lee (34.2 percent) and Tramaine Isabell (34.0 percent), none of whom were exactly lighting the nets on fire with enough consistency.

But looking around the Daskalakis Athletic Center on Wednesday, Drexel looked like a much-improved team from 3-point land. Lee and Harper will always be known more for their ability to get to the rim than to hit from outside, but the rest of the team around them was hitting with regularity from deep, albeit mostly in shooting drills and 5-on-0 action. Almost everybody on the team looked at least competent from outside, and several especially stood out; Washington, who’s made as many as 10 3-pointers in a high school game, and Walton were both knocking down shots left and right, as was Walton. Jarvis Doles, a 6-8 stretch-4 who got his feet wet last year, looked much more confident on the floor, and though he’s got an unorthodox release he hit 14-of-39 (35.9 percent) from deep last year. Though they’re using a slightly different FIBA ball, keep an eye on the shooting numbers in Australia to see if they trend upwards from the low-30s.

3. Frontcourt situation one to watch

For each of Spiker’s first two seasons, he’s been able to rely upon one senior forward down low -- Rodney Williams two years ago and the unrelated Austin Williams last season. Both post-up options were strong two-way players, protecting the rim and scoring inside, though Rodney (6-7) was the better offensive player and Austin (6-9) the stronger rebounder and interior presence. But this year boasts no such experienced center; of the five players on the roster 6-8 and taller, there’s one junior (Demir), three sophomores (Butler, Karaninas and Doles) and one freshman (Perry). And it’s an interesting mix, without a true “power” post player in the style of Austin Williams, though it’s a group that does have a high upside down the road.

Surely the leader of the group this year will be Demir, who was one of the bigger surprises of the city last year, as the JUCO transfer averaged 10.7 ppg and 5.4 rpg, scoring from all three levels and showing off good play-making ability as well (1.9 apg). I would have liked to see Perry out on the court, as the former Cherry Hill East big man made significant strides during his year at Phelps and had an entire year in college to continue to progress, but he was sidelined with an undisclosed injury. Butler is the most physical of the group, though a little undersized to play the ‘5’ at 6-8, but he’ll surely get his chance to earn a rotation spot. Kararinas wasn’t with Drexel most of the summer, playing with the Lithuanian U-20 squad while his teammates were in summer school, but the lanky 6-10 European has a knockdown ability, though he’s still adjusting to his body and didn’t yet look like he was moving as well as his teammates. Look for the sophomores to get a lot of minutes in Australia (and Perry, if he’s able to go) as Spiker tries to see what he’s got out of the underclassmen.