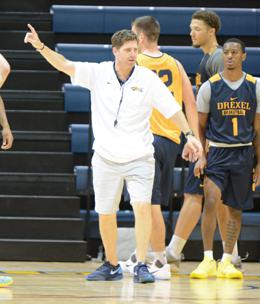 Zach Spiker (above) is entering his third year as head coach at Drexel. (Photo: Josh Verlin/CoBL)

Though the college basketball season doesn’t start for another three months, Drexel is already getting busy on the court.

The Dragons fly out on Friday for a 12-day trip to Australia, which will consist of four games against professional-caliber competition through stops in Melbourne, Cairns, and Sydney.

This will be the first international trip for Drexel under third-year head coach Zach Spiker – the NCAA only permits teams to take foreign tours every four years, and Spiker didn’t get the opportunity during a seven-year stint at Army – and it’s something the Dragons are quite looking forward to.

“I can’t wait,” Spiker said before an open practice on Wednesday afternoon. “I just want to experience everything, I want to eat the crazy food, I want to see the alligators, the wallabies, I want to do all those things that you should get to do. It’s a once-in-a-lifetime experience.”

Drexel will get to do all those things, with visits to the Great Barrier Reef, Sydney Opera House, and an Australian-rules football game on schedule, among other tourist attractions.

“It’s exciting,” senior guard Troy Harper said. “Just to get away with the guys, get some team bonding activities and play a couple games out there, have some fun, get to know the freshmen before the season starts and stuff like that.”

Off the court, the players will be doing plenty of bonding, but it will be just as positive a team-building experience on the court.

Drexel’s opponents will include the Sydney Kings, a professional side featuring the likes of NBA veteran Andrew Bogut and 2017 McDonald’s All-American Brian Bowen. The level of play will, without a doubt, be fierce.

“We have 48 minutes of a 24-second shot clock, a ton of possessions up and down, playing with new guys, young guys, and even older guys in new roles, so I don’t think that can be undervalued at all,” Spiker said. “It’s going to be a terrific sample size for us.”

Drexel, which went 13-20 last season, has lots to sample at this point in the offseason. With all the new pieces coming into place, the rotation for the upcoming season is fairly unknown, and this trip will really be the first opportunity for Spiker and his staff to see any of the recently arrived players face live-ball competition, as opposed to the Dragons’ scout team.

Along with the newcomers, it will also be the chance to see where sophomores Jarvis Doles, Sam Green, and Tadas Kararinas stand, with Harper (10.1 ppg), junior point guard Kurk Lee (12.4 ppg, 3.2 apg), and junior forward Alihan Demir (10.7 ppg, 5.4 rpg) the only players with carved-out roles at this point.

“I think our goal is how many different situations can we put our guys in and see and learn from them,” Spiker said. “The more shared experience that we have on and off the floor in this trip, the better we’ll be and the more connected as a team we’ll be for when the games and records and the wins and losses really count.”

In order to maximize their trip, Drexel has been preparing not just for the competition, but also the long journey just to get to Australia. The Dragons met with a pair of Australian natives, including DU women’s soccer player Emma Heckenberg, to make sure they can handle the two days of flight without being overly jet-lagged afterward.

Spiker has also been consulting with his brother Tim, who travels frequently to Australia on business and will be there to watch Drexel play in Sydney.

With their phones and tablets loaded up with movies, bags packed up for the two weeks of time away from campus, and bodies primed for the first competition of the preseason, the Dragons are geared up for two exciting weeks of growth and adventure. The more they can get out of this trip, the better.

“I want it to be great on every level: team building, X’s and O’s, chemistry, camaraderie off the floor,” Spiker said. “Most teams, if you look back and study research, they usually capitalize on a foreign trip within a 24-to-36-month window.

“We knew this year was coming, this rotation was coming, we’ve kind of built for it, and certainly everything doesn’t go exactly to plan along the way -- but we’re excited for our young guys to get the opportunity.”