One of CoBL’s co-founders, Josh has been running the organization since its inception. A graduate of Temple University with a degree in broadcast journalism, he made CoBL his full-time job after leaving Temple’s Beasley School of Law in early 2013, developing it into the area’s go-to source for high school and college basketball news and information. Since then, he’s covered thousands of games and events while mentoring well over 100 high school and college students who have contributed to CoBL over the years. He currently lives in East Falls with his wife, Aurora, and their two cats, and is studying for his Master's degree in communications at Syracuse University. 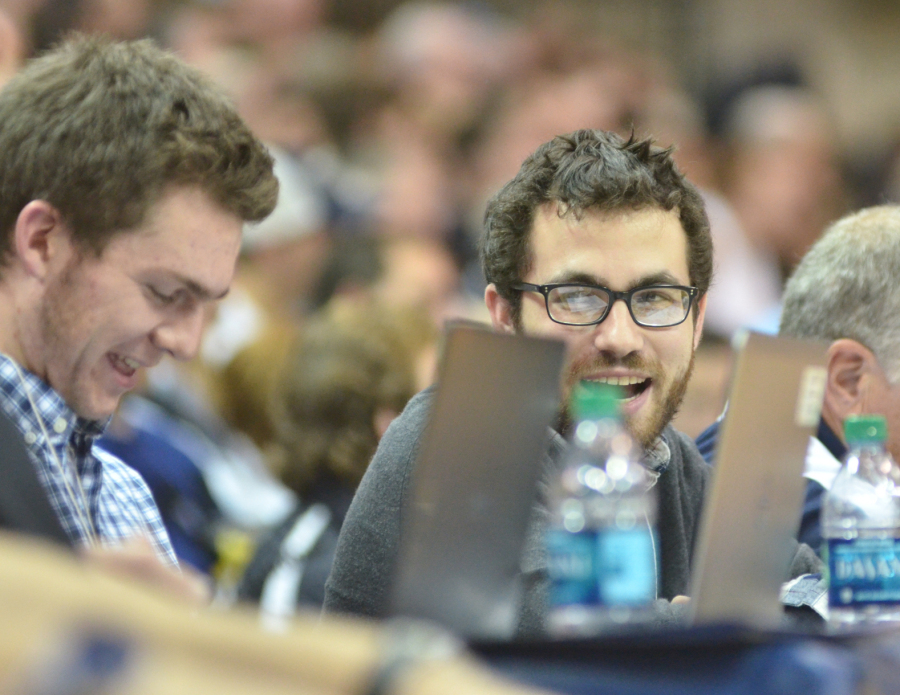 A graduate of West Philadelphia High School, Harrison played for the Speedboys and then at Alvernia College before transferring to Newbury College (Mass.), where he finished out his on-court eligibility, receiving his Bachelors in Behavioral Health. A longtime assistant coach under Paul Romanczuk at Archbishop Carroll (2005-14), Harrison also coached with Team Final (2013-16) and was the head coach at Girard College High School for one season (2018-19). He was also an assistant coach at Cheltenham High School, for whom his son Zahree Harrison — now a sophomore at St. Francis (Pa.) — played until his 2020 graduation. Before coming to CoBL, he was was the director of K-Low Elite’s middle school programs, while also running youth camps for Philly Youth Basketball, for whom he also coordinated their ‘I Am Because We Are’ outreach program.

Kate Harman wrote for The Philadelphia Inquirer from 2010-2017, working as the beat writer for boys’ and girls’ soccer, girls’ basketball, and softball for the Southeastern Pa. area. There, over 150 different schools and 11 leagues were in her coverage area. After leaving the Inquirer she continued her passion for local basketball when she started Beyond the Arc through suburbanonesports.com, an endeavor that lasted two seasons. Harman has taught at Rowan University in Glassboro, NJ, since 2013, where she has been a member of the Communication Studies department. She also teaches courses in the Sports Communication and Media program, a major she helped launch in 2018.

Christy first got into sports writing in 2015, covering St. Joe's baseball and softball teams for the student newspaper and went on to serve as sports editor. Since then, she has photographed various events and games for St. Joe's, and wrote feature stories on the men's basketball team for multiple seasons. She also briefly wrote a high school swimming notebook for the Courier-Post. Originally from Kennett Square, Christy graduated from St. Joe's with a bachelor's in English and communications studies in 2016, and a master's in writing studies in 2017. She lives in Lower Merion and also works as a marketing communications specialist at Penn State Great Valley.

Kevin Callahan covered college and Big 5 basketball for the Courier-Post Newspaper from 1983-2016 before going freelance writing, including for Sixers.com, joining CoBL during the 2019-20 season. He played point guard for the Ursinus College 1981 Final Four team and 1982 Final Eight team after playing in the South Jersey all-star game as a senior at Camden Catholic High School. A long-time CYO coach, including coaching St. Joe Prep’s all-time leading scorer Steve Vasturia at St. Mary of the Lakes, ‘Cal’ was inducted in 2015 into the South Jersey Basketball Club Hall of Fame

Kevin Cooney has worked as an award-winning sports journalist in the Philadelphia region since 1994, covering high school, college and professional athletics. Kevin won three Keystone Press Awards and two Associated Press Sports Editors awards for his work at the Bucks County Courier Times and Doylestown Intelligencer from 1996 to 2017. He covered the Big 5, Villanova’s run to the 2016 NCAA Championship, the Phillies run to the World Series in 2008-09, the Eagles in the Andy Reid/Chip Kelly era and the Allen Iverson-era 76ers. A Father Judge and Drexel graduate, Kevin resides in Northeast Philadelphia with his wife Bessie, stepson Joseph, stepdaughter Katie and his two dogs Finley and Fergus.

Born and raised in Philadelphia, Rich is a graduate of Temple University with a Bachelor’s Degree in Journalism. He joined CoBL in 2015 and has written a variety of stories ranging from the Philadelphia Catholic League title game to Top-25 college basketball matchups. Over the course of his career, Rich has had his work published in the Philadelphia Inquirer, the Delaware County Daily Times and ZAGSBLOG.

Jason Guarente has written for the Reading Eagle and Lancaster New Era for the past 20 years. He was fortunate to cover Lancaster Catholic's 35-0 team in 2003 and both of Reading High's state championship teams. He has written about Berks County's girls for the last three seasons and has worked as a beat writer for every sport imaginable since getting his start at the Daily Local News in 1996. The Lancaster resident has won Keystone Press and AP Media Editor awards and prides himself on writing about the people more than the games.

Mitchell Northam grew up on the Eastern Shore of Maryland, but lives in Durham, North Carolina now. He’s a voter in the AP Top 25 women’s basketball poll and a member of USBWA. His work has been featured at the Atlanta Journal-Constitution, the Orlando Sentinel, NCAA .com, The Next, Pittsburgh Sports Now, SB Nation, Sports Illustrated and WUNC. He’s a graduate of Salisbury University.

Andrew Robinson has spent more than a decade covering sports - primarily soccer and basketball but a little bit of everything else too - at various levels, starting in college with Penn State's award-winning student newspaper The Daily Collegian while graduating with a degree in journalism. He then spent two years with The Gettysburg Times, spending much of his free time putting his history minor to good use. Most recently, he worked for Montgomery Media, the Lansdale Reporter and the Norristown Times Herald as a sports writer under the PA Prep Live banner from 2014-2021.

Joseph Santoliquito is an award-winning sportswriter who has been covering high school football and basketball since 1992. He's covered Kobe Bryant, Jameer Nelson, Tyreke Evans and Rondae Hollis-Jefferson. He's broken national stories on local pro athletes like Carson Wentz and began writing for CoBL in July 2021. He is the president of the Boxing Writers Association of America and can be followed on Twitter @JSantoliquito.

Ryan Coyle grew up in Willow Grove (Pa.), where he attended Upper Moreland and was a four-year starter in the basketball program, finishing in the top five in program history in assists. He is entering his senior year at Misericordia University in Wilkes-Barre (Pa.), where he's also a four-year member of the basketball team, and is majoring in Sport Communication. He grew up going to games in the Big 5 with his dad and looks forward to covering the Philadelphia basketball scene as part of the CoBL team.

Ty Daubert is a sports journalist who joined the CoBL staff in August 2021. Also working as a minor-league baseball reporter, he’s covered a number of prospects who went on to play in the major leagues for the Phillies and other clubs. Ty has covered high school and youth sports in Schuylkill County in the past as well. A native of Pottsville, he is a senior at Cabrini University and currently resides in Manayunk.

Missy Light Dougherty is a lifelong Philly sports fan and ovarian cancer survivor who currently works in athletic administration at Delaware County Community College. Upon graduating from Elizabethtown, Missy spent several years teaching and coaching high school basketball. After earning a master’s degree in sport management from Neumann University, she worked in athletic communications at Haverford College. A Havertown resident, who can often be found in Sea Isle, Missy is thankful for the excellent English teachers she had at Merion Mercy Academy, who instilled a love of writing, as well as for the opportunity to be a contributor to CoBL!

Jeff Griffith has been writing and creating content since he was a junior in high school in Downingtown, PA, back in 2014. Jeff got his start with CoBL — and has remained involved with is coverage for the better part of the years since — before furthering his education at Arizona State University, where he covered ASU’s football, men’s basketball and baseball programs, and also developed a reputation for accurate NCAA Tournament “bracketology” projections. Now based out of Indianapolis, Jeff works full-time in marketing while managing several contract and freelance roles on the side, both in sports and in performing arts and entertainment.

Bridget is a senior at Villanova University pursuing a major in Communication with concentrations in Journalism and Media Production, with a minor in Political Science. She grew up in Westfield, N.J., with a huge interest in sports, which she now likes to write about. She is especially interested in basketball and started contributing to CoBL in 2021. Bridget hopes to pursue a career in sports journalism combining her writing experience and interests in filming and editing.

A lifelong citizen of Philadelphia, Sam is a graduate of Germantown Friends School and Haverford College, playing varsity basketball for both schools. Now a graduate student at the University of Pennsylvania, Sam has a passion for writing and basketball as well as a deep knowledge of and love for Philly-area basketball. He is thrilled to be able to apply those passions and interests in contributing to CoBL.

Sean McBryan is a multimedia sports journalist with experience at both traditional and modern media organizations. He started his sports writing career at the Reading Eagle newspaper and many blogs. Sean is a graduate of Penn State and Syracuse and a Pennsylvania native. He loves telling the stories of others and is a noted sports and coffee geek.

Joey Piatt is a Lancaster, Pa., native and is currently a student at the University of Pennsylvania. He started sports writing in 019, when he joined Penn's student newspaper, and hasn't looked back. He plans to pursue a career in sports media following his graduation. In addition to his college hoops coverage with CoBL, Joey's work can be found in The Philadelphia Inquirer and The Daily Pennsylvanian.

Matthew Ryan lives in Bethesda, Maryland. He is currently a student at Villanova University (class of 2024) and plans on majoring in Communication with a specialization in Journalism. After college, he plans on continuing my career in sports media. He has worked in the sports media field for about a year and loves it! In his free time, he loves hanging out with his family, dog, and friends, as well as watching sports and relaxing.

Jerome began writing in 2017 while attending Penn State University. Originally, he wrote about music and other arts and entertainment subjects, but eventually began writing about sports, too. While in State College, he covered a variety of sports, including basketball, volleyball and lacrosse for the student-run radio station. Jerome began writing for CoBL in 2020 after spending years reading the site. After graduating from Penn State in 2019, he wrote for the Premier Lacrosse League in 2020, covering their Championship Series. In addition to writing for CoBL, Jerome also works in marketing for a financial service company.

Zak currently lives in Blue Bell and is a senior at Wisaahickon High School. He's been a huge sports fan his entire life and his freshman year, he became a huge high school basketball fan. He went to many games in the area and eventually started to cover some games for CoBL in 2021. He has a passion for basketball and loves to write about it. In college, he'll major in communications and pursue a career in sports journalism/media.

Kayla is a senior student-athlete at Moravian College. She plays on the women’s basketball team and is studying business and sports management with a minor in communications. Kayla has a passion for basketball and creative writing. Her career goals include working for a Division I athletic department or a professional sports league after earning her MBA from Moravian.