Sean Yoder becomes next Pennridge player to commit to Navy 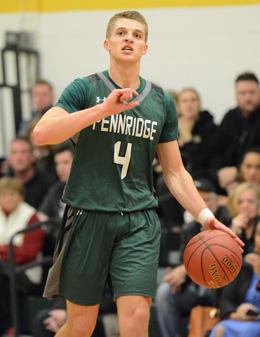 From an early age, Sean Yoder has continually been tested.

He has always wanted to challenge himself and those around him have pushed him to surpass each, new challenge along the way. Whether it was from a mental standpoint in the classroom or a physical one on the basketball court, the Pennridge senior has looked for new ways to better himself.

As an eighth grader, he was elevated to the Rams freshman team by head coach Dean Behrens. While it was a permissable move, it was an uncharacteristic one for the Pennridge program. In his freshman year, he played on the junior varsity team before becoming a full-time varsity starter in his sophomore season. Yoder has been presented with one challenge after another and outperformed expectations each time. Over the weekend, he announced his next challenge.

Yoder committed to Navy on Saturday, almost exactly one month after taking an official visit to the Annapolis, Md. campus on Sep. 14. The 6-foot-2, 180-pound senior point guard noted this challenge was about far more than basketball.

“When choosing a school, you have to look at the future somewhat,” Yoder said. “It’s tough as a teenager to do that but toward the end of the process that’s what I was focused on as far as where my career was going. If you go to the Naval Academy, you have a future so I could definitely see myself serving our country and being in the navy.”

Yoder chose to commit to head coach Ed DeChellis and the Midshipmen after seeing how much progress the program has made in recent years playing in a conference like the Patriot League.

“They’ve had a good team the past couple of years and they’re looking to get better each year in order to make the tournament coming out of the Patriot League,” Yoder said. “You have Bucknell, Colgate and a few other schools that are on top but Navy is knocking on the door and they’re trying to get into the tournament.”

The three-year starter also had offers from Campbell, Furman, Vermont, Canisius, Wagner, Colgate, High Point and Holy Cross. The commitment was the culmination of continued success at the high school level for Yoder. He was the only sophomore on the 2016-17 Suburban One League-Continental Conference First Team. He was named an All-SOL selection once again last season after avg. 15.8 ppg and leading the Rams to a PIAA Class 6A Tournament berth, where they fell to eventual champion Roman Catholic in the opening round.

Behrens has been on the sideline to witness Yoder’s maturation firsthand and wanted to get his young point guard valuable experience early on.

“When I saw him in seventh grade, I thought he was going to be a special player to be quite honest,” Behrens said. I thought, ‘Wow, this kid is going to be special.’ A lot of people were not happy about [an eighth grader playing on the freshman team] but I was able to get enough people on board to make that happen. This way, it gave him an extra year to play at a higher level.”

Behrens coached Sean’s older brother, Kyle and he also coached another Naval Academy midshipman in Tim Abruzzo. Abruzzo played for Behrens from 2010-12 where he graduated as the school’s all-time leading scorer (1,118 points) at the time of his departure and still holds the Rams’ school record for three-point field goals made (193). While at Navy, he played in 67 games including five starts and avg. 5.4 ppg in three seasons.

Abruzzo continued to remain close to the Pennridge program during his time at the Naval Academy and even after graduation, giving Yoder the opportunity to connect with him and learn about the Midshipmen program.

“We had a couple of phone calls and texted back and forth to see what his experience was,” Yoder said. “He definitely guided and helped me with figuring out what the Naval Academy is all about. It was good because he’s been through it and he can show me the ropes down the road.”

Having had one player who had previously gone through this process, Behrens knows the challenge that comes with attending Navy but felt Yoder would get that next challenge he was searching for.

“I’m not surprised Sean picked the Naval Academy,” Behrens said. “Vermont was a tremendous opportunity and so was Colgate. I think he is willing to test himself at this next level, not only basketball-wise but also educationally and see what happens from there. He knows the commitment and it’s a big commitment.”

Yoder is heading to a Navy team that has had some success recently. Under DeChellis, the Midshipmen have won at least 16 games in each of the last three seasons including a 20-12 (11-7 Patriot League) record last season that featured wins over Pittsburgh and Columbia. They will have to replace their top three leading scorers in All-Patriot League First Team selection Shawn Anderson (13.3 ppg), two-time Patriot League All-Defensive Team pick Bryce Dulin (10.1) and Hasan Abdullah (9.9), who led the team with 49 made three-pointers last season. All three players were guards, which means there could be opportunities for Yoder to play immediately on a young, inexperienced roster when he arrives on campus next year.

Presenting Yoder with new challenges has been something Behrens has relished as a coach and the Naval Academy should only to continue to do that.

With his college decision out of the way, Yoder can focus solely on basketball and helping his team get ready for the upcoming season, which he’s hoping ends with a trip to the state playoffs.

“I think now that I have my decision out of the way, it’s a matter of putting that to the side, focusing on the season and getting to that next step where we want to be, which is making a run at the state tournament,” Yoder said. “We know, in order to get there, we have to put the work in open gyms, practice and weight room before the season starts so we can hopefully get there.”