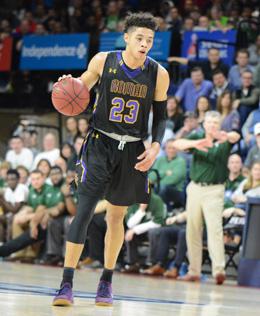 When Seth Lundy went up on his official visit to Penn State during the last weekend of September, he was hiding quite the secret from the Nittany Lions’ players who were hosting him. They thought they were trying to convince the Roman Catholic senior that he needed to join their team over the likes of Louisville, Marquette and Virginia Tech, the other three schools in a final quartet he’d announced weeks earlier.

“The whole time I was on a visit, the whole team had no idea I was going to commit there,” Lundy said.

Fact was, he’d already committed -- the week prior to his visit, on Sep. 20, when he called up eighth-year head coach Pat Chambers and became the fourth member of the Nittany Lions’ 2019 class. But for the next week, the only people who knew were Lundy and his family, the Penn State coaching staff and Roman head coach Matt Griffin.

So he went up to State College for his first and only official visit last Friday -- his fourth time on campus overall -- with his plans already settled, no more sales pitch needed.

Lundy finally let the cat out of the bag on the first night there, telling Roman alums Lamar Stevens and Shep Garner while at Chambers’ house for dinner. The rest of the team found out the following morning at practice -- assuming Stevens and Garner hadn’t quietly spread the word beforehand.

Either way, Lundy got the reaction he was hoping for.

“I don’t know if the team was acting surprised,” he laughed, “but I felt like they were really surprised.

“It was just, it was definitely a great moment. I felt very welcomed and wanted there, and I felt like I really made a good decision.”

The No. 111 player in the Class of 2019 according to the 247Sports’ composite rankings, Lundy is a consensus four-star recruit, a 6-foot-6, 195-pound wing who can defend multiple positions and score from all three levels.

“I felt like I wanted to go where was the best fit for me and the plan that Coach Chambers had for me was definitely the best one for me,” Lundy said. “I feel like he wants the best for me academically and athletically and to get me to the next level after college.”

Lundy is the second Roman Catholic senior to commit to a Division I school in the last two weeks, joining recent St. Joe's pledge Hakim Hart. He's also the second member of his family to go Division I for hoops, joining his older brother Xavier Lundy, who scored 883 points at Rider from 2013-17.

As a junior at Roman, Lundy averaged a team-high 15.9 ppg for the Philadelphia Catholic League and PIAA Class 6A state champions, helping the Cahillites capture their third title in four years in both arenas.

Those prior trophies were brought home with the help of two other future Nittany Lions, Tony Carr and Lamar Stevens, the latter of whom was only at Roman for his senior year after previously attending the Haverford School.

Though Lundy and Stevens stand around the same height, they have rather different games. Stevens is really more of an undersized power forward, who uses his superior athleticism and terrific effort around the glass to be productive, averaging 14.2 ppg and 5.8 rpg in his first two years at PSU but only hitting 32.5 percent of his 3-pointers. Lundy is more of a polished outside threat, though he’s certainly capable of posting up in mismatch situations and scoring in the mid-range.

Stevens will be a junior this year, and a senior when Lundy arrives on campus; Carr left after two seasons, getting picked in the second round of the NBA Draft before ultimately signing with a team in the top league in Italy. Garner just finished up a four-year career in Happy Valley where he scored 1,629 points and set the program’s all-time record in 3-pointers made (37.9).

Though Lundy said that the Roman Catholic connection didn’t really have a bearing on his decision, “(Chambers) talked about the plan that he had for Tony Carr and for Lamar Stevens, and Shep Garner, and I felt like what he did with those three players was great.

“(Garner) broke the all-time 3-point record at Penn State...the way (Chambers) plays Lamar Stevens, he lets Lamar be very versatile, he guards between the 1 and the 4 and offensively he plays on the perimeter, he has a mid-range game and he posts up. And with Tony Carr they let him facilitate and really run the show. I feel like I can do all three of those, to be honest.”

Even when Stevens is gone, Lundy will have several other Philly-area connections on the Nittany Lions’ roster in sophomore guard Izaiah Brockington (Archbishop Ryan), sitting out a transfer season this year after playing at St. Bonaventure as a freshman, and Kyle McCloskey (Germantown Academy), who started at Villanova as a football player but made the leap to the Big Ten for hoops midway through last year.

They’ll all be ready to be part of the rotation in 2019-20, trying to help a program that just had its best season in nearly a decade, going 26-13 (9-9 Big Ten) and winning the NIT Tournament after just narrowly missing out on an NCAA at-large bid.