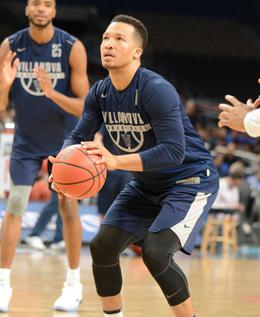 Jalen Brunson (above) and VIllanova were once again the class of the City 6 -- and the rest of Division I basketball. (Photo: Josh Verlin/CoBL)

Six Quick Look-Backs
Miss out on the excitement of last season? Here’s a quick guide to get you right back in the mix.

Drexel Dragons
The second year of the Zach Spiker era was a slight improvement over the first, with a bump in overall wins (from nine to 13) and victories in Colonial Athletic Association play (from three to six). There were certainly some games early on where Drexel looked like it might be a problem in the Colonial Athletic Association, beating Houston on a neutral court and La Salle on the road, while hanging tough with Temple in a three-point road loss in December; there were also games, like a season-opening 78-69 loss to Bowling Green where the Dragons let a 10-point, second-half lead slip away, where it was clear there was plenty of work left to be done.

Playing five of its first eight CAA games on the road proved to be a bad formula for the Dragons, which opened 1-7 in league play, digging themselves a hole that proved far too deep to dig out of. There was still a bit of excitement to be had in the form of a four-game winning streak, as well as the largest comeback victory in Division I history, a 34-point deficit overcome over the final 25 minutes of action, including a furious rally in the game’s closing five minutes for an 85-83 victory over rival Delaware on Feb. 22.

Five Dragons finished the season in double figures, led by redshirt junior guard Tramaine Isabell, the Mizzou transfer who averaged 21.0 ppg, 7.5 rpg and 3.4 apg in his only season in a Dragons uniform before transferring to Saint Louis in the offseason. Redshirt junior and Campbell transfer Troy Harper averaged 10.1 ppg in his first season at DU, while sophomore Kurk Lee Jr. (12.4 ppg, 3.2 apg) and senior Sammy Mojica (11.1 ppg, 4.0 rpg) both suffered slight drops in their production from the year before. Making a strong debut season as well was sophomore forward Alihan Demir, who played at Central Wyoming (Junior) College the year prior but averaged 10.7 ppg and 5.4 rpg in his first Division I season.

La Salle Explorers
Hopes were high for La Salle entering the 2017-18 season, with an experienced starting lineup that featured four fifth-year seniors (B.J. Johnson, Amar Stukes, Tony Washington & Pookie Powell) with another four-year senior (Johnnie Shuler) coming off the bench. Mix in a few intriguing underclassmen, and there was certainly reason for optimism for a program that had reached the Sweet 16 in 2013 but had been generally mediocre at best in the four years since.

But for the fifth season in a row, La Salle was never able to quite find its rhythm; the Explorers took their opening three games but then only one other time -- Feb. 24 & 28 -- did they win consecutive contests, finishing 7-11 in A-10 play and 13-19 overall after bowing out to UMass in the opening round of the Atlantic 10 tournament. Ultimately, there just seemed to be something missing from the lineup: the energy that existed back when the Explorers made their run to the second weekend of the tournament.

Johnson (20.8 ppg, 8.3 rpg) and Powell (16.9 ppg, 4.2 rpg, 4.3 apg) both had strong individual seasons offensively, while four-year stalwart Stukes (8.5 ppg, 3.1 apg, 2.5 rpg), who played in 126 career games with 102 starts, had his best career campaign while providing emotional leadership. But they didn’t get enough inside from Washington (7.7 ppg, 6.3 rpg), who couldn’t quite get over his fouling issues, and nobody besides Johnson and Powell averaged in double-figures. There were issues from beyond the arc, both offensively (33.0 percent, 10th in the A-10) and defensively (38.1 percent, 13th), and they were 11th in the 14-team league in assists per game well. That proved to be enough for the La Salle administration to move on from head coach John Giannini after 14 years, hiring former Villanova assistant Ashley Howard in April.

Penn Quakers
After closing out the 2016-17 season winning six of its final eight regular-season games, including a win over Harvard in the season finale, and then taking top-seeded Princeton to overtime in the Ivy League tournament, it seemed like the Quakers were on the verge of a breakthrough season after missing out on 10 consecutive NCAA tournaments, the longest streak for the program since the 1960s. The non-conference was promising, with a 9-5 record and a couple nice wins, like on the road at Dayton, but Ivy play was something else entirely. Penn won its first seven games of league play and finished atop the Ancient Eight with a 12-2 record, losing only at Yale and Harvard, before capturing the second-ever Ivy League tournament by beating those same two schools in succession.

It seemed like the entire roster took a step forward from the year before. Senior point guard Darnell Foreman became the heart and soul of the squad, averaging 10.7 ppg, 4.5 rpg and 3.5 apg along the way. Sophomore guard Ryan Betley led the Quakers in scoring (14.3 ppg), making 39 percent of his 3-pointers, after finishing his freshman year as strong as anyone on the team; his classmate, A.J. Brodeur (13.1 ppg, 7.2 rpg) continued to develop into one of the top post players in the league. Senior Caleb Wood became a reliable 3-point option off the bench, averaging 10.2 ppg in only 19.6 minutes. Max Rothschild, Antonio Woods and Devon Goodman all played big roles as well in the 24-9 season, which ended in the opening round of the NCAA Tournament with a loss to top-seeded Kansas that saw Penn within four points with 12 minutes to play.

Saint Joseph’s Hawks
In his 23rd season at St. Joe’s, Phil Martelli again experienced what seems to be a recurring theme for his program: crucial injuries to key players derailing a promising season almost before it began.

While senior point guard Shavar Newkirk was just recovering from his ACL injury that occured his junior year, his teammates were beginning to take his place on the sideline. Sophomore standout Charlie Brown broke his left wrist in practice in mid October, Junior point guard Lamarr Kimble, who’d averaged 15.5 ppg as a sophomore before breaking his foot in February 2017, re-injured the same bone in the first game of his junior season and sat out the entire year. Injuries also glued junior Pierfrancesco Oliva (knee) and sophomore forward Lorenzo Edwards (shoulder), to the bench for the entire season.

Despite this, the Hawks rallied to a 10-8 record in the Atlantic 10, reached the semi-finals of the A-10 Tournament, ending in a loss to Rhode Island, and went 16-16 overall. Newkirk lead the charge with command over the front court, as the leading scorer with 17.4 points per game. Freshman Taylor Funk solidified his spot as an impact player as the third-leading scorer with 11.8 points per game, shooting 39.4 percent from three. After being sidelined six weeks with a stress fracture in his left foot, senior wing James Demery averaged 31.8 minutes, 14.5 points, and 6.5 rebounds in 20 games played.

Temple Owls
The Owls’ season started with as much promise as anybody else in the city, capturing the Charleston Classic by beating Old Dominion, Auburn and Clemson in succession to open up 3-0 and garner some Top 25 buzz. But that proved premature, as the Owls went an uninspiring 4-4 to finish out the non-conference slate, then dropped five of its first six American Athletic Conference games to fall well behind contention in the AAC, not to mention put its at-large NCAA Tournament hopes on life support. Then, all of a sudden, Temple found some rhythm, the insertion of freshman guard Nate-Pierre Louis into the rotation proving to be a sparkplug, and a run of seven wins in eight games left the Owls at 15-10 (7-6) midway through February. But the magic ran out with losses in four of five to end the regular season, and they bowed out in the AAC quarterfinals and the first round of the NIT.

There was certainly the talent to be competitive on Temple’s roster, including a strong backcourt of sophomore guard Quinton Rose (14.9 ppg, 4.3 rpg), junior Shizz Alston Jr. (13.3 ppg, 3.1 apg) and senior Josh Brown (9.1 ppg, 3.4 apg), while Pierre-Louis gave them 7.5 ppg and 3.0 rpg in just under 17 minutes off the bench. Senior forward Obi Enechionyia took a step backwards, however, going from 13.1 ppg and 38.5 percent from 3-point range as a junior to only 10.8 ppg and 35 percent as a senior, and without much offensive production from the ‘5’ spot, Temple’s offense at times became too guard-dominant and was overall too inconsistent.

Villanova Wildcats
If the last college basketball season taught us anything, it’s this: Villanova is now officially one of the blue bloods of Division I hoops. The Wildcats’ second national championship came on the back of their fourth consecutive season with 32 wins or more, their fifth straight as Big East champions (either regular season or conference tournament) and undefeated Big 5 champions. There was a Battle 4 Atlantis championship, a 41- point win over rival Saint Joseph’s, a 16-point neutral-court win over Gonzaga, six straight double-digit wins in the NCAA Tournament. It was difficult, surely, but it didn’t look like it. Jay Wright’s Wildcats were a machine, and there wasn’t much anybody could do to stop them.

Six different players averaged double-figures, led by a quarter that are now all suiting up in the NBA: national college player of the year Jalen Brunson (18.9 ppg, 4.6 apg), who got his degree in three years as if to prove there was nothing he couldn’t do. Mikal Bridges (17.7 ppg, 5.3 rpg), the kid from Great Valley turned lottery pick; Donte DiVincenzo (13.4 ppg, 4.8 rpg, 3.5 apg), the former Salesianum (Del.) standout and redshirt freshman Omari Spellman (10.9 ppg, 8.0 rpg), the most offensively talented big man in Wright’s tenure and arguably the best 3-point shooter on the team (43.3 percent). How the program fares without the above quartet is one of the biggest question marks heading into this season, locally or otherwise.