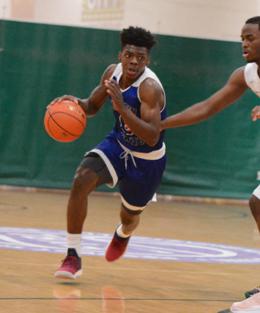 Christian Ings (above) will join a Philly-heavy roster at Rider next fall. (Photo: Josh Verlin/CoBL)

Even though Chris Ings will be leaving the state for college next fall, it will probably feel like he hasn’t left his hometown.

A rising senior at Neumann-Goretti, and a resident of North Philadelphia’s Hunting Park neighborhood, Ings has chosen to take his talents to Rider University next fall, joining a large contingent of Philadelphia-area talent on the Broncs’ roster.

When he arrives on campus for the 2019-20 season, barring transfers there will be at least eight players from the Philadelphia area at the Lawrence (N.J.) institution.

“Seems like Philly players know where to go,” Ings told CoBL over the phone on Thursday. “How close it is, and it’s a great school for athletics and academics, and its only 45 minutes from South Philly so it’s close but you can still get away and have your own life in New Jersey, but then come home if you need to.”

Philly products Ahmad Gilbert (Constitution), Kimar Williams (Constitution), Stevie Jordan (Conwell-Egan), and Ajiri Johnson (Bonner-Prendergast) have all been in contact with Ings since he committed last week. They’ve been stressing the idea of a family environment to Ings, stressing how tight the players are and how that helps them succeed on the court.

“I already know how [my teammates] play,” Ings said. “I’ve played with them. We already have a tight knit community and it will help us in the long run because we enjoy each others company. We all feel like we’re family and it will be hard to guard us.”

One additional incentive of attending the same school as some of the guys he grew up playing with is that during their college careers, they won’t have to face each other. There is one specific player Ings is glad he won’t have to face again -- Ajiri Johnson.

Johnson, a 2018 graduate of Bonner-Prendergast and high-flying defensive-minded big man, defeated Ings and Neumann-Goretti in the only matchup they had in the Catholic League this past year, 73-70. Johnson terrorized opponents with his defensive presence and incredible shot-blocking abilities.

“Really happy I don’t have to play against him again,” Ings said.

The man these kids from Philly all want to play for is two-time MAAC coach of the year, head coach Kevin Baggett. After being picked to finish seventh in the conference last year, Baggett, now entering his seventh year at the helm, led the Broncos to a share of the league title.

Ings said he has been up to see Rider and the coaches two or three times, all unofficial visits or elite camps. He plans to take an official once the school year starts this fall, Ings hopes he can take his official with his future teammate Powell.

“I took a couple of visits up there and met with the coaching staff and players and stuff. Very family oriented environment,” Ings said. “The feeling just seemed right to commit. There’s no point to hold it off any longer if I knew what I was going to do.”

Going into the 2018-19 season, Rider will boast a roster with two seniors. The majority of the team will still be around when Ings shows up on campus.

Guards Jordan Allen -- a Delaware native -- and Stevie Jordan, who both averaged over 12 points a year ago, will both still be on the roster when Ings shows up. Rider finished with a record of 22-10 (15-3 MAAC) last year, and lost to Oregon in the first round of the NIT.

As he led Neumann-Goretti to a 23-6 record and a PIAA 3A state championship last year, Ings scored 11.2 points per game, and was first team All-Catholic League.

Ings has the athleticism and energy to make any coach happy, and can get to the rim. So for the past month and half, Ings has been constantly in the gym working on his jump shot, which is the weakest part of his game.

“When that [jump shot] happens, that league could be in trouble,” Neumann-Goretti head coach Carl Arrigale said. “He can be a dynamic guard in that league, it’s a guard driven league, but I think they got a steal for what his talent level could be a few years from now.”

Ings prides himself on his defensive and athletic abilities. At Neumann-Goretti the past three years and with K-Low Elite this summer, Ings has made it quite clear that he’s got the ability to impact a game without the ball. He’s looking forward to teaming up with a bunch of guys who have the same mindset that he does come next fall at Rider.

“In today’s game, people don’t play too much defense,” Ings said. “They just rely on the big men to block the shot or just a miss. Having a team full of defenders makes the game easier for us and the coach, so we can get out and get fastbreak points and makes the coaches job easier, and it makes us all look better.”