La Salle's Kiszka overcame health isssues to get to Princeton 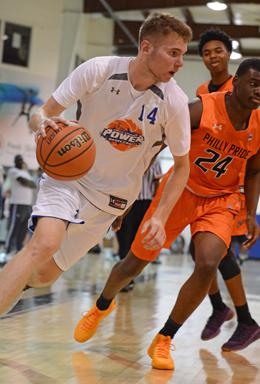 It was early in January, several days before Konrad Kiszka’s La Salle College HS squad played against Archbishop Carroll that the junior felt his heart beating “a little weirdly.” When his heartbeat returned a few minutes later, Kiszka forgot about it.

Until the problem returned, and worse, the night before the game.

“It was getting hard to breathe and my chest felt pretty heavy, and they rushed me to the emergency room,” Kiszka recalled on Monday night. “At first, they said it might have been just a one-time thing, and they reset my heart.”

Kiszka played in the Archbishop Carroll game on Jan. 12 -- though he came out at halftime -- and the one that followed against Cardinal O’Hara, entering off the bench. Then the problem came back, yet again.

This time, the doctors confirmed Kiszka had atrial fibrillation, a relatively common issue characterized by, according to the American Heart Association, a “quivering or irregular heartbeat,” and affects “at least” 2.7 million Americans.

After battling through knee and ankle injuries over his first few years of high school, the heart issue was the lowest point yet for the son of Polish immigrants Robert and Marta Kiszka, who’d dreamed of playing Division I basketball since he was a young boy growing up in Newtown, Pa.. Luckily for him, “a-fib,” as its known, is a manageable condition, not as dangerous as heart issues like cardiomyopathy that have killed numerous athletes and forced others to the sideline permanently.

“Maybe right when it happened [I was worried about it being career-ending],” Kiszka said, “but then I did some research and the doctors were telling me about all these other players that had it. So I wasn’t really worried, but it was definitely scary.”

Kiszka’s basketball career is, indeed, far from over. It’ll continue for at least four more years, as the rising senior committed to both play and study at Princeton on Monday morning.

Tigers head coach Mitch Henderson officially offered Kiszka a spot on the team -- Ivy League schools don’t offer athletic scholarships -- earlier this summer, after the program’s elite camp. They’d been recruiting the 6-7 wing since the summer prior, intrigued by his size on the perimeter and mix of skill, athleticism and upside. The interest was mutual.

“Me and my family love it -- great academics, great athletics, I like the team and the coaches, they all treat me well and I think I’m going to succeed there,” Kiszka said. “And [committing] today, just because they’ve been talking to me for a while and I just thought it was the right time, with AAU almost ending, I just wanted to play the rest of the July period and not have to worry about it.”

They’ll join a program that’s won 20-plus games in six of the last nine seasons, winning the Ivy League and earning its automatic NCAA Tournament berth in 2011 and 2017. The Tigers are no longer one of just two powerhouse teams in the Ivy along with Penn, but those two longtime rivals are part of the new top half of the league that also includes Yale and Harvard.

Last year, the Tigers went 13-16, including 5-9 in the Ivy League, after the graduation of a key senior class in 2017. But a high-level freshman class has them trending back upwards in 2018-19, and Princeton typically isn’t down for long.

Kiszka said he isn’t sure yet what he plans to major in, though he does have some long-term thoughts.

“I’d like to, right after college, try to play somewhere professionally,” Kiszka said, “but then once basketball’s over, I’ve been thinking of medicine, because of all these injuries I’ve been having...I found it really interesting, and I like being around all that stuff.”

When Kiszka came back from his heart issue, after missing four Catholic League games, he finished his junior season on a tear, averaging 14.2 ppg over the last six games, and 10.3 ppg on the season.

With the issue managed by medication, Kiszka could just play ball.

“You’re walking around and you’re not sure medically as a 16-year-old, 17-year-old, you’re not sure what it means and how hard you can practice, you’re getting all these cardiac type tests,” said Joe Dempsey, who coached La Salle for 14 seasons before his unexpected dismissal this March. “He really put that behind him both physically and mentally.

“I think they’re going to get a steal,” Dempsey added. “I think athletically he’s a mid-major player, I think his best days are ahead of him. He’s much more coachable than he was, his motor and his IQ have increased tremendously and he’s a great teammate, he’s become a good leader.”

Expectations will be high this year for Kiszka and his classmates, 6-9 forward Zach Crisler and 5-11 point guard Allen Powell, to carry the load for a team that will be playing under first-year head coach Mike McKee.

La Salle hasn’t made it to the Catholic League Final Four at the Palestra since 2015, the year before that group arrived at the school’s Wyndmoor campus. If they make it back this year, you can bet Kiszka will be soaking in every single second along the way.

“Definitely, I have a bigger appreciation for the game,” he said. “I love to play, and I’m just glad I still get to be out there playing.”