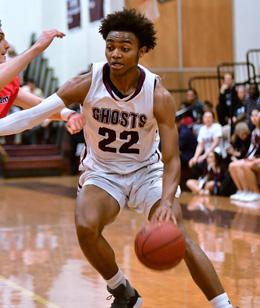 Lucas Monroe (above) became the second Abington rising senior to commit to a Division I school this spring. (Photo: Josh Verlin/CoBL)

In fact, Monroe, who played soccer growing up, said he "hated" basketball until he was about nine or 10 years old.

Monroe looked up to his older brother, Jordan, who was seven years his senior. And Jordan played basketball, so Monroe’s path to the hardwood was inevitable.

“I would watch my brother do all these things, and he was like my hero when I was younger, so anything he did I wanted to do,” the rising senior at Abington High School said. “I would steal his basketball shoes and wear them, even though they were way too big for me...He kind of got me starting to want to play because I wanted to be just like him.”

Like many other young basketball players, Monroe began dreaming of playing in college.

He gave up soccer after eighth grade as he began to take basketball more seriously. Monroe received his first letter from a college in ninth grade and started to realize playing at the next level was a reality as more and more schools began to contact him.

The Abington wing paired his athletic ability with strong academics, and on Thursday those dreams came true when he announced his commitment to the University of Pennsylvania. He chose the Quakers over several Ivy League and Patriot League schools.

“Playing basketball as long as I could, once I started getting serious about it playing AAU, that was always a goal of mine,” Monroe told CoBL beforehand. “I realized what could set me apart was my grades. A lot of great athletes don’t necessarily get the grades to get into a school like Penn

“Once I realized I could take advantage of my basketball skill and my good grades and I could get into a college like this, which is one of the best schools in the world, then that became a realization of mine maybe last year. I know basketball is not going to last forever, so I might as well get the most out of my college experience.”

Lucas Monroe with gets the bucket and the foul. Abington up 14-6 early on. pic.twitter.com/iA6Vwyb73F

Monroe is the second Abington rising senior to commit to a Division I school this spring.

Monroe’s classmate, junior forward Eric Dixon, also decided to stay in the Philadelphia-area, penning with Villanova in April. Now they'll play against each other in the Big 5.

The two D-I recruits helped Abington win two District 1 Class 6A championships during the past two seasons. Having teammates who waded through the recruitment process -- senior guard Robbie Heath also has scholarship schools on his trail -- was a help to Monroe when he was making his college decision.

“I talked to both of them about it, what kind of things they looked for, how they calculated everything and the pros and cons of how they chose where to go,” Monroe said. “It was really helpful having two people who were really close to me, who I’ve known for a long time, that had been through the process.”

Monroe is a 6-foot-6 lefty who can handle the rock, distribute to teammates and use his length to guard multiple positions.

While Dixon and Heath were the go-to scorers for Abington, Monroe stuffed the statsheet in a variety of ways. In the district championship win against Plymouth Whitemarsh, he tallied 12 points, six assists, six rebounds and three steals.

Monroe's guard skills and size will help him out in the Ivy League. He said the fact that his father, Eugene, who played at Dobbins Tech and East Carolina, and his brother, who played at Abington, were both point guards is a huge reason why.

Monroe grew up watching his father take his brother through a variety of drills to hone his skills. When Monroe got older, he spent his summers going through the same drills with his father at Ardsley Park near his home in Glenside.

“He thought that everyone should be taught to play the point guard position at a young age,” Monroe said. “Just because a lot of those basic skills translate to other positions in terms of footwork and hand-eye coordination and those skills that you have with your hands.”

“He kind of instilled a lot of the fundamental skills that I have now,” he added.

Lucas Monroe battles for a tough basket underneath. pic.twitter.com/zP7gWG7dpw

Penn, which is coming off its first NCAA Tournament appearance in more than a decade, is a relatively young team. The Quakers will bring back four starters next season, including leading scorers Ryan Betley and AJ Brodeur, who both have two years of eligibility remaining.

While he knows minutes might be sparse upon his arrival, Monroe thinks his versatility might help him make an impact sooner rather than later.

“They use a lot of ball movement,” Monroe said. “Rather than just isolation or one-on-one, they really move the ball well. They also like big guards, so I think I can hopefully come in right away and be plugged into a lot of different spots on the court because everyone is pretty interchangeable in their offense. They also like guys who understand how to play the game.”

Monroe will spend the summer playing on the Nike EYBL circuit with Team Final. After that he’ll have one more year at Abington.

He said he hopes to improve his jump shot and continue to work on his offhand in the year he has before joining the Quakers.

Without Heath, who is the second leading scorer in program history, around next season, Monroe will also be asked to create more on the offensive end for the Galloping Ghosts.

“I’m going to be forced to score more this year with Robbie leaving or at least be more aggressive,” Monroe said. “Not necessarily taking a lot more shots, but being more aggressive to make plays because he was a great playmaker....So just improve my jump shot, so it’ll be harder for me to guard and then I can get into the lane and make plays for the shooters and Eric and all the other guys.”

With Dixon and Monroe back next season, Abington should enter the 2018-19 campaign as one of the best teams in the area and have a very good chance at repeating ast District 1 champs.

Though he’s excited to get to Penn, Monroe said he already knows he’s going to miss his time at Abington when he leaves.

“I wish I could do high school again,” Monroe said. “I know I have another year of it, but I love playing with Eric and Robbie and all the other guys. It’s been amazing. Especially playing at Abington, the community they really support us, they love us and I think we represent them pretty well. … Some of the games I think will be the most of fun I’ve ever had playing basketball. No matter how long I play I think I’ll remember these games a lot.”