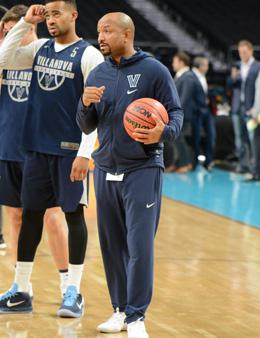 Ashley Howard (above) spent five years as a Villanova assistant before his hiring at La Salle. (Photo: Josh Verlin/CoBL)

La Salle announced the hiring of Villanova assistant coach Ashley Howard as its newest head coach on Sunday afternoon. The news comes a little more than two weeks after the school announced it was parting ways with 14-year head coach John Giannini.

Howard, who played at Monsignor Bonner and Drexel, spent four seasons as an assistant at La Salle under Giannini from 2004-08. He then went on to coach as an assistant at Drexel from 2008-12 before spending one year at Xavier and the last five seasons at Villanova.

The university will formally introduce Howard with a press conference at 11 a.m. on Monday.

"It's an honor and a privilege to be named the head coach at La Salle University," Howard said in a university-released statement. "I chose to coach at La Salle early in my career because of its incredible tradition in the Big 5, its dedication to athletic excellence and its commitment to its student-athletes.

“To have the opportunity to return to campus and lead this storied basketball program – a program defined by greats such as Gola, Durrett, Brooks, Simmons and Butler – is one for which I'm deeply appreciative.”

Howard is the second assistant in two years to leave Villanova coach Jay Wright’s staff for a head coaching gig. Last season Baker Dunleavy left Wright’s staff to become the head man at Quinnipiac, where he went 12-21 this past season.

“(Howard) is an outstanding coach who made a great impatct on our @NovaMBB program and @VillanovaU family in his five years with us,” Wright tweeted shortly after La Salle announced the hire. “(La Salle) has made a terrific selection and all of us at Villanova are thrilled for Ashley, Ariana and Journey.”

Howard will have his work cut out for him in his first year on the job. The Explorers graduate three of their top five scorers in forward B.J. Johnson, center Tony Washington and guard Amar Stukes. Johnson led the Explorers in scoring and rebounding last season, averaging 20.8 ppg and 8.3 rpg. At the moment it’s unclear if redshirt-junior guard Pookie Powell (16.9 ppg) will be granted an extra year of eligibility next season.

Sophomores Isiah Deas (9.5 ppg) and Saul Phiri (6.2 ppg) are the Explorers top returning scorers for the time being. Freshman forward Miles Brookins and freshman guard Jamir Moultrie both averaged more than 10 minutes per game as well.

Howard’s first order of business will be trying to make sure that class stays intact.

"As a former assistant coach here, we know firsthand that Ashley Howard is an exceptional coaching talent who has a deep understanding of both La Salle's basketball tradition and its important student-focused mission," La Salle Athletic Director Bill Bradshaw said in a university-released statement.

"He is a high-energy leader with a tremendous basketball pedigree as well as a strong track record of recruiting, developing and mentoring high-quality student-athletes,” Bradshaw added. “His experience, especially in the past five years, reflects that Ash knows how to win. We are delighted to welcome him home to La Salle University."