Paschall's rediscovered 3-point shot is a blessing for 'Nova 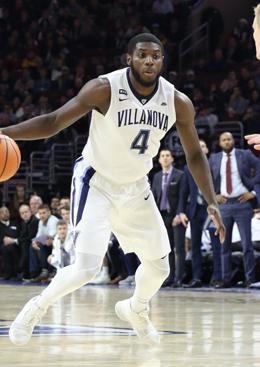 Eric Paschall (above) went from hitting four percent of his 3-pointers to over 40 percent over the course of the 2017-18 season. (Photo: Josh Verlin/CoBL)

SAN ANTONIO -- It might be hard to imagine, but Eric Paschall was a skinny two-guard in high school.

He was known as a complete scorer, one that could pull up from anywhere on the court. Defense wasn't the strongest aspect of his play, but he could mesmerize an  audience with his ability to dunk from a young age and soon after -- a three-point shooting range that went way beyond the painted lines on the court.

Fast forward a few years, starting off his redshirt junior season as a 6-foot-9, 255 pound forward, it's definitely difficult to picture.

Paschall, now leaner and taller, no longer plays in the backcourt. Instead, he's a member of Villanova's frontcourt, playing with the force and physicality to bump opponents down low. He's learned the necessary skills to defend big men. No longer does he rely on flashy and finesse crossover dribble moves.

During this transition, it seemed like he had lost his three-point shot.

At Fordham, he shot a subpar 31.5 percent from long range. In his first full season with Villanova, it got worse, as he only converted on 27.9 percent of his takes from beyond the arc.

The regression continued to start the year. Through the first 14 games of the season, Paschall made only 2-of-27 (7.4 percent) three-point shots. Since then, Paschall seems to have rediscovered his shooting stroke, knocking down a revitalized 46.4 percent of three-pointers.

"Just working with the coaches," Paschall said of his improved performance from beyond the arc. "Just staying in the gym as well, They did a great job of just staying with me, knowing that I was struggling, and I didn't really think about it."

With the help of the coaching staff, Paschall tinkered with his shooting mechanics throughout the season. Spot up shooting drills and repetition in the gym -- combined with a persistent confidence in his shot -- helped him shoot his way out of his early-season struggles.

His most recent performance was a testament to the progress he's made this season. Paschall scored a game-high 24 points in Saturday's Final Four game against Kansas, including a 4-of-5 performance from long range. His struggles earlier in the season now seem hard to imagine, as nearly every shot dropped for him.

"When we started this season it was unbelievable," Villanova head coach Jay Wright said. "He couldn't make a shot, and I know people are saying, 'why do you let him shoot it?' But we knew, we had seen two years of him shooting the ball extremely well. So we just, as he said to him, just keep shooting. We know you're a good shooter."

Thanks to his refined play, he's helped make the deep-shooting, trigger-happy Wildcats loaded with a starting five that can take and make the three.

Paschall enjoyed a solid individual performance, his highest-scoring ever since joining the 'Cats back in 2015. However, it was also a big one for the program, assisting Villanova back to the National Championship Game.

Aside from that -- with 10:17 remaining in the first half -- he knocked down a corner three to give Villanova its 443rd trey of the season, breaking the previous DIvision I record set by VMI in 2007.

"Coaches were getting his mechanics right and things like that," teammate Mikal Bridges said. "He always had confidence, once he started changing his shot and shooting more every day, he got confidence even more -- put him in the spot he's at right now."

It's been quite the journey for Paschall, who was the star in high school at Dobbs Ferry (N.Y.) before spending one last year at St. Thomas More (Conn.)

At Fordham, he was the 2014-15 Atlantic-10 Rookie of the Year, and was the Rams' leading scorer as a freshman. Although his three-point shot wasn't consistent, he still averaged an impressive 15.9 points per game.

"He was a volume shooter at Fordham, where he made threes, but he took a lot of threes, didn't shoot a great percentage," Wright said. "But as soon as we got him -- as soon as he came, the year he sat out -- he worked really hard."

Paschall's play on Saturday shifted the focus to him. While there was plenty of pregame chatter about the duel between National Player of the Year finalists Jalen Brunson and Devonte' Graham, fans were chanting his name by the end of the game.

He had to sit out in the Wildcats' previous trip to the Final Four, per NCAA transfer rules. He patiently waited his turn. Now a full participant, Paschall is relishing in the moment.

"Two years ago, it wasn't a problem," he said. "I had great teammates that just always talked to me. I had great coaches that always worked with me and kept in contact and always made sure I was fine. Tonight, just playing with my brothers is always a blessing. We get another opportunity to do that, and I look forward to it."