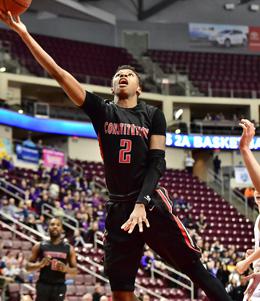 HERSHEY — As the gold medal dangled comfortably from his shoulders late Tuesday afternoon at nearly empty Giant Center, Keshaun “Champ” Hammonds flashed one of those satisfied looks as the talented youngster chatted candidly about his latest hoops performance.

And while Constitution’s 6-0 sophomore guard was extremely pleased about his own splendid effort, what doubled his pleasure was what he and his teammates had been able to accomplish.

Especially since the last time Hammonds and the Generals checked into Chocolatetown, they checked out with disappointed looks on their faces and less-satisfying medals in their gym bags.

Hammonds scored 23 points, while junior Jabari Merritt popped a dandy double-double (20 points/12 rebounds) as Constitution made its return to Giant Center a successful one by turning back a feisty Our Lady of the Sacred Heart bunch 81-71 and claiming a PIAA Class 2A championship.

“This is great for my seniors, my team, my school.”

Damon Wall added 15 points and Jahmir Marable-Williams finished with 11 — Marable-Williams dished out seven assists — for Rob Moore’s remarkably balanced Generals (21-11), who collared their fourth state title since 2012 and their third at Giant Center.

Twelve months earlier, Constitution was denied No. 4 in overtime by a Sewickley Academy squad (68-63) that tumbled to OLSH in OT in last week’s state semis.

Austin Wigley paced the youthful Chargers (26-4) with 25 points — Mike Rodriguez’s roster did not sport a single senior — while Ricco Tate posted a double-double (14 points/12 boards) and freshman Dante Spadafora banked all of his 13 points before the halftime break.

OLSH also played without 6-6 sophomore Donovan Johnson, who missed his second straight game with a leg injury. Johnson was averaging about 18 points per game.

Yet for a remarkably successful Constitution program that talked openly about returning to Hershey — even before preseason practice officially got underway — just making another jaunt to southcentral Pennsylvania wasn’t enough. The Generals were determined to bounce out with the dub.

Helps explain why Hammonds, who logged plenty of minutes in last year’s final, displayed all sorts of want-to as soon as the ball went up and didn’t slow down until the final buzzer sounded and the post-game celebration promptly commenced mere feet from the midcourt logo.

Back-and-forth throughout the opening 10 minutes, Constitution finally generated some separation by uncorking a 15-3 salvo that featured seven Hammonds points.

While Hammonds’ theft and finish gave the Generals a 28-22 lead, his 3-ball and another score at the rim had the Philly Public League entry up 37-25 with 2:44 to play in the opening half.

Although OLSH rallied and drew within two on a pair of Wigley free throws, Hammonds would bury another trey just before the halftime horn, handing Moore’s bunch a 41-36 lead.

“Every time I had the ball in my hands, I felt confident,” Hammonds said. “It just came naturally.

“I just felt like when I had the ball in my hands, I could do anything.”

“He was amazing today,” Moore said of Hammonds. “He was there last years, so he knows what it was. … For Hammonds to be that guy and to step into that role this season was big.

“Obviously, Jabari was big for us also.”

Constitution may have opened the second half with a 14-2 spurt — and the Generals were still up 61-45 with 2:52 left in the third quarter following Merritt’s conventional three-point play — OLSH would not go away as Rodriguez’s Chargers closed the third with an 8-0 burst.

OLSH was still down four (67-63) with three minutes to play following the hard-working Tate’s putback, Hammonds fueled another burst by canning a 3-ball and tacking on a finish in transition.

“With our team, we know we can score at any time,” Merritt added.

Also helping the Generals was the collective 9-for-10 performance they enjoyed at the free-throw line in the fourth quarter.

“Being able to close out today was big for us,” Moore admitted. “Hitting the free throws late and protecting the basketball, because we knew they were going to make pushes. And obviously they have a ton of talent over there, so hats off to them.”

There were a lot of things to like about Constitution’s latest outing since lots of things went well.

Merritt, who spent last season at Roman Catholic before joining his buddy Hammonds at Constitution, was extremely consistent throughout. In addition to scoring 10 points in each half, Merritt snared eight rebounds after the break, finished with a handful of blocked shots and dropped three dimes.

“I push him to do better,” Merritt added. “When we get on the court, I look at him and he looks at me to make sure we’re both in the game.”

Merritt might not have been involved in Constitution’s run to Hershey a season ago, but he was just as pumped up following Tuesday’s outing as his Generals teammates.

Hammonds and Merritt, in fact, are already determined to make yet another excursion to Hershey so they can chase even more state gold. They might find OLSH back on the other bench or it might be a Sewickley Academy group that had three sophomores and a junior it its lineup.

“We just want to get here,” Moore said. “Then we’ll worry about [who we’re playing].”

“I want to be standing here next year,” Hammonds added.

“I want to be standing here next year, for sure.”