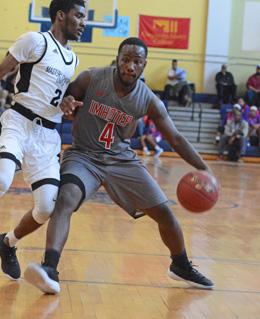 Bernard Lightsey (above, in Jan.) led the way as Imhotep made it back to the PIAA Class 4A state championship. (Photo: Josh Verlin/CoBL)

When Bethlehem Catholic jumped out to a 13 point advantage four minutes into the first quarter against Imhotep Charter, Imhotep’s head coach Andre Noble wasn’t worried that he might need a timeout to calm his Panthers squad down.

Even in a PIAA 4A state semifinal game, with a trip to Hershey on the line, Noble decided to let things play out.

“When you call timeout you might have to give [opponents] what they want,” Noble said. “We just had to believe in [our] guys a little bit. I’ve had that happen before and we usually respond with some sort of run. They make a run, then we make a run.

Imhotep then went on to score 10 unanswered points, eight from senior guard Bernard Lightsey, and trailed only once more the entire game.

“It’s a trust thing,” Lightsey said. “We play a national schedule, so everybody knows how to play basketball the right way. We always find a way to overcome adversity.”

Lightsey and junior Donta Scott both ignited the Panthers in that quick run -- and in the rest of the contest -- combining for 44 points in a 65-60 win over BeCaHi, sending the defending state title holding Panthers to the state championship game for the fourth time since 2011.

“We are a tougher team when we are under pressure,” Scott said, “It makes us push harder.”

Lightsey hit two 3-pointers in the early stretch, and the 5-foot-11 sharpshooter wasn’t afraid to let it fly from deep. He finished with four 3’s on the night, helping him to 17 total points.

Whenever Imhotep needed a basket to trim the deficit in the opening quarter, Lightsey was the answer.

As the game stayed tight throughout the first half and into the third quarter, Imhotep began to have problems with foul trouble in the front court.

But luckily for the Panthers, who are ranked seventh in the country according to USA Today, frontcourt depth is usually never an issue. Imhotep boasts five players over 6-foot-5, and all of them can make an impact once they step on the floor.

Chereef Knox, a 6-6 junior, and Elijah Taylor, a 6-8 sophomore, both needed to be sidelined in the second and third quarters so they wouldn’t foul out.

So in stepped Marquis Greenwood, a 6-5 senior transfer from Norristown High School. Greenwood, also a football player, came in and immediately challenged BeCaHi’s big men and brothers Ryan Young and Kyle Young for rebounds, and blocked a few shots in the process.

“He gave us some tremendous minutes in there,” Noble said. “All our guys gave contributions. That’s what we needed to win that game tonight.”

Greenwood wasn’t the only contributor off the bench to aid the foul trouble, as junior guards Fatayn Wesley and Karam Cummings both came in for Dahmir Bishop and chipped in on the defensive end, and had some timely buckets. Once Imhotep gets to the state championship, contributions like that will be important if the Panthers want to come out successful.

“I felt these guys played hard today,” Noble said. “I thought the guys fought back. I thought we adjusted and came back well. But I wasn’t really worried about getting blown off the floor. That hasn’t happened to us all year and we’ve played some great teams.”

BeCaHi’s star center Ryan Young, a 6-10 Northwestern commit, scored 11 points, but was also dealing with foul trouble, and was forced to sit with four fouls in the third quarter.

It was his brother, 6-8 junior Kyle, who stepped up in his absence. The younger brother scored 14 points, and grabbed some key rebounds, while his older brother watched from the sideline. When Ryan Young wasn’t in the game, it opened up the paint a little bit and allowed Imhotep, Scott specifically, to score at the rim.

The versatile forward finished with 27 points, 13 came in the second quarter, and eight in the fourth. It seemed that whenever BeCaHi made a comeback, Scott had the crowd-silencer on the other end.

“I was easily getting [to the lane] because we were moving the ball,” Scott said, “But we have to play together. Not one person will get the job done. Need to share the ball, keep our heads up, and keep having fun.”

At 6-7, Scott can blow by his defender on the perimeter, or shoot over them and knock down the long ball at a consistent rate. And once he’s in the paint, his length and athleticism allow him to finish at the rim. In this state tournament run, he’s been arguably the most important piece to the Panthers squad.

“He’s our big point guard,” Noble said. “The last two games, Donta has turned into a really, really, good player. Seems like the button is clicking in his head that he is a really good player. He was huge tonight. Huge.”

Taylor added seven points, Knox had four, and Riggins had three, for the Panthers, who will face Sharon in the 4A state championship in Hershey at 8pm on Thursday night. Sharon defeated Quaker Valley 65-48, in the other semifinal game.

“That’s a big part of what we do, is to be in Hershey,” Noble said. “It would have been really disappointing to not get there.”

“They know how hard we will have to work hard tomorrow [at practice],” he continued. “No one comes to Hershey to lay down, so we need to make sure we’re ready.”