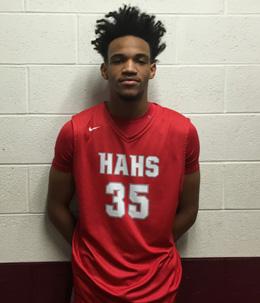 Da'mir Faison (above) and Hazleton beat District 1 champ Abington to advance to the PIAA Class 6A semifinals. (Photo: Michael Bullock/CoBL)

BETHLEHEM — As he and his Hazleton teammates motored down the Pennsylvania Turnpike’s Northeast Extension Saturday morning, Da’mir Faison was just one of the Cougars thinking about how important it would be to get off to a good start and really get things going.

Not only since Mike Joseph’s tall, talented side understood how good the opposition was — in this case it was District 1 champion Abington — but also because the Cougars wanted to send a message indicating how hard they were going to play in order to keep their sparkling season in motion.

Plus, if a message just happened to get sent along the way, so be it.

While Joseph’s Cougars did get off to the good start they envisioned, they never backed off the accelerator during the heated competition that unfolded in Liberty High School’s crowded Memorial Gymnasium and wound up outscoring the Ghosts 94-86 in a PIAA Class 6A state quarterfinal.

Although Faison scored eight of his 20 points in the opening quarter, he wound up getting plenty of help as West Chester recruit Josh Samec paced the Cougars with 33 points, Joey Grula checked in with 19 points and Jeff Planutis tacked on 18 more for a Hazleton bunch that never trailed.

“I can’t thank them enough.”

As a result of Saturday’s success — the 16th consecutive victory for Joseph’s remarkably balanced bunch — the Cougars (26-1) earned a spot in Tuesday’s state semifinals for the first time since 1995, when Bruce Leib piloted another bunch from northeast Pennsylvania into a scrap with Williamsport.

Well, guess who was on hand for Saturday’s festivities? Fittingly, Leib and his wife, Shannon, were among the many who wandered into Liberty’s sizable playpen to see how everything played out.

And don’t be surprised if the Leibs get back on the road Tuesday night, when Hazleton takes on District 12 heavyweight Abraham Lincoln at a site and time to be determined for the right to play for Class 6A gold medals late next week and much more.

Obviously, Abington (24-6) did not go quietly as Eric Dixon piled up 35 points and 15 rebounds before the perspiration-fest was over. Robbie Heath also had a big outing for the Ghosts, netting 29 points and dishing out five assists before a second technical foul ended his day … and career.

Yet while Joseph thought his Cougars would be in terrific shape if they could limit Dixon, Heath and Lucas Monroe to a combined 50 points or fewer, those three wound up sharing 71 points — and his team still wound up leading from opening tip to final buzzer before bouncing out jubilantly.

One obvious reason was Joseph’s Big Four, as Samec, Faison, Grula and Planutis shared 90 of Hazleton’s 94 points. Yet the Cougars also connected on 62 percent (31-for-50) of their field-goal attempts — and shot nearly 44 percent (7-for-16) from the arc.

“I just have to give it to our coaches, they had us prepared,” Faison said. “Every day in practice making sure we knew what we were going up against. How to guard everything they came at us with.”

Quality ball movement also played a role in the Cougars’ victory, but they also probed whenever possible to find the matchup advantages before pouncing.

The 6-5 Grula was effective in the paint at both ends, making eight of his 10 shots, including quite a few when challenged by a single defender yet he also spent much of the game leaning on the broad-shouldered Dixon. Faison also was a problem underneath — although he did bag one of Hazleton’s seven 3-balls — while the 6-8 Samec floated from the mid-range to the 3-point arc and back again while knocking down shots from everywhere. Samec wound up pocketing five treys.

In fact, Samec’s stickback with 2:08 left in the third quarter had Hazleton up 52-38 — the Cougars’ largest lead of the afternoon.

Planutis really flourished in transition, as he was able to leak out repeatedly whenever Abington tried to apply pressure in an effort to play catch-up. Hazleton didn’t flinch either, going for the throat whenever the Cougars solved whatever Charles Grasty’s group tossed at them.

As a result, the District 2 champs were 9-for-9 from the floor down the stretch and 3-for-3 from the arc in a frantic fourth quarter played at a ridiculous pace that could have been played at a drag strip.

Heck, both teams combined for 79 points in the fourth.

“They’re good,” Grasty said. “They made a ton of shots, too. That’s a good team. They have a lot of good pieces. They’re athletic. They’re long. They attack the glass. They jump well.

“And they play the right way.”

Even earlier, the Cougars were making shots as Hazleton connected on 56 percent (14-for-25) of its looks in the first half while cranking up their huge following into a frenzy — especially when Joseph’s group carried a 37-32 lead into the break. Hazleton actually scored the first five points of the game, as Samec dialed up a triple and Faison buried two freebies.

“That was our game plan,” Samec said. “That’s what the coaches wanted us to do. They said we have to get off to a quick start. That’s what we did and it definitely worked.”

Not only early, but also as the third and fourth quarters played out with Abington trying to rally.

Granted, the 6-8, 250-pound Dixon was a beast in the paint down the stretch, keeping the Ghosts within striking distance by netting 18 of his 35. What hurt Abington in the final few minutes, in addition to trying to neutralize Hazleton’s balanced arsenal, was when Monroe (7 points) was assessed his fifth foul with 2:45 to go and Heath drew his second technical at the 1:28 mark.

“We did a tremendous job of making Eric Dixon work,” Joseph said. “He had a ton of points, but he’s a monster. You don’t get an offer from Villanova if you’re not a tremendous player as a junior.

“I can’t say enough about these guys. I love them … and we’re not done yet.”

Abington actually was within five points (80-75) following a Dixon stickback at the 2:02 mark, but Monroe had already been disqualified and Heath would depart a short time later — despite drawing a shooting foul. He bumped Wolk, who fouled him, and that led to the T.

“We had some uncharacteristic plays,” Grasty admitted. “That’s not like us. That’s not what got us here and that’s not Abington basketball. You’re right, it was a five-point game and we came down and took some crazy shots. We got frustrated. I should have done a better job of calming them down, but they’re 16- and 17-year-old boys. It’s emotional and it’s a big crowd.

While the Ghosts were still down eight after all of the free throws were shot (86-78), they never drew closer as Hazleton continued to enjoy success at the line or on the break.

And while the quick start was big for the Cougars — one that came with a message that Hazleton was determined to collar the result dangling before both teams — so was the fast finish.

“We came out and did what we needed to do.”