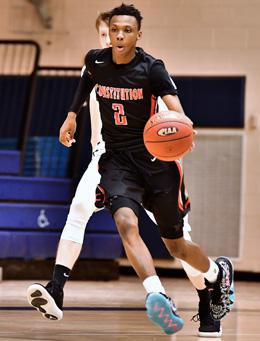 KeShaun "Champ" Hammonds and Constitution dispatched Delco Christian to advance to the second round of the 2A tournament. (Photo: Mark Jordan/CoBL)

KeShaun "Champ" Hammonds remembers the anguish on the face of his teammates.

After falling short following a 68-63 overtime loss to Sewickley Academy in the PIAA Class 2A title game last season, the hunger and drive to get back in that position was the fire that spurred he and his Constitution teammates throughout the season. It also helped to consistently have 2016-17 Associated Press All-State First Team selections Tamir Green and Maurice Waters coming back to provide advice along the way.

The two former Constitution standouts and 1,000-point scorers had tasted both victory and defeat in the state title game during their careers. They were able to provide insight that this year’s group did not have on its roster and Hammonds has been thankful to have that relationship.

“We talk to them all the time,” Hammonds said. “They don’t fade away. Maurice was at our practice yesterday. They’re always there.”

Behind 27 points and four steals from Hammonds along with 12 points and six rebounds from forward Jabari Merritt, Constitution cruised to an 86-53 victory over Delco Christian in the first round of the PIAA 2A playoffs at Council Rock South. The Generals turned up the pressure on the Knights, recording 16 steals in the game.

Hammonds, Jahmir Marable-Williams (three) and Damon Wall (three) each contributed with multiple steals, most of which were converted into points at the other end.

Hammonds scored 10 in the opening quarter and got his team off to a good start, despite some sloppy play. The Generals four turnovers in the opening eight minutes and head coach Rob Moore made sure they knew he wasn’t pleased. From there, Constitution (17-11) controlled the tempo.

“We just kept switching up between multiple different presses just to show them different things then fell into a man-to-man,” Moore said. “Sometimes, we would fake that we were going to double team. We forced them into three or four 10-second violations, which to me is better than a steal because it shows you’re playing defense and you’re locked in.”

A three-pointer by Hammonds, a finish inside by Merritt and finally a layup from Wall (13 points) put the Generals in front 37-25 heading into halftime. The press really seemed to take a toll on the Knights to start the third quarter and rout was on.

Marable Williams, who finished with 11 points, finished a backdoor cut from Hammonds then picked up a steal and converted that to push Constitution’s lead to 45-27 midway through the third. Tyler Penley scored nine of his 16 points for the Knights in that third quarter including and-one from behind the arc, which cut the Delco Christian (16-9) deficit to 51-36.

Constitution, ultimately put the clamps down on the Knights by closing out the quarter on a 14-0 run and 70-38 advantage. The Generals will play Bishop Guilfoyle, who downed Brockway, 80-45, in the next round.

Moore, who is hoping to lead the Generals to their fifth state title appearance in the last seven seasons, feels the team’s relationship with past players have been indispensable.

“Our alumni always come out,” Moore said. “It’s important for them to understand there are some expectations and a lot of the alumni are like, ‘Listen, we’re used to the state and Public League championships. There’s an expectation of playing in these games.’”

While it was the first round of the state playoffs, Hammonds stressed that this was that first step to not only getting over last year’s title game loss but also the loss to Martin Luther King in the Public League quarterfinals as well as a playback to Math, Civics & Science.

“We had to pick it back up because we knew that we wanted to win states,” Hammonds said. “We had to fight harder, grind harder and push each other in practice. We had to win and that’s what we did. We came out here prepared and now we have to prepare for the next game.” 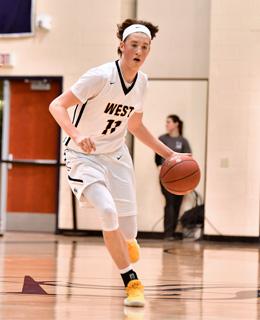 Shane McCusker was there the last time Central Bucks West advanced to the state playoffs.

He was sitting on the bench as the Bucks fell to eventual champion Roman Catholic. While he did not play an integral part with that team, he still remembers what it felt like to lose a matchup that his team was in for much of the game.

“I was on the team two years ago but I didn’t get to taste it that much,” McCusker said. “This is my first real go-around. I’m excited because we live to see another day.”

McCusker scored 16 points including four three-pointers while adding six rebounds and three assists to lead Central Bucks West to a 53-35 win over Emmaus in the opening round of the PIAA Class 6A Tournament. McCusker hit three treys in the opening quarter to give his team an 11-7 lead early on.

With fellow senior teammate and D-II California (Pa.) commit Collin MacAdams (4-of-10 from the field) controlling the game in other areas with four rebounds, three assists and two blocks, McCusker took advantage of Emmaus’ perimeter defense that continually gave him plenty of room to shoot. The second quarter was all MacAdams and McCusker. MacAdams made a gorgeous swing through and finished with a left-handed dunk to give the Bucks a 23-14 lead with 4:39 left before halftime. He finished with six in the quarter.

McCusker’s final basket of half came with just second remaining as he converted a tough finish to help Central Bucks West (21-6) close it out on an 8-2 run. Head coach Adam Sherman, whose team led 32-18 at the break, noted McCusker’s success outside was due to the Hornets having to change up their defense.

“We were able to get their big guy in foul trouble and forced them to go zone,” Sherman said. “That opened up opportunities for Shane to get wide open shots. We’re excited to watch him shoot the ball well. That really opened things up for us. We’re a much better team when we’re front running than trying to claw from behind.”

Sherman was referring to Emmaus’ 6-8 forward Zach Sabol, who picked up his second foul in the first quarter and sat on the bench for much of the first half. Sabol returned to the starting lineup in the third and made his presence hit with three of his team’s first five points on the quarter to close the gap to 33-22. Emmaus (14-13) forward Josh Artis provided a nice spark with four of his 12 points in that third quarter.

Bryce Diehl hits a trey just before the third-quarter buzzer and the Hornets only trailed by eight. Sabol sagged off Jake Reichwein, who finished with 10 points, and the 6-3 senior forward nailed a three-pointer. On the ensuing possession, MacAdams finished in transition then McCusker hit his only basket of the second half to put Central Bucks West up 43-30 with 3:39 left. Sabol, who finished with three points, eight boards and three rejections, fouled out nine seconds later as the Bucks were putting the finishing touches on a strong victory.

The Bucks had been waiting for the opportunity to return to the state playoffs and Sherman stressed getting back to this spot early on in open gyms prior to the season.

“All summer long you talk about playing basketball in March,” Sherman said. “That’s what it’s all about. We’re excited to be playing in March and we’re hoping we can take that one step further.”

“They have all of the pressure on them because they’re the defending champs,” McCusker said. “We’re going to go in, give them a good game and hopefully come out on top. It’s the playoffs so anything can happen.”