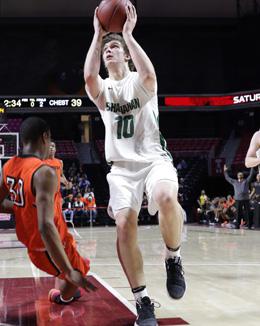 Coming into the PIAA 5A first round state tournament game against Hershey High, Bishop Shanahan’s senior forward Kevin Dodds needed 21 points to hit the 1,000 point mark of his career.

With about six minutes left in the third quarter, Dodds sensed he was in the neighborhood, but wasn’t exactly sure how many more he needed.

However, his coach Ken Doyle was aware. And he didn’t want Dodds to know.

“I try to keep stuff like that because he might put pressure on himself,” Doyle said on Dodds. “He’s a very quiet and reserved kid. Let’s just get a second game and we’re more comfortable for him to [score 1,000]. Seniors and players on the team knew what he needed, we just didn’t tell [Dodds].”

Fortunately for Dodds, he heard a pretty important message relayed to those on the bench.

“When I was at the defensive end of the foul line,” Dodds said, “I saw [Doyle] say to my team on the bench, ‘he needs four more.’ I saw that and was like, ‘okay, let’s go only four more.’”

The following possession, Dodds threw down a dunk coming down the lane, giving him 998 for his career. Then he was fouled, but only made one of the free throws, which brought him to one point away.

“Needed one more free throw, and of course the next free throw was a sledge and I was laughing,” the 6-6 forward and Gannon (Pa.) commit said. “I was way to amped up. I said, ‘let’s take it back.’”

“Then I made the next one.”

That next free throw meant 21 points for Dodds on the night, and 1,000 for his career. Dodds led his team in scoring on the night, as the Eagles soared to a 76-38 victory over Hershey, their first state playoff victory since 1985, when they won the state championship.

“Feels amazing, really does,” Dodds said. “Loss of words right now. Very thankful, very proud of my team and how we played today.”

Dodds started off his scoring in the opening minutes, drawing two and-1’s in the first quarter. He then scored six in the third quarter, and capped off the fourth with six more to reach the milestone.

As a team, Bishop Shanahan shot 66 percent from the field on Friday. Almost a polar opposite shooting performance than the one it put on in the District One championship game at Temple University last weekend, when the Eagles lost to Penncrest.

“At Temple we had a rough shooting day,” said senior Tom Ford, a Hofstra lacrosse commit who scored 14 points, “and that will happen to every team. But tonight we got back to ourselves and started making shots. We were comfortable and confident.”

Junior Phil Chenard scored 11 points off the bench for the Eagles, and only missed one shot from the field. His classmate Joe O’Malley added seven, and Danny DiBeneditto chipped in eight.

“We had that situation where nobody was on, and then tonight we had decent contributions from everyone,” Doyle said. “We share the ball so well and with the motivation to help Kevin out and for the seniors to drag this out one more week.”

Maybe it was the gym? The game was hosted at a neutral site, which happened to be Downingtown West, only 2.5 miles, or a 10-minute bus ride, from Shanahan.

The Eagles had played in the gym three times previously this year. Once against the Whippets, and twice for the Ches-Mont league semi final and championship game.

“We figured we would be in District One because we were the higher seed, but we didn’t think we would be this close,” Doyle said. “Fourth game in here, and we’re 4-0. Seventh game in last two years, two years of Ches-Mont. Fortunate to have a place across town like a home court.”

Hershey traveled east last year for its first round game in the state tournament, and defeated Penncrest, the District One champ. The Trojans returned multiple players from that team, but had no such luck pulling off the upset two years in a row.

Shanahan lost to Martin Luther King last year in the first round at a game in Philadelphia, and also returned the majority of its rotation. But on Friday night, Shanahan looked much more experienced.

“They won a state game and had two, and they had five guys that made significant contributions in that game coming back, so we felt that it was similar,” Doyle said. “We had a similar amount of guys returning, they just had an extra round in states. They knew what it felt like to get that win.”

Shanahan will face Milton Hershey in the second round on Tuesday, who won District 3, and defeated West Chester Rustin on Friday night. Location and date are still to be determined.

As for the marvelous shooting display put on by the Eagles, Dodds knows his team is capable of that feat, but also knows about the dismal performances.

“We do shoot that well sometimes,” Dodds said. “We know about these great nights, but we also know about the bad nights like Penncrest. So we want to learn from these games and learn from our mistakes. Still have faith in my team no matter what.”