District 1 6A: P-W, Abington set to square off in championship 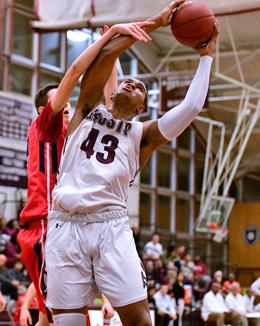 Eric Dixon (above) and Abington have to defend their District 1 6A championship against SOL champ Plymouth-Whitemarsh. (Photo: Mark Jordan/CoBL)

You couldn’t ask for a better matchup in the District 1 6A Championship.

On one side is Plymouth Whitemarsh, the 27-0, No. 1 seed attempting to continue a perfect season with its second tournament championship of the year.

Following a 68-46 victory over Central Bucks West in the semifinal on Tuesday night at the Liacouras Center, the Suburban One League title-winning Colonials are eyeing for their second district crown in three years.

On the other side is the No. 2 seed, defending district champions Abington. The Galloping Ghosts are coming off a 72-61 semi-final victory over Lower Merion; a victory on Saturday evening would be the Galloping Ghosts’ third district title in four years.

And the two teams met last year in the district semis where Abington came away with a 71-67 victory. It’s an unusual situation when the undefeated top seed has revenge on its mind in the championship.

The two Suburban One League rivals are very familiar with each other. But neither think that Saturday’s title game, a 6 PM tip at Temple University’s Liacouras Center, will be same matchup we’ve seen before.

“You can talk about Abington last year and us three years ago, it doesn’t matter, we’re two entirely different teams now with different mindsets and different levels of experience now,” Plymouth Whitemarsh coach Jim Donofrio said. “I think our personnel is a little bit different this year, theirs is a touch different, and so we will see how it goes. You’re talking about the game, as far as District 1 goes, that everyone wanted to see.”

Yet, when you look at the rosters, it’s fair to say a lot has stayed the same since last year’s clash, only making for another fantastic battle.

Dixon, who averages a team-best 23.8 points per game, dropped 22 on Tuesday night and was a force in the paint. He has experience on the big stage, compiling a key 11 points and 13 rebounds in Abington’s 57-51 win over Coatesville in the District 1 6A title game last season.

McLeod used his height especially well Tuesday, finishing with six rebounds, three of which contributed to the Colonials’ 15 total offensive boards. He added 21 points as part of a dominant night. McLeod said he is looking forward to the matchup with a friendly rival.

“It’s going to be a crazy battle,” McLeod said. “We talk a lot. We talk about colleges we like and other things, and we knew we were going to play each other Saturday. And No. 1 vs. No. 2 is going to be crazy.”

Robbie Heath, who dropped 30 points last year in both the semifinal against PW and the district title game, still leads the way at the point for the Ghosts. The 6-2 senior guard is a tremendous shooter and ball handler who led his team with 24 points Tuesday night.

Heath is complemented by 6-5 junior Lucas Monroe who, despite his size, spends most of the time scoring from the backcourt. Monroe is averaging 13.8 points per game while Heath has 17.8 ppg.

Abington coach Charles Grasty said the key to finding offensive success will be his team’s ability to stay patient against a tough Colonial defense.

“We know they like to run up tempo, they like to press, we just have to be patient and we can’t get caught up into breaking the press and trying to get quick shots,” Grasty said. “I know Robbie, he likes to get going. And if he gets going, he’s a handful to stop so we will look to see if they have any holes in what they run and if the transition is there then we’ll take it.”

The Colonials are led in their backcourt with a trio of experienced senior shooters.

A welcome addition for Plymouth Whitemarsh in this rematch is Ahmin Williams, Ahmad’s twin brother who plays a twin-like style of play from the backcourt. Ahmin, who had 10 points and seven rebounds on Tuesday night, sat out of the playoffs with an injury last season. The Colonials are thrilled to have him this time around.

There will be an incredible amount of anticipation leading to Saturday night’s tip. And deservedly so. A district title, a perfect record, a premier seeding in the state bracket and bragging rights in a District-1 rivalry that mirrors the Cavaliers and Warriors are all on the line.

For Donofrio, he hopes his guys can stay grounded and focus on the challenge they will face.

“Our confidence is through the roof and there’s no reason for it not to be,” Donofrio said. “And at this time of year as a coach, you try to leave the emotional stuff to the players. But they've had our number for the last two or three years now so until we can play better against them, they’re to be highly respected without a doubt. And it’s our job to figure them out.”

But the defending champs plan to have fun on the big stage and savor this exciting time.

“I tell the guys all the time enjoy this game, enjoy this moment, I’d much rather play than coach it,” Grasty said. “We get down there, we look around, soak it up, take pictures, videos and enjoy it. It’s high school. It’s supposed to be fun and no pressure and that’s the way you go down and approach it.”