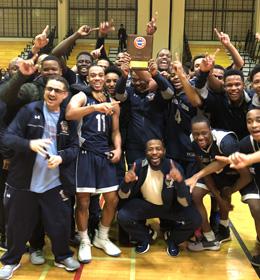 When he went to sleep on Wednesday night, Math, Civics & Sciences sophomore forward Tvon Jones dreamt about the Mighty Elephants knocking down a buzzer beater to win the District 12 Class AA championship.

On Thursday night against Constitution, it happened just as he’d imagined. Kind of.

With 2.6 seconds left on the clock, the Mighty Elephants went the length of the court. Mohammed Semega found Semaj Mills open on the left wing. As a defender tried to close down on him, Mills buried a 3-pointer with no time left on the clock to give MCS a 69-66 win.

“To be honest with you, last night I had a dream about this,” Jones said. “I lie to you not. It was me though, but I’m glad it’s him.”

“I’m just happy to make the shot,” said Mills, who was tackled by his teammates after the shot went in.

Quite a lot happened in the final seconds of Thursday’s contest. First, Constitution ran the clock down with less than a minute left, attempting to get the final shot of regulation. The attempt was no good and a foul on Constitution on the rebound scramble for the rebound gave MCS the ball back with four seconds left.

With the ball underneath its own basket and the score tied, MCS called timeout and set up what it thought would be the final play of regulation. Instead, Constitution forced a five-second count, and had a chance to inbound the ball in the front cout with an opportunity to win the game.

The Mighty Elephants locked down, forcing a jump ball with 2.6 seconds left on the clock. With no timeouts, Mills said they tried to rekindle the play they first drew up.

Mills started near half court, and when he saw Semega about to catch the ball, he backpedaled toward the three-point line in case there was time left for one more pass. Semega took a dribble and fired the ball up to Mills.

“I actually didn’t think he was going to pass it,” said Mills, who finished with 17 points. “I thought he was going to shoot it from half court, but it felt good off my hands, and it was just like, ‘Wow. We won.’ I can’t even explain it.”

Led by 14 first half points from Damon Wall, Constitution held a two-point lead at halftime. MCS grabbed a 51-43 advantage after three quarters by forcing five turnovers early in the second.

Wall, who finished with 21 points, eight assists and eight rebounds, helped the Generals climb back into the game in the fourth. A Jabari Merritt block, followed by a Merritt three temporarily gave Constitution the lead back with 1:49 left in the game before MCS senior guard Kwahzere Ransom, who finished with 15 points in the game, knocked down a pair of free throws to tie the game.

Heading into Thursday’s game, the Mighty Elephants had lost three straight to Constitution, including a 20-point loss on Jan. 9 and and a 12-point loss on Jan. 25. Mills was able to break the streak with his buzzer-beating three.

“That was the best part, just beating them,” Mills said. “It didn’t matter what kind of game it was, what we were receiving at the end.”

Both teams will play in the PIAA Class 2A tournament. Though MCS won the district title a year ago as well, Constitution defeated the Mighty Elephants in the state semifinals before falling to Sewickley Academy in the championship game.

Getting a win against their rivals gives MCS some confidence heading into the next round of the postseason.

“Just to beat them going into states meant a lot,” MCS coach Dan Jackson said. “It’s been a rough season, a lot of ups and downs. To come out here and get a win tonight just signifies we got a chance to make a run in the state playoffs.” 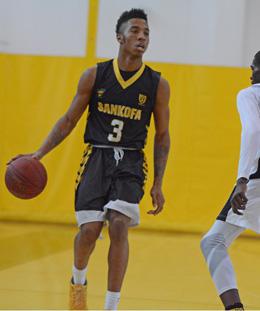 Khalil Turner (above) and Sankofa successfully defended their District 12 1A crown on Thursday. (Photo: Josh Verlin/CoBL)

Turner returns in second half to push Sankofa past Eastern

Khalil Turner sat on the bench with two fouls at the end of the first half watching his team’s once 13-point lead fade away.

After the 6-foot-6 point-forward fouled out in the team’s Public League quarterfinal against Mastery North a week earlier, Sankofa head coach Isaiah Thomas wasn’t going to risk the same thing would happen again.

“For me sitting on the bench with two fouls at the end of the first half, that was kind of tough because that’s when they went on a big run,” Turners said.

Eastern took a two-point lead at halftime after Darnell Ransom drilled a three before the break, and built the advantage up to 10 in the early parts of the second half.

However, Turner’s return steadied the ship for Sankofa as it tried to defend its District 12 Class A title.

Turner finished with 14 points and 17 rebounds, scoring 12 points in the second half, as the Warriors climbed back to beat Eastern,73-64, and clinch a PIAA Class A playoff berth.

“I had to make a mark in the second half,” Turner said.

After Sankofa built a 30-17 lead with about three minutes left in the second quarter, Eastern closed the half on a 14-1 run. Then came a 13-0 start to the third quarter. Sankofa turned the ball over nine times during the 27-1 spurt.

In order to get back into the game, the Warriors flipped the script. Demetri Glover-Reed turned a steal into a fastbreak. Moments later Turner did the same thing. After a few more Eastern turnovers, Sankofa was within two by the end of the third quarter.

The Eagles scored the first basket of the fourth, but the Warriors followed with 11 in a row to get back a lead they would not relinquish again.

Sankofa got 22 points from junior Scott Spann, while Ransom led Eastern with 20 points.

The Warriors will play the second seed from District 1 in their first state playoff game. They won one game last season before being eliminated by Faith Christian.

“We return almost our whole team from last year’s state tournament, so these guys have some experience playing in the state tournament, they know what to expect,” Thomas said. “We believe when we play good basketball, the sky’s the limit.”