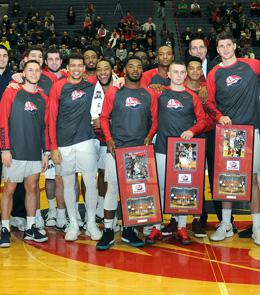 Shippensburg's senior class (above) closed out its final regular season with an 85-74 win over Bloomsburg. (Photo courtesy Shippensburg Athletics)

SHIPPENSBURG — When Chris Fite sat down with Justin McCarthur and Dustin Sleva in their Pennsylvania homes — one in suburban Harrisburg and the other in suburban Pittsburgh — both youngsters weren’t concerned about what had gone on before at Shippensburg University.

They just wanted to play college basketball and Fite, who was enduring a tough go in his first season as head coach, was willing to give them and several others the chance to continue their careers.

That was some four years ago.

“I felt like if I came in here and hustled and recruited the right type of kids, that we could put together a competitive team and build a program,” said the 6-9 Fite, who grew up in Latrobe.

“You have aspirations as a first-time coach and you want to aim high, but I don’t know if I ever believed that we’d win a championship in the first four years. I knew that we could get a certain type of kid in here that we could be competitive and relevant again. The guys have exceeded all my expectations.”

While the numbers will back up Fite’s remarks, let’s first fast forward to Saturday afternoon at Ship’s Heiges Field House, where the appreciative gathering on hand offered a collective thank you to McCarthur, Sleva and classmate Clay Conner during the Senior Day festivities that preceded the Red Raiders’ regular-season finale against Bloomsburg.

Those in the bleachers, whether family, friends, fellow students or curious hoops fans that live in and around the bustling burg that sits just off Interstate 81, were still juiced several hours later after the Red Raiders polished off their Pennsylvania State Athletic Conference East Division playmates.

And while Saturday’s 85-74 victory closed out yet another sparkling regular season — McCarthur tossed in 23 points, Sleva checked in with 19, Conner bucketed 18 and soph John Castello banked 10 and 10 boards — those who’ve been at SU (21-6) for a while want more.

In fact, they really crave a second straight PSAC title.

“I really bought into what Coach Fite was saying,” said the 6-8, 230-pound Sleva. “He played like me. With the guys who were here and the guys who were coming in, I thought we could build something. I kind of foresaw it, but I didn’t think we’d be this good. But we all kind of clicked at the right time.”

“[An opportunity] was pretty much all I wanted out of the recruiting process,” added McCarthur, the bullet-bodied 6-0, 210-pounder. “I didn’t care about the record going into it.

“My freshman year, I wasn’t expecting to start. I just wanted to contribute any way that I could. I was able to start and it just took off from there. I was grateful for the opportunity.”

They’ve mixed the cinder blocks and mortar, creating a basketball foundation at a school that had enjoyed sporadic success prior to Fite’s arrival prior to the 2013-14 campaign following a lengthy run as an assistant coach at perennial PSAC West Division hammer Indiana (Pa.).

Fite, who played professional basketball in Europe for 11 seasons following a sensational playing career at the University of Rochester, sensed an opportunity awaited him at SU.

Castello, Kellem and Daylon Carter (Ambridge) were all-state selections within their respective high school programs, so Fite and his staff have been busy mining quality lodes of talent.

“He’s the most unselfish player I’ve ever played with,” Sleva said of Castello, a 6-5 sophomore forward. “He doesn’t care about points. He cares about rebounds.”

Nonetheless, everything has blossomed in a relatively short time.

And that’s the surprising thing that’s been so satisfying to everyone involved in the SU build, going from 3-23 in Fite’s first season to winning 68 games the past three years — including a PSAC crown last season before playing in the NCAA Division II playoffs.

“They weren’t buying into the winning tradition,” Fite stated, recalling his first full recruiting class. “They kind of saw the opportunity, they appreciated the vision I had for the program and them, and they were excited to come and play a big role as freshmen and help us turn it around.

“You look at the three guys that are graduating and they’ve been amazing.”

“That buildup was huge for us,” Sleva admitted. “It’s what I envisioned. I thought we’d get better as the years went on, but I didn’t expect it to be [like this]. I just remember the PSAC championship my freshman year was like the farthest thing possible and I didn’t think we were ever going to get there.”

As for those really neat things:

While Saturday’s success delivered victory No. 21 — the Red Raiders finished league play with a 17-5 mark — it’s the third season in a row Ship has chalked up 20 or more wins. Only twice before had SU pocketed 20 or more dubs, but never in successive seasons.

On Monday night, when Millersville checks in to play Fite’s confident Red Raiders, Shippensburg will begin defense of the PSAC crown it collared a season ago — just the second in school history.

Shippensburg added to its special 2016-17 season after hoisting the PSAC title — the Red Raiders wound up 27-4 — by claiming its first NCAA Division II tournament win.

Sleva will conclude his career as the program’s all-time leading scorer — his 19-point burst Saturday raised his career total to 1,941 points. He also has 1,078 rebounds, making the Montour High graduate just the second player in SU history to amass 1,000-plus points and 1,000-plus boards.

Sleva also is the only player in SU history to land a first-team All-America nod.

McCarthur, who sits sixth on SU’s all-time with 1,542 career points, set the PSAC’s single-game standard for three-point percentage (1.000) last month by bagging nine of nine treys against East Stroudsburg. The Bishop McDevitt grad’s 271 3-balls are the most in Red Raiders history.

SU staffers, in fact, were trying to determine whether McCarthur’s performance at the foul line in Saturday’s victory (15-for-15) was some sort of single-game mark. Turns out McCarthur’s efficient work at the stripe was a record, surpassing the previous best of 12-for-12.

Heading into Saturday’s scrap, Shippensburg ranked fourth in Division II in free-throw percentage (79.3), a number that might climb since the Red Raiders canned 25 of their 29 looks.

SU has won its last 18 games at Heiges and is 41-3 over the past three seasons at home.

“As a staff, I think we’re excited about where the program’s at and the possibilities moving forward,” Fite said. “We’ve raised the bar, so there’s a different expectation now. Sometimes you come into the gym and you’ve dropped a couple games and people are looking at you like what’s wrong with the team. We’ve got 21 wins, the league’s very good and don’t forget where we were a few years ago.

“It’s like appreciate what we’ve got right now. I’d like to believe that I’m a decent coach, but I’ve got great kids, too. We’ve recruited the right type of guy and we’ve brought some guys in that have, like I said, exceeded our expectations. When you’re able to put together a roster like that and you end up with a Sleva and a McCarthur, all of a sudden you can make some noise.”

Lots of it, too — and at a really high decibel level.

“We’re kind of on a bubble right now with the playoffs,” Sleva said. “We’re in, but we’re not totally in. We’ve got to keep playing, but we can’t worry about that. I think we put a little too much pressure on us and we lost a couple more games than we did last year, but that happens. It’s basketball.

“We’re taking it one game at a time, but we’re looking to make one more run.”

While Fite’s Red Raiders have accomplished plenty, they’ve done so by playing an entertaining brand of fast-paced basketball featuring crisp ball movement, transition play, unselfishness and shots going up from everyone who just happens to be on the floor at any given time.

SU also plays some terrific man-to-man defense with help concepts built in, along with plenty of communication between teammates. That was something Fite brought with him from IUP.

“We preach that on a daily basis just about,” Fite said. “Being vocal and communicating and playing with energy and sharing the ball. Sharing the ball is something we write on the board before every game and our guys really buy into that. They’re willing to make plays for one another and pass up a shot for a great shot — and we’ve got guys that can knock it down at the other end.”

“We always have five guys on the court that can make shots and that makes us difficult to guard.”

Fite also brought along his blueprint for constructing a consistent basketball program that can contend annually for PSAC supremacy — and hopefully make an impact regionally and nationally.

“We take pride in just getting wins,” McCarthur stated.

That said, since six PSAC programs appeared in the latest set of regional rankings, life in the 18-school circuit is hard-core competitive. SU, in fact, was No. 3 regionally.

And Shippensburg, with a rock-solid foundation in place and talent up and down the bench, now finds itself sitting among the top PSAC programs and not alongside those at the bottom.

Fite knows what it’s like when things aren’t going well, since his first SU squad finished 3-23.

Yet those numbers didn’t scare off players such as McCarthur or Sleva — or those who’ve since followed them to Shippensburg. While the departing seniors did their part to construct a legacy, they just want to see the program continue to grow stronger and stronger as they look on proudly.

“Coming here, I wanted to leave a legacy,” McCarthur added. “I think I’ve done that in these four years and I think our senior class has left an example for the next group of guys.”