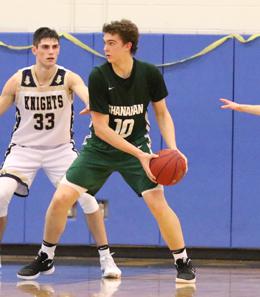 A Bishop Shanahan-Rustin matchup is one of four District 1 5A quarterfinals. (Photo: Josh Verlin/CoBL)

The District 1 class 5A field is down to eight teams, all of whom have at least three games left on their schedules -- and all but one of which will play in the PIAA 5A tournament two weeks from now.

With seven bids coming out of the district, that means the four winners of Saturday’s games not only will be playing in the semifinals at Temple University’s Liacouras Center next Wednesday, but will guarantee themselves a spot in the state bracket. The other four teams will be alive in the play-back bracket, where the only team that won’t make states is the one that loses its final three games.

Here’s a look at each of the four quarterfinals (which all tip at 7 PM, aside from the Shanahan/Rustin game at 1 PM):

1) Penncrest vs. 9) Holy Ghost Prep
The defending District 1 5A champion -- the only District 1 5A champion, considering the state only moved to six classifications last season -- is just as hot this year, and perhaps even more talented. It starts with senior guard Tyler Norwood, the 5-10 dynamo, but he’s gotten more help than expected, with all five of the Lions’ starters playing key roles and major minutes for a squad that’s currently sitting at 22-3 on the season, the only losses coming to Lower Merion (twice) and Upper Darby.

But Holy Ghost Prep (15-10), which has picked up 10 of its wins in its last 16 games following a slow start, is playing with confidence after knocking off Chichester 50-45 on the road in the opening round. Tony Chapman has won more than 800 games in his career at Holy Ghost for a reason -- he gets the most out of his talent, and his Firebirds are rarely out of a game. That’s how they’ve managed to pull off wins over BAL schools like Church Farm and Valley Forge, both of whom boast near seven-footers in the middle, with nobody in the roster taller than 6-5 juniors Sean Sylvester and Greg Calvin. That junior class, which goes 10 deep, leads the way, accounting for 39 of those 50 points, including 11 each from Calvin, Sylvester and Jack Rittenmeyer, plus eight from sophomore Sean Elliott.

Penncrest’s scoring isn’t typically quite as balanced, with Norwood scoring 20 of his team’s 53 in a 26-point win over Upper Moreland in the first round. But unlike in the preseason, when head coach Mike Doyle joked that the defending Central League Player of the Year would need to score close to all of his team’s points, these Lions have shown they have some nice secondary options. Junior forwards Matt Arbogast and Malcolm Williams have gone for numerous double-digit scoring outings of late, and they also reliably get a few buckets per game from defensive standouts Justin Heidig and Chris Mills, both seniors.

Great Valley defeated Pottsgrove in the first round, and with a win over Wissahickon, the Patriots would go to Temple for the second year in a row. The Patriots have gained back Nate Graeff, their starting power forward and go-to scorer in the post. Graeff had missed the previous few games while in concussion protocol. The senior duo of Liam Ward and Matt Porreca, which will be continued at Guilford College (N.C.) next fall, has been phenomenal this year. Porreca does the job of bringing the ball up and running the offense, while Ward can score off the bounce and can step out beyond the arc and make the open shot. Before losing to Coatesville in overtime in the Ches-Mont final four, Great Valley won seven of its last eight games.

Wissahickon lost in this round a year ago to eventual champion Penncrest, but the Trojans hope to change that this year. Max Rappaport, a 6-2 senior, is scoring upwards of 16 points a game for the Trojans, and junior Eddie Fortescue at about 15. Wissahickon beat Strath Haven by 19 in the first round, thanks to 17 points by 6-4 senior Zach Reiner. Back when Villanova star Mikal Bridges was playing for Great Valley, Wissahickon upset the Patriots in the first round of the district tournament. If the Trojans win on Saturday, it wouldn’t be as big of an upset; this should be the closest matchup of the quarterfinal round.

Even though they are only 3.7 miles away from each other in Delaware County, Chester and Sun Valley are not in the same conference. About a decade ago, Sun Valley left the Del-Val for the Ches-Mont. Sun Valley is hoping to make it to the state tournament for the first time since 1995 with a win, while Chester has won nine state championships in school history. Sun Valley is led by a junior-heavy lineup, featuring Vinny D’Angelo, a 6-2 sharpshooter, and Marvin Freeman, an athletic 6-4 wing. Expect Lance Stone and Isaac Keenan, also juniors, to chip in and contribute for the Vanguards.

Winning a game in the Clip Joint, arguably the toughest venue to play at in District One, is a very difficult thing to do. Besides the chaotic crowd, the Clippers boast one of the most athletic teams in the area. Senior Brian Randolph III is one of the tallest players on the roster at 6-4, but the lack of height is made up for by quick guard play. Junior Michael Smith, a true point guard with a tight handle, and classmate Rahmaad DeJarnette both scored 12 points in a first round win over Academy Park.

2. Bishop Shanahan vs. 7) West Chester Rustin
A semifinalist in this tournament a year ago, Shanahan has four of its top six back from that squad, and the Eagles (20-4) are absolutely rolling at the right time of the year. Ken Doyle’s squad had some bumps and bruises earlier in the month that caused a couple of losses, but now they’re fully healthy and back to playing at a high level, as evidenced by a win over Coatesville in the Ches-Mont championship game for the league’s first title in that conference; now, they’re hoping to make it consecutive years in the state bracket, where they lost to Martin Luther King in the first round a year ago.

Rustin (15-9) is plenty familiar with how good Shanahan is at full strength, considering the Knights fell victim to the Eagles 56-41 in the Ches-Mont semifinals in their only meeting this season. Junior forward Jake Nelson was held scoreless in the second half of that matchup, a big reason Shanahan was able to run away from a three-point halftime advantage; Rustin needs the 6-6 big man to put up a big number to stay in this one. Keith Cochran’s squad also relies heavily on senior sharpshooter Bryce Barrouk to make shots, and junior wing Taj Asparagus is a versatile presence who comes off the bench despite being one of his team’s most productive players.

All five Shanahan starters are legitimate offensive weapons in their own right. Kevin Dodds, a 6-6 senior forward bounded for D-II Gannon (Pa.) is a tough post cover who rebounds well on both ends and can step out to 15 feet; Tom Ford, a 6-4 forward, is an inside-out threat who will play lacrosse at the next level; senior guard David Angelo is a 5-10 point guard who can dish and shoot 3s, and junior Joe O’Malley is a rapidly-developing scoring threat who can create off the bounce as well. Rustin has to shut down at least two or three of those options to come away with the win, no easy task.