District 1 5A First Round Preview 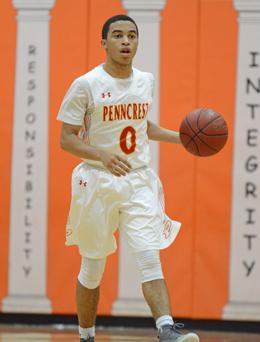 The second-ever year of the District 1 5A bracket brings back many of the same contenders from a year ago, including defending champion Penncrest and fellow semifinalists Great Valley and Bishop Shanahan are all back in the top five, with several other strong programs right there in the mix.

Seven of these 16 will advance to the PIAA Class 5A tournament, meaning first-round losers are done for the year but the winners guarantee themselves at least three games; only a quarterfinal win guarantees a spot, but three of the four losers in the next round will end up safe as well.

Here’s a look at the eight games (all played Wed., Feb. 21 at 7 PM unless otherwise noted):

1) Penncrest vs. 16) Upper Moreland
Tues., Feb. 20, 7 PM
Penncrest (20-2), runner-up in the Central League, were scheduled to play Springfield (Delco.) in the first round of districts, but the Cougars opted not to play in the postseason. That means Upper Moreland is next in line to try and take down the top overall seed and Central league runner-ups. Senior Tyler Norwood has been terrific all year for Penncrest, as have Matt Arbogast and Chris Mills, but Mike Doyle gets the most out of his top seven. For Upper Moreland (9-13), senior guard Ryan Coyle will try and slow down Norwood, and hope to score some of his own and try to pull off what would be the biggest upset of the tournament.

8) Chichester vs. 9) Holy Ghost
Chichester lost ot Chester in the Del-Val league championship last week, but still finished the year with a record of 14-8, and lost its last two games. Senior DaQuan Granberry, who is capable of going for 25 points on any given day, is the go-to scoring threat for the Eagles. James Hendricks and Amari Stewart both averages double figures for Chichester. Holy Ghost won its last five games until losing to Christopher Dock last week in the Bicentennial playoffs. The Firebirds (13-9) are led by cousins Sean and Greg Sylvester, a pair of juniors who do the majority of the scoring. Junior Greg Calvin and senior Jack Elliott round out the scoring rotation. 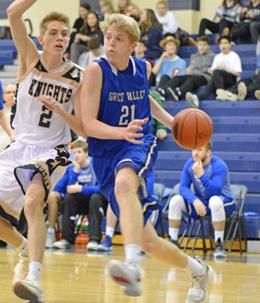 5) Great Valley vs. 12) Pottsgrove
Even though they’re in different conferences, Great Valley and Pottsgrove (12-10) faced off earlier this year, with Pottsgrove winning 70-65. Great Valley went on to win the Ches-Mont American division, and Pottsgrove didn’t qualify for the PAC final-six, due to point criteria in a tiebreaker scenario. Grove’s Manny Clark, a 5-11 junior, has been phenomenal for the Falcons as of late, scoring 20+ on numerous occasions last this season. Seniors Liam Ward and Matt Porreca have led the charge this year for the Patriots (16-6), who run a patient offense under the guidance of Paul Girone; if GV’s 3-pointers are falling, they’re tough to disrupt.

4) Wissahickon vs. 13) Strath Haven
Finishing in second place of the SOL’s American division, Wissahickon is led by senior Zach Reiner and Max Rapoport, two super-versatile guards who can fill up the stat sheet. The Trojans (16-6) have won their last five after losing to both Plymouth-Whitemarsh and Central Bucks East a few weeks back. Strath Haven and first year head coach Dan Spangler enter districts with a record of 10-12, and placed in the middle of the pack in the Central league. Senior forward Cooper Driscoll and classmate Ryan Morris both average double figure scoring.

3) Chester vs. 14) Academy Park
Chester (16-6) started the season with a record of 1-5, but have gone 15-1 since. Winners of the Del-Val conference, the Clippers are led by junior lead guard Michael Smith, a 6-foot floor general who averages double figure scoring. Brian Randolph III is having a solid senior year for Keith Taylor’s bunch. Chester won both the matchups between the two teams this year, by margins of 17 and 37. For the Knights (8-14), senior Nasiem Harley and sophomore Kamrohn Roundtree both average 12 points per contest.

6) Sun Valley vs. 11) Marple Newtown
When Sun Valley and Marple Newtown faced off earlier this year back on January 13, Sun Valley won 59-42. The Vanguards (16-6) were led by junior sharpshooter Vinny D’Angelo (20 points), and junior wing Marvin Freeman (12 points). Michael May was held to eight points that game, but is the go-to scoring option for the Tigers (13-9), who lost to Penncrest in the final-four of the Central League. Prior to the loss to Penncrest, Marple had won its last seven games.

7) West Chester Rustin vs. 10) Upper Perkiomen
Tues., Feb. 20, 6 PM
Upper Perk qualified for its first PAC postseason berth in over a decade, and are hoping to go further in districts this year. Last season, the Indians lost to Great Valley in the first round. Seniors Ryan Kendra, a D-III York College commit, and Liam Boyle, who scored 47 points in the last regular season game, do most of the damage for the Indians (15-7). For Rustin (14-8), which lost in the Ches-Mont final four to Shanahan, junior big men Jake Nelson and Tajir Asparagus are averaging double figures.

2) Bishop Shanahan vs. 15) West Chester East
Champions of the Ches-Mont conference, Bishop Shanahan (17-4) lost only two league games all year. One came to runner-up Coatesville, and the other to their first round district opponent on Feb. 6. The senior trio of Kevin Dodds, Tom Ford, and David Angelo have been huge all year for the Eagles. Besides beating Shanahan, WC East only won two other games in league play, but almost beat Coatesville in the final week of the conference. The Vikings finished with a record of 9-13, and were the second-to-last team to qualify for the district tournament. Tym Richardson and Andrew Carr both score over 10 points a game for East.