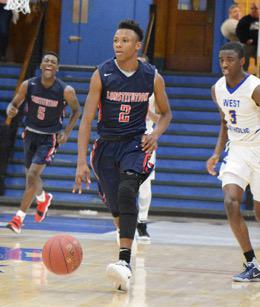 Keshaun Hammonds doesn’t usually wear an arm sleeve, but he tried something different for Friday night’s game against Lincoln.

The Constitution sophomore guard walked onto the court with a black sleeve on his left forearm before the Public League quarterfinal matchup and something felt right.

“It was in the sleeve, the arm sleeve I had,” Hammonds said. “I felt it tonight. I was on.”

Hammonds had the hot hand from the start, knocking down four 3-point shots and finishing with a career-high 26 points in the Generals’ 89-77 win against the Rail Splitters on Friday night at Martin Luther King High School.

The second-year starter, who was celebrating his 17th birthday, had a trip to the Public League semifinals on his mind.

Constitution’s defense got it out to an early lead. Hammonds had nine points and three steals in the first quarter as the Generals went up 24-17.

They continued to scrap in the second quarter, finishing with 10 steals in the first half to go up by as many as 23 points before a 9-0 run by Lincoln made it a 48-34 game at halftime.

Hammonds scored 12 points in the first half, but senior guard Damon Wall was Constitution’s offensive leader with 18 points.

Wall didn’t score after halftime as he sat most the second half on the bench after fouling out, so Hammonds and fellow guard Jahmir Marable-Williams sparked the offense in his place.

Marable-Williams did a little bit of everything for Constitution. He finished the game with 15 points, six assists and six rebounds to go along with three steals. Hammonds scored eight of the team’s 17 points in the third quarter to put Constitution in firm control, up 65-49.

“It was very important for me to step up because one of our senior guards Damon Wall got fouled out,” Hammonds said. “I had to step up. Me and the other guards had to step up and hold it down and get the win.”

The two teams combined for 62 fouls on Friday night, which forced the game to go nearly two hours long. By the fourth quarter both squads looked gassed.

Lincoln cut Constitution’s lead to single digits within the first three minutes of the fourth quarter. Rail Splitters’ senior wing Shikier Morrison tried his best to will his team back into the game, scoring 13 of his 23 points in the fourth quarter.

However, Constiution senior forward Jabari Merrit, who had eight of his 15 points in the fourth quarter, helped the Generals keep Lincoln from ever closing the gap.

“It was a slow game,” Merrit said. “It was probably the longest game we played all season…It was intense. It was a physical game, but we played through it well.”

If it weren’t for the uniforms and referees, one might have walked into the gym at Samuel Fels High School on Friday afternoon and mistaken the game going on for a pick-up contest.

After an altercation during the last time they met, Martin Luther King and Math, Civics & Sciences played a game with no fans.

Cougars’ senior center Will McNair said he usually feeds off the crowd and found it difficult to get fired up to start. Fellow senior Jerry Andrews-Fulton said the empty gym made things easier when he was at the free throw line in the fourth quarter.

Even if the bleachers were out and full, there wouldn’t have been too many shouts from the stands as King cruised to a 63-48 win, leading by double-digits from the early parts of the second quarter on.

This was the third time the teams met up this season, and it started out similarly to the first two. King built up a big lead early, taking a 16-7 advantage into the second quarter and going up 32-12 by halftime.

In the previous two meetings, the Cougars let MCS creep back into the ball game due to turnovers. While King did get a little sloppy with the ball in the second half, the Cougars never let MCS get within 11 points.

Andrews-Fulton helped the cause by knocking down 7-of-8 free throws in the fourth quarter. He and Kenneth Wilson both had 13 points to lead King. Jihad Watson scored 15 points for MCS.

“I just wanted to go to the final four, help my team get the W,” Andrews-Fulton said. “I wasn’t really thinking about nothing else besides just making the shots.”

Colson arrived at Martin Luther King five years ago. The Cougars are now making their fifth straight appearance in the Public League semifinals, which included a championship in 2014. They lost to Imhotep in the championship last season.

The Cougars will face Constitution on Monday with a shot at back-to-back title game appearances on the line.

“That’s a good accomplishment, but we want to get to the championship and win,” Colson said. “We’re going to have to beat another good team next round.”

Imhotep holds on against Bartram

The reigning Public League champions didn’t have their best game, but they had enough to outlast Bartram in the first quarterfinal game at Martin Luther King High School on Friday night.

Without Donta Scott, who went down with an injury in the team’s previous game, Imhotep built up a 20-point advantage by the end of the third quarter and despite a late Bartram comeback effort, held on to win, 62-52.

“We didn’t play well,” Imhotep coach Andre Noble said. “We told them, that’s the way you go home if you don’t play well. We know we’re missing Donta, but we’ve been missing someone all season, so it’s not abnormal for us to play without one of our guys…so we expected to play better than we did today and we just didn’t.”

Jamil Riggins Jr. had 15 points and Bernard Lightsey had 14 points for Imhotep. After Bartram scored just 15 points in the first half, Donte Dupriest helped give the team a boost with all of his team-high 13 points coming in the game’s final two quarters.

Imhotep will play the winner of Sankofa Freedom Academy and Mastery North, which play at Ben Franklin High School on. While Noble expects Scott to be cleared soon, he will have his team prepared to play without him.

“We have to assume that he’s not,” Noble said. “We’re still a talented enough team that we can beat teams whether he’s cleared or not.”