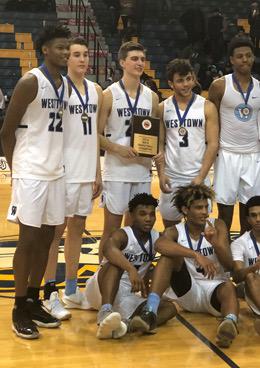 Owen McCue (@Owen_McCue)
--
When he was a sixth grader in 2012, Harrison Eichelberger sat in the stands and watched the Westtown School take home its first Friends Schools League title in 26 years.

That Westtown squad, led by former Villanova player Daniel Ochefu whose jersey now hangs on the wall in the school’s gym, was the start of something special.

In the last six years Eichelberger, now a senior on this year’s squad, has seen the small school in West Chester, Pa. turn into a national power. He’s played with guys like Brandon Randolph, now at Arizona, and Mohamed Bamba, now at Texas and a likely lottery selection in this year’s NBA draft.

Eichelberger, who is headed to play at Skidmore College next season, now shares the court with Duke commit Cam Reddish, another player likely headed for an early draft selection.

As Westtown took home its fifth consecutive FSL title and sixth in seven years with a 75-57 win against Shipley on Friday night at La Salle University, Eichelberger reflected on the unique experience he’s been a part of during his high school career.

“I’ve thought about it a couple times, especially now seeing Mo and Brandon doing crazy things in the NCAA, it’s pretty crazy,” Eichelberger said. “Thinking about Cam, in a year or two, he’s going to be in the NBA making a bunch of money. That’s crazy."

“It’s been a lot of fun,” he added. “Playing with future NBA stars, not everybody gets to do that.”

Reddish might be the best of the bunch. It’s unlikely a player of his caliber, currently ranked No. 3 in the country by ESPN and considered the top player by several others, will walk into the gym any time soon.

He put on a show on Friday night, scoring 34 points. Though Shipley, led by 23 points from senior guard Sam Sessoms, kept things close in the first half, Reddish shined in the third quarter, scoring 12 points to help Westtown enter the fourth with a 20-point lead.

His status has created constant exposure for this Westtown team. Senior forward Jake Forrester said kids come up to him asking for pictures after every game.

The significance of Reddish’s presence hasn’t been lost on Westtown coach Seth Berger, who can now turn on the television any given night of the week and find one of his players to watch. He said his current group is appreciative it’s a once in a lifetime experience as well.

“I don’t think you can be with Cam Reddish on a basketball court and not realize that you’re watching greatness,” Berger said. “He’s unbelievable to watch on the basketball court. There are some times when I really have nothing to add to what he does. He’s just amazing. So, I think everyone really appreciates when you’re playing with a kid like Cam like ‘Wow. This might be the best player I will ever have the opportunity to play with.’”

When Reddish leaves, there will likely be fewer cameras at every game. Most events won’t have to be played at college-sized venues like Friday night’s game.

However, the future is still bright for the Moose after this season. It would be no surprise if they make it six straight titles next year.

Junior guard Jalen Gaffney is a high-level recruit, already with offers from school like Florida. He scored 18 points on Friday. Sophomore Noah Collier, a 6-foot-8 forward, poured in 14 points and 11 rebounds. He put on a display for the crowd with several rim-shaking dunks.

Sophomore guards TJ Berger, the team’s starting point guard, and Seyon Kpaan, a key contributor off the bench, will also be back next year. Reddish’s younger brother, Aaron Reddish, is a 6-4 freshman with a still-rising ceiling of his own.

That will all matter at some point down the road. For now, Westtown’s head coach is content with celebrating another league title.

“Every team is unique and every year is its own adventure,” Berger said. “Winning the Friends League championship 2018 had nothing to do with any of the year’s prior or any of the years in the future.”

"Tonight, I'm just thinking about the Friends League championship,” he added. “I'm really happy we won it. It's a special championship against a really good team, and I'm going to enjoy the chip and the weekend."