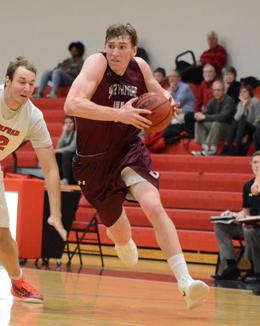 Robbie Walsh (above) and Swarthmore are in a battle with several other programs to repeat as Centennial champions. (Photo: Josh Verlin/CoBL)

Within the next two weeks, the Division III regular season will come to a close, but conference tournaments are anything but decided.

Races for the top seed have home-court advantage and byes at stake, while other teams are looking for a late-season push to sneak into the playoff picture.

Keeping that in mind, we take a look at the postseason picture for four local conferences:

Update: Muhlenberg’s Jan. 31 upset of defending champs Swarthmore really shook up the top of the standings. F&M is now in place to earn the top seed for the conference tournament thanks to its win over the Garnet earlier in the year, and the Diplomats have strung together five straight victories behind the program’s all-time leading scorer, senior Brandon Federici (21.1 ppg this season). Johns Hopkins, meanwhile, is riding seven straight wins into matchups with F&M and Swarthmore, both sure to be good games and both with a lot of meaning for playoff seeding. The Blue Jays are only one game back from the top spot and have already locked up a spot in the tournament; if they don’t manage to break open the race with a win in either of their next two games, however, the top seed will come down to a season-ending clash between F&M and Swarthmore on Feb. 17, the Garnet holding home court in that one.

With the victory over Swarthmore, Muhlenberg also revived its own shot at the conference tournament. The Mules are a game behind Dickinson but lose the tiebreaker of overall record, so they must make up two games in the standings over their final four regular season contests, a doable feat but also a very difficult one -- their schedule will help, as they won’t have to play any of the top three teams in the conference to finish the regular season. Ursinus has an outside shot to sneak into the top 3 and avoid playing an extra tournament game (the 4-5 matchup), but with games against Swarthmore, Dickinson, and Muhlenberg coming up, that is also unlikely. 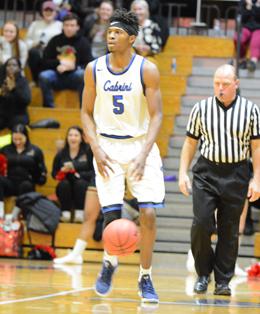 Tyheim Monroe (above) and Cabrini are the favorites in the CSAC, but not by much. (Photo: Josh Verlin/CoBL)

Update: Cabrini took over the standings with a 92-88 win over Gwynedd Mercy on Jan. 31, and having now split series with both the Griffins and Neumann, faces the middle of the conference to close out the year; Keystone, Rosemont, and Immaculata could all swing upsets with their own races heating up. After losing to Tyheim Monroe (22.1 ppg, 15.8 rpg) and the Cavs, Gwynedd Mercy fell to Lehman College in an inter-conference showdown in the Bronx, and the Griffins should hope to recover soon. A Feb. 14 game at Neumann could decide which team gets a tournament bye with Cabrini looking close to locked in.

Keystone could be in danger of losing its spot to Marywood, which has a clear advantage if there should be a tiebreaker. The Giants have an upcoming slate of Cabrini, Immaculata (away), Gwynedd Mercy (away), Centenary -- the only “gimme”, and Rosemont (away); that’s a recipe for disaster, but not guaranteed to drop Keystone from the conference tournament. Why’s that? Marywood has lost three straight and has played one more game than the teams it’s trying to catch. It’s an uphill battle for the Pacers, but making up a game or two isn’t an insurmountable task for the final four games.

Update: Lycoming was sitting pretty atop the conference just two weeks ago, but losses in two of its last three to Widener and Arcadia have made things more interesting. While the Warriors win any tiebreakers due to an undefeated non-conference record, they could easily drop two games down the stretch, especially given recent performance. Lebanon Valley-Lycoming will be worth a watch on Feb. 13, and if Albright doesn’t surrender second position, the conference’s top seed and home-court advantage could be decided in a season finale clash between Lycoming and Albright…at Albright.

Overcoming a two-game deficit with four contests left is a tall order, but Widener and Alvernia shouldn’t be counted out quite yet. Tyler Drews (15.7 ppg) and the Pride have won four straight, including victories over Lycoming and Lebanon Valley, and with matchups coming up against both Messiah and Arcadia, they could make up the gap in a heartbeat. Alvernia, without as strong a non-conference record, is less likely to get through, and has to travel to Albright and to Widener in two of its four remaining games.

Messiah and Arcadia, meanwhile, are fighting to get out of the fourth and fifth spots, since both mean an extra game in the conference tournament. Lebanon Valley has played one more game and therefore has the advantage, yet the Dutchmen have lost two straight and face winning teams in each of their final three outings. None of these teams have easy remaining schedules, and with that in mind, any result could cause a shift in seeding. Only Lycoming is locked into a playoff spot.

Update: In that no team has clinched its spot in the conference tournament with four games to go, this is the tightest race of the bunch. DeSales and Wilkes are separated by non-conference record alone and will face off on Feb. 7 -- Wilkes defended its home court in the first leg but can the Bulldogs do the same? Misericordia is just a game back of either team and plays both during its final four regular season games. Led by the conference’s leading scorer, junior guard Jason Kenny (19.6 ppg), the Cougars have a legitimate shot to sneak away with home-court advantage in the conference tournament if they finish strong. If not, a poor enough showing could keep them out of the postseason.

King’s, with the league’s top scoring offense but bottom scoring defense, is right on the bubble at 6-4 after beating Eastern in overtime, but it’s going to be an uphill battle to break into that field of four. The Monarchs face all three of the current top teams over this final stretch, and despite a three-game win streak, it will be difficult to snatch more wins than Eastern -- the Eagles face the league’s bottom three teams and Wilkes over their last four contests. We’ll need to see some upsets for King’s to make its way into the playoffs, and that’s certainly not an option to rule out.