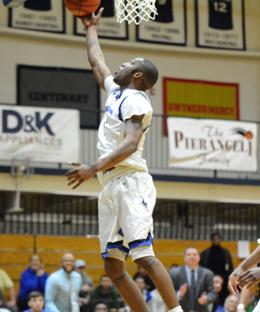 Anthony Wright-Downing (above) finishes off one of his 10 layups in Cabrini's win over Gwynedd on Wednesday night. (Photo: Josh Verlin/CoBL)

That sounds like a simple enough task for the Cabrini junior: hit the easiest shot in the game.

But the in fast-paced, physical Colonial States Athletic Conference (CSAC), there are no easy layups. And watching Wright-Downing in action, it’s clear that making layups is a skill the 6-foot-2, 180-pound wing has gotten down to a ‘T.’

Whenever one of his Cavaliers teammates drives the lane, Wright-Downing is on the opposite block, hands waiting for a dump-off pass; if the pass doesn’t come, he’ll stick his nose in for a rebound, eager for a second-chance opportunity. And when it comes to the actual bucket, he’s capable of scoring with either hand, using the glass and his body to shield defenders, his strength and athleticism to get to where he needs to be.

It’s where he lives, and he’s happy doing it.

Scoring tough buckets around the rim has been second nature for Wright-Downing since he starred at Sankofa Freedom Charter in Philadelphia, where he averaged over 26 ppg as a senior, including a school-record 54-point outing; he also became the first player from the school to play basketball in college.

And after spending one season at Raritan Valley (N.J.) CC, he’s bringing his talent to the Division III program in Radnor (Pa.) with yearly NCAA Tournament aspirations. And the Cavaliers didn’t take long to hone in on his talent.

“Last year, when he came in second semester, he came in, he was struggling shooting the ball and a couple teams we played left him completely open,” Cabrini coach Tim McDonald said. “I said ‘listen, if you get the ball and they’re not guarding you, you don’t have to shoot, you can get to the rim, keep making layups.”

Wright-Downing made plenty of layups on Wednesday night -- 10, to be exact -- to go for a career-high 23 points as Cabrini downed Gwynedd Mercy 92-88 to keep pace in the CSAC regular-season championship hunt.

He was equally productive in both halves, scoring 13 points and grabbing five rebounds before the halftime break, adding 10 pounds and four more boards after it.

For a while, he was even out-rebounding his teammate, senior forward Tyheim Monroe, the nation’s leading rebounder (15.8/game); Monroe finished with 18 points and 10 rebounds for his 14th double-double of the season, though he had just three points and four boards at halftime.

“To (Gwynedd’s) credit they do a really good job, probably the best out of anyone in our league at defending him,” McDonald said. “Makes it a lot better to have Anthony be able to come in and clean up some of the times when Tyheim can’t get to it.”

It’s taken Wright-Downing nearly four years since graduating high school to really find his spot in the Cabrini rotation. He spent his freshman year at Raritan Valley in 2014-15, but then sat out the next season before finding his way to Cabrini in the fall of 2016. But issues with getting his transcript over from Raritan Valley cost him the first semester that season; in nine second-half appearances, he averaged 4.0 ppg and 1.7 rpg in under 10 minutes.

Wright-Downing suffered a setback this season, when he was forced to sit the first semester for academic reasons. But he got his grades up to be able to return to the court for the spring semester, and has blossomed.

After his big game against Gwynedd, Wright-Downing is now averaging 11.8 ppg and 5.5 rpg in 19.5 mpg off the bench. He’s hitting a team-high 69.7 percent of his shots, almost all from right around the rim.

“He has really worked on his outside shot, and in practice he shoots the ball really well, but I told him especially for right now, we don’t need you to do,” McDonald said. “We take way too many 3s already as it is, that we don’t need another guy to do that. So that is his role is to be that slasher, get to the rim, obviously continue to make layups and dunks, that’s what he does.”

But finishing in the top two guarantees a bye through to the league semifinals, as well as crucial two days’ extra rest at the end of the regular season. Cabrini does have to play Rosemont and Immaculata but has split with both Neumann and Gwynedd, who play each other a final time on Feb. 14 at Neumann.

“We know we have to take care of business, everyone knows the standings in our league,” McDonald said. “Every game has to matter, but this is a huge win for our guys...to be able to come and execute and get the win at the end in a tough environment, it’s pretty fun.”