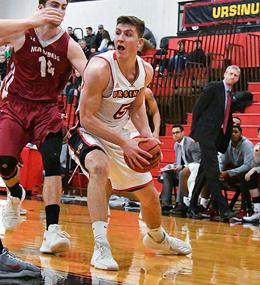 Even though you might not notice it by looking at the box score, Remi Janicot plays one of the most important roles for the Ursinus basketball team.

A native of Paris, France, Janicot was a starter his first three years in a Bears uniform. The 6-7 forward enjoyed a solid average of around eight points a game, and was a versatile piece the Bears could count on for a basket when they needed it.

But this season, things are different.

Instead, Janicot comes off the bench, and takes on a new role; that of a mentor.

“It’s been a transition,” Janicot admitted. “I’m trying to embrace my role. I teach the younger guys when they do something wrong.”

Despite coming off the bench, Janicot is still averaging 8.5 points per game for the Bars. But this year, Janicot has specifically been tasked with working with the newcomers of the program, showing them the ropes as they begin to see more minutes on the floor.

In practices and even in games, Janicot has personally been helping Gordon get used to the college game.

“After a play I take him aside and show him what he could have done or what he should have seen,” Janicot said. “That’s what seniors are supposed to do in this program. Try to pass it on, and pass it on every year.”

By working with Janicot, Gordon has seen a tremendous improvement in his productivity level and his minutes on the floor. After not getting to many meaningful minutes for the first 10-or-so games, Gordon has been seeing his minutes go up as of late.

“In the practices I would mess up a play,” Gordon said, “and [Janicot] would say, ‘no, you’re fine. Do it like this,’ and he’d help me through plays and positioning with rebounding. It’s great playing with him.”

Janicot hasn’t been the only one helping Gordon get adjusted to the speed of the college game. Joe LoStracco, a senior forward, and sophomore Shane Stark, who took Janicot’s place in the starting lineup, have also given Gordon some pointers here and there.

“Really, it’s nice to see work is paying off,” he continued, “But I have to thank Joe LoStracco, Remi, Shane Stark, the forwards, they are helping me develop.” 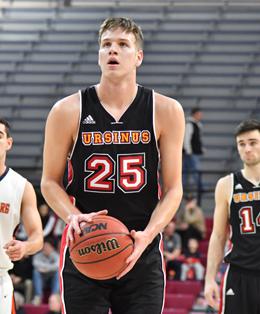 George Gordon (above) has become a key member of the rotation the last few games. (Photo: David Morgan/Stylish Images)

Starting with the win at Johns Hopkins at the beginning of the calendar year, Gordon has seen his minutes steadily increase, and Ursinus has been winning games.

Gordon played a career-best 10 minutes in a game against Gettysburg on Monday, scoring a career high nine points.

And on Thursday, in a win 75-61 win over Muhlenberg, Gordon notched eight points in 14 minutes. Gordon scored each of his four field goals in the paint, using his strong frame and soft touch to finish on both sides of the rim.

Even if Gordon isn’t the strongest player on the court, he is learning what it’s like to mesh with a group of experienced teammates, and he realizes how effective they can be if they all play together.

“It’s great playing with them,” Gordon said. “Coach lets our forwards play tough. It’s hard for other teams because we have so much size and it wears teams down which is nice.”

Now that Gordon is added to the regular rotation, Ursinus can afford to play 10 guys; which is what head coach Kevin Small envisioned would be the case prior to the season.
“We talked in the summer about the lineup we thought we would have,” Small said. “We’ve been really fortunate because we have had some nickel and dime injuries...but at this point, we’ve been reasonably healthy. The design we had in staff meetings over the summer has played out roughly the way we thought. I’m also proud because the older guys have embraced roles and are putting the team first.”

With the win over Muhlenberg, Ursinus (11-5, 7-2) extended its winning streak to six games, dating back to its victory over Rosemont College on January 3. The Bears sit tied with No. 21 Franklin & Marshall for second place in the Centennial Conference, and one game behind No. 15 Swarthmore. This is the Bears best start through 16 games since the 2009-10 season.

Throughout the six straight victories, there hasn’t been just one or two guys doing the majority of the scoring.

On Thursday, Stark led the Bears with 14 points, and Zach Quattro and Ryan McTamney both added 12. Of the 10-man rotation, all but two of the players found themselves scoring five-or-more points. On the season, six of the ten rotation players averaging about five points a contest.

But what makes the Bears so dangerous is their ability to integrate new guys off the bench. Since the start of the season, Gordon has seen his minutes increase, and the number in the win column has gone up as well.

“We are a team that puts other teams on their heels naturally,” Small said. “We have a pretty efficient offense and we play a paced game and tend to run, it takes away some other team’s strengths because they have to make choices about what they’re doing. Because we tend to play more guys, we are fresher in key moments.”