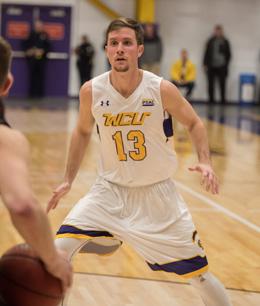 When he was looking for a new team last spring, Steve Smith wanted to find a place where he could win.

During his first two seasons at Fairfield University, Smith’s teams won a combined 14 games. As a junior the Stags picked up 19 victories, but an injury forced Smith to miss his entire senior season, and he was stuck with a 33-63 record during his college career.

Following a 14-15 season, West Chester wouldn’t appear to be the perfect fit to satisfy Smith’s desire to win. However, he put his faith in head coach Damien Blair and the rest of the Rams’ assistants telling him next year’s team could be a good one..

“The thing is, I trusted the coaching staff because they were telling me prior to committing that they had something special,” said Smith, a 6-foot-6 graduate forward.

Smith’s confidence in the Rams’ staff has paid off thus far.

West Chester started off the season with 12 straight wins and came into this week ranked No. 18 in the NABC/NCAA Division II Men's Basketball Rankings.

After Frank Rokins’ chase down block on Wednesday sealed a 76-74 win against East Stroudsburg, the Rams are now 15-1 and at the top of the Pennsylvania State Athletic Conference standings.

”My first two years of college at Fairfield, I lost a lot,” Smith said. “This is a first for me to start winning. Prior to coming here, my main goal was to make history somewhere, and I knew coming here that this was the spot.”

Smith saw limited action in his first three seasons at Fairfield. He averaged just 2.3 points in 8.9 minutes per game as he struggled to find playing time behind Marcus Gilbert, the fourth leading scorer in Stags’ basketball history.

With Gilbert gone, Smith expected a breakout senior season for himself in 2016-17. He said he was playing well in the summer and was very optimistic he would have a much bigger impact in his last year.

Then, in late October, he tore all the tendons and ligaments in his left ankle. It was supposed to be a 12-week recovery, but knowing this was his final season, he tried to speed up the healing process. It only set him back as he missed the entire season.

“It was a shame, literally a week before our first game it had to happen,” Smith said. “But the way that I look at it, it’s kind of a blessing in disguise being part of this great group.”

Smith was fully healthy with about two weeks left in Fairfield's season, but he decided to redshirt, so he could have a second chance at his final college season. The Stags didn’t have any room left for Smith on the 2017-18 roster, so he had to find a new place to finish out his career.

During his time at La Salle College High School, Smith and the Explorers attended team camps at West Chester, where he got to know the Rams’ coaching staff. He also played against West Chester leading scorer Tyrell Long, who attended Bishop McDevitt, when the two were both in the Philadelphia Catholic League.

“I reached out to the coaching staff, I came here, they sent me a quick text a week later and from that point on, I was committed here,” said Smith, who committed to the Rams in late April.

Smith has appeared in 16 games for the Rams this season, averaging about 16 and a half minutes per contest. The Ambler native is averaging 5.4 points per game and shooting 37.3 percent from 3-point range.

In Friday’s win against East Stroudsburg, he had a season-high 10 points, shooting 3-of-4 from 3-point range.

“To me, my job’s easy. I just gotta catch it and shoot it,” Smith said. “So all the credit goes to my teammates for finding me at the right moment and passing me the ball.”

The Rams have 10 regular season games left before the PSAC and potentially NCAA tournament.

“We’re going hard every day so we can make history here,” Smith said.