Archbishop Wood finally gets its revenge on Father Judge 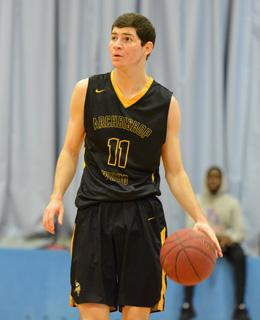 Over the last three seasons, there was only one team in the Catholic League that Archbishop Wood had failed to beat.

Father Judge had dealt John Mosco’s program a defeat in each of their three previous meetings -- including in last year’s Catholic League opener, when the Crusaders upended a Vikings team that went on to capture league, district and state championships.

Given another chance to open up league play against its Achilles heel, Wood finally got over the hurdle -- but not without withstanding another significant challenge from Judge.

The Vikings and Crusaders were tied after one quarter and again at the midway point, but Wood surged ahead in the third to pull out a 53-42 win on the road Tuesday night.

Wood (4-3, 1-0 PCL) has had a difficult start to the season, dropping games against high-profile teams like Immaculate Conception (N.J.) and DeMatha (Md.) while beating South Shore (N.Y.), Girard College and Shipley.

Despite playing with three Division I bound seniors in the starting lineup (and a fourth off the bench), the Vikings needed a positive start to 2018, especially considering the opponent. Judge had been the thorn in Wood’s side each of the last three seasons, culminating in a 68-60 win last year that was one of the biggest surprise results of the entire 2016-17.

Revenge was on Wood’s mind, but that didn’t mean a victory was guaranteed. They learned that the hard way, when they got overconfident and fell flat on their face last year. Those Vikings didn’t lose the rest of the way.

This year’s group would like to repeat that performance.

“This meant a lot to us,” senior guard Andrew Funk said. “[Last year] we were coming off a couple good wins and we were kind of looking past (Judge). We definitely talked about this one a lot and this was big for us.

“They’re a really good team, very well-coached, they run their offense,” the Bucknell-bound senior added. “We wanted to come out and grab this one.”

Funk and his teammates didn’t exactly grab it right away.

The Crusaders’ patient offense resulted in numerous possessions that lasted upwards of a minute, several of which resulted in layups off backdoor cuts. But as the second half went on, there was less and less movement off the ball, and it became clear that Judge’s energy levels were struggling to stay as high as they’d been earlier on.

“I felt like if we could just keep pressing on and off and pushing the ball, that we’d wear them down, and it looked like (we) did,” Wood coach John Mosco said. “I think we were a little out-of-sync, trying to go too wild in the first half, second half we settled in and played defense...we were really in good defensive position.”

It wasn’t until the final few minutes of the third quarter that Wood finally got some separation, getting a put-back slam from Karrington Wallace and a layup from Seth Pinkney to expand the lead to 40-32 going into the fourth. Judge had one final push, getting within 42-40 with under four minutes remaining in regulation, but an 8-0 response run from Wood put it away.

Pinkney, a 6-10 center with a 7-4 wingspan (Mosco said they measured this week), finished with 15 points, seven rebounds, two blocks and two assists, showing off his improving offensive abilities with a smooth 15-foot jumper in the third quarter. Funk added 12 points and Quinnipiac commit Ty Pickron added 10 as he works his way back from a sprained ankle that cost him several games in December.

Judge was led by its trio of returning starters, seniors Drew Riley (14 points, eight rebounds) and Tom Quarry (12 points), plus junior Shane Dooley (12 points, four rebounds). Quarry, a 6-6 wing forward and Johns Hopkins commit who had been the Crusaders’ leading scorer, was guarded closely all night by a combination of Pinkney, the 6-7 Wallace and 6-4 Julius Phillips, who rarely let him come out for the air.

Sean Tait’s Crusaders might not finish as high as they did last year, when the program’s all-time leading scorer (ESU’s Marc Rodriguez) led them to a 9-4 record in PCL play (16-7 overall) and fifth-place finish in the league.

But there’s no discounting the value of starting off the year on the right side of the ledger, especially with games against Carroll (at Carroll), Archbishop Ryan and Bonner-Prendergast (at home) all coming up next week -- following a high-profile matchup against Montverde Academy (Fla.) this Friday in the Cancer Research Classic in West Virginia.

“Definitely big to win your Catholic League opener, no matter who it’s against or where it’s at,” Funk said. “Just momentum the rest of the way. It’s a new season in the Catholic League, so to be 1-0 feels really good.”