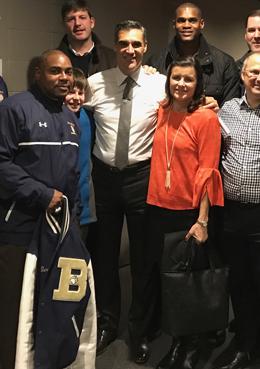 The 766th game of Jay Wright’s head coaching career was unlike any he’d ever experienced. For instance, he’d never spoken to the opposing school’s alumni group less than two hours before first tip.

But then again, he’d never faced Hofstra before Friday, either.

“I told the guys a few days ago ‘Look, I’m just telling you, I’m messed up on this one,’” Wright said late Friday night, after top-ranked Villanova remained unbeaten with a 95-71 victory over Hofstra in a “home” game for the Wildcats at Nassau Coliseum, located across the street from the Hofstra campus.

Wright, of course, began his head coaching career at Hofstra, where he took over one of the bottom 10 Division I programs in 1994 and steadily built up the then-Flying Dutchmen over the next seven seasons. His final two teams at Hofstra won the America East and advanced to the NCAA Tournament, after which Wright landed the Villanova job — the one gig everyone on Long Island understood was the dream job for the Philadelphia-area native.

And for the next 16 seasons, Wright resisted the idea of facing Hofstra — initially because his successor as head coach was Tom Pecora, his longtime assistant at Hofstra and one of his best friends in the business. But even after Pecora left Hofstra following the 2009-10 season, Wright had little interest in playing a school for whom he still has such strong feelings.

Wright’s two youngest children were born during his Hofstra tenure. He and his wife, Patty, remain close friends with many of their old Rockville Centre neighbors. In addition, one of the current Hofstra assistant coaches is Craig “Speedy” Claxton, who arrived on campus in 1996 as Wright’s first big-time recruit and led the Dutchmen to the program’s first NCAA bid in 23 years in 2000.

“I come back up here a lot,” Wright said. “But to come back in basketball and play against Hofstra — like I said, I never wanted to do that, really, just because I don’t want to beat Hofstra. I root for Hofstra. We watch Hofstra games. We follow all the Hofstra scores. My kids still follow the Hofstra scores.”

It took the ongoing renovations at Villanova’s on-campus arena, the Pavilion, to help convince Wright to reunite on the court with Hofstra. Due to the renovations at Villanova’s on-campus arena, the Pavilion, the program had to get creative with finding home games. The management of Nassau Coliseum, which reopened in the spring following a two-year refurbishing project, called Wright and offered to host a game in front of Villanova’s plentiful New York-area alumni base.

“It’s a year where we don’t have a home court, so I was like, yeah, that’s perfect,” Wright said. “Then I said ‘Could we play Hofstra, since we’re going to be here?’”

Wright might have wondered what he got himself into during a week in which he found himself far more distracted than usual.

“We’re usually really, really focused — I’m really focused,” Wright said. “And I tried to be. But coming back here, (there are) just so many great feelings, emotions.”

But Wright realized all night Friday he’d done, pardon the pun, the right thing by returning to Long Island. He surprised a crowd of about 250 Hofstra boosters gathered for a pre-game party at the Marriott, located across the street from the Coliseum, by showing up with Hofstra coach Joe Mihalich and delivering a brief speech.

The Wildcats further soothed Wright’s nerves with a methodical victory. Villanova trailed 9-7 at the first media timeout but carried a 52-31 lead into the locker room — appropriately enough, Phil Booth ended the first half with a buzzer-beating 3-pointer — and never led by fewer than 18 points the rest of the way.

Wright capped an unprecedented day by spending 20 minutes outside the Villanova locker room with several players (including his first recruit, Jamil Greene, who flew in from Las Vegas for the game) and staff members from his first Hofstra teams. The Dutchmen, playing a far-flung non-conference schedule and adjusting to the North Atlantic Conference/America East with many players originally recruited when Hofstra was a part of the piecemeal East Coast Conference, went just 31-51 in Wright’s first three seasons.

But judging by the laughs, stories and hugs that were exchanged, Wright wouldn’t trade the experiences for anything, especially on a night he thought might never happen.

“Very emotional for me. I don’t show it, but I’m an emotional person It was tough, and I appreciate our guys staying focused, I don’t know if I was at the top of my game. They were.”