All-City Classic Philly vs. Everybody Standouts 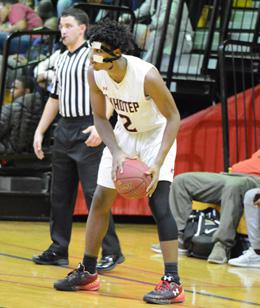 Chereef Knox (above) was one of several standouts at Sunday's Philly vs. Everybody tripleheader. (Photo: Josh Verlin/CoBL)

Three of the best teams from the Philadelphia area took on three top programs from the NYC metropolitan region on Sunday, in the Philly vs. Everybody tripleheader run by Philly USA Basketball.

Philly went 2-1 in the three games; here are some standouts from the event:

Mohamed Fofana (2018/Wings Academy, N.Y.)
The sole reason Wings Academy was able to pull out a win over Girard College was due to the efforts of Fofana, who dropped 28 points, accounting for more than half of his teams’ scoring in the 54-48 victory. He was 10-for-19 from the floor and 4-for-8 from 3-point range. A 6-foot-6 wing, Fofana continually found holes in the Girard defense, whether through use of the one-dribble pull-up into the zone or by moving without the ball and getting to spots on the perimeter for a number wide-open triples. Right now, Fofana said his recruitment is quiet; a few more performances like that should have a few scholarship-level schools on him.

Christian Ings (2019/Neumann-Goretti)
The next in line of great N-G guards is the ultra-competitive Ings, who fits the typically fearless Philly stereotype just like his predecessors Quade Green (Kentucky), Zane Martin (Towson), Lamarr Kimble (St. Joe’s), Ja’Quan Newton (Miami) and more. His well-rounded game showed in a winning effort against Our Savior New American (N.Y.), when he complemented 12 points with two each of rebounds, assists, steals and blocks. He also made a huge defensive play in the final 20 seconds, coming up with a steal on an inbounds play while getting fouled; his two FTs put the Saints up in a game they won by two points after trailing by double-digits earlier in the fourth.

Mikeal Jones (2020/Girard College)
Wings Academy didn’t have much of an answer for the 6-8 Jones in the second half of their matchup, after holding him to four points without a field goal in the opening 16 minutes. Jones came out of the half a changed player, getting 12 of his 16 points, while also grabbing the majority of his 16 rebounds. A mobile 6-8 wing forward, Jones is one of the more versatile prospects in the area, doing everything from running the Girard offense to playing the ‘5’ defensively, and he doesn’t struggle much in any of it. His 3-point shot is still coming around, but if that becomes a consistent weapon, the highest levels of hoops could very well be within reach.

Chereef Knox (2019/Imhotep Charter)
The depth of Imhotep’s junior class, and the Panthers’ group of wings in particular, was in full display on Sunday. Andre Noble starts three such juniors, all Division I prospects, and none of whom are Knox; but when he came off the bench, the 6-6 junior proved difficult to take off. He found his way to 12 points and five boards in the win, as well as a key fourth-quarter block, and also played terrific defense on a Roselle perimeter group that boasts just as many Division I talents. Last year, Knox was used as more of a ‘4’ or ‘5’ on a somewhat-undersized ‘Tep squad; now at his natural ‘3’ position, he looks much more comfortable.

Dymir Montague (2018/Neumann-Goretti)
A three-year contributor for the Saints, Montague has flown under the radar of some of Neumann-Goretti’s various Division I prospects, but he’s quietly become one of the best players on Carl Arrigale’s roster. A muscular 6-3 guard, Montague went for 18 points, five boards and five assists, leading N-G to a comeback win over OSNA; his three-point play in the fourth quarter got his team within one, and after N-G took the lead, he came up with a game-saving block with under three seconds left. He’s clearly in Division II scholarship territory, but low-major Division I programs might want to start poking around. 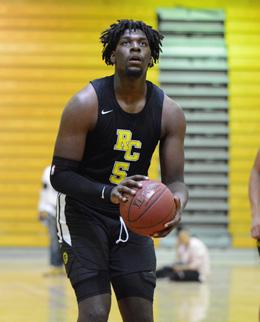 Nazreon Reid (above) was the highest-profile recruit at the event. (Photo: Josh Verlin/CoBL)

Nazreon Reid (2018/Roselle Catholic, N.J.)
Certainly the most heralded prospect to step foot in the gym all night long was Reid, a Louisiana State commit and a five-star prospect who’s a unanimous top-10 prospect in his class. Standing a powerful 6-10 and around 240 pounds, Reid is a physical specimen to behold, but the fact that he has the handles and passing ability many point guards would covet is what really sets him apart. On this particular night, he was spending too much time taking 3-pointers (going 1-5 on his attempts), and not taking as much advantage of his physical attributes as he could have (six rebounds), but there’s no denying his talent.

Adama Sanogo (2021/Our Savior New American, N.Y.)
There’s already been quite a bit of buzz about this freshman big man, and Sanogo increasingly showed why as the OSNA/Neumann-Goretti game wore on. The athletic, mobile, 6-foot-8 center competed on both ends from the get-go, though 12 of his 16 points came in the second half as OSNA built a lead it couldn’t sustain. Sanogo got most of his production off put-backs, but not of the easy tip-in variety; there were several where he had to put the ball on the floor, and he also displayed terrific body control and touch in mid-air on several finishes. Then, in the fourth quarter, he mixed in a surprising behind-the-back pass to a teammate for an assist, and also came up with a pair of blocks. If he continues to grow, or adds a face-up game, look out.

Kahlil Whitney (2019/Roselle Catholic, N.J.)
High-majors are all over this athletic young wing guard, and just looking at him it’s clear to see why. Standing 6-6 with a lithe, athletic frame, Whitney is an impressive prospect as a combo ‘2’ and ‘3’ who can stretch defenses but also serve as a secondary ball-handler and versatile defender. His 3-point shot wasn’t falling on Sunday (0-3), but his form was true; he still found his way to 10 points thanks to a few high-level finishes, including several through traffic. A two-end competitor, his stock should skyrocket next summer, though he already holds offers from Syracuse, Georgetown, LSU and more.