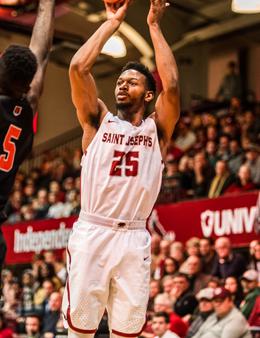 James Demery (above) and St. Joe's will try to be the first Big 5 team in five years to stop Villanova. (Photo: Mark Jordan/CoBL)

It’s a busy day in the Delaware Valley today, with one big-time Big 5 matchup highlighting several college hoops games in the region:

Breakdown: St. Joe's (4-3) has won each of its last two games against Sacramento State and Bucknell to bring its record back above .500, however the Hawks will have a little bit more of a difficult task taking on the No. 4 team in the nation. Forward James Demery, who had 20 points and eight boards in the Hawks’ win against Bucknell, is averaging 17.1 ppg and 5.1 rpg seven games into his senior season. Also in his final year playing under Phil Martelli, senior guard Shavar Newkirk is the team's leading scorer at 17.4 ppg; he’s doing so on 37 percent shooting (28.2 percent from three), which is a decrease from the 46.6 percent (39.6 percent from three) he shot in 2016-2017, when he averaged just over 20 ppg in a dozen games before tearing his ACL. St. Joe’s is still waiting on the return of sophomore wing Charlie Brown, out due to a left wrist fracture sustained in the preseason, but he’s not expected back for this one.

As for Villanova (7-0), Jay Wright has kept his team in the Top 5 in the nation despite losing his senior leadership and star player in now Lakers guard Josh Hart. The Wildcats are shooting over 50 percent (37.8 percent from three) as a team this season, and will be going for its 20th Big 5 win in a row following a 90-62 route of Penn on Wednesday. Villanova is now being lead by Jalen Brunson and Mikal Bridges, however Wright has once again been getting production from all parts of the lineup, including 11.9 ppg from sophomore guard Donte DiVincenzo and 10.6 ppg and 5.9 rpg from junior forward Eric Paschall. The Wildcats will also look to continually increase the roll and production from ESPN Top 100 #18 recruit Omari Spellman, who despite being among the Wildcats leaders in scoring with 14 in the win against Penn, is still averaging 8 ppg to go along with 6.9 rpg.

Simply put, the Hawks are going to need to shoot the lights out in order to have any chance of running alongside the Wildcats, something they haven't been able to do thus far this season. The Hawks are shooting 42.1 percent (33.9 percent from three) this season, which is no match for the 50.5 percent (37.8 percent from three) that Villanova is shooting this year. Villanova is also an excellent defensive team, holding their opponents to under 63 ppg on under 50 percent shooting all while scoring more than 85 ppg themselves.

Prediction: It’s hard to find a legitimate reason why Villanova won’t cruise to its 20th consecutive Big 5 victory and eighth win of the season. The Wildcats have picked up right where they left off in recent seasons and the Hawks have three losses to unranked opponents already this season. That being said, this is the “Holy War,” arguably the best rivalry in the Big 5, and St. Joe’s won’t go down without a fight. Nevertheless, getting a win against the Wildcats for the first time since 2011 would take a near perfect game and perhaps a little bit of luck, as the Hawks have lost by an average 25.7 points in each of the team's last four meetings.

Drexel vs. Rider
When: 4 PM
Where: Daskalakis Athletic Center
Watch: DrexelDragons.com
Breakdown: Drexel (3-4) ended a three game losing skid on Wednesday with a 68-67 home win against Lafayette, after Austin Williams had a dunk with 13 seconds left and then sealed the victory with a block. The senior forward is averaging 10.3 ppg on 66.7 percent shooting (37.5 percent from 3) as well as 8.6 rpg this year, and is one of five players for the Dragons averaging in double figures. However, the Dragons are lead by the likes of Tramaine Isabell, who is averaging 19.8 ppg and 8.5 rpg. The junior guard in his his first year playing for head coach Zach Spiker after transferring from Mizzou following the 2015-2016 season.

Rider (5-2) is coming off an 88-84 loss at Providence on Wednesday night, the Broncos first loss to a non ranked opponent this season. The Broncos are lead in scoring by redshirt freshman Jordan Allen. The 6-4 guard is scoring 19.3 ppg on 44.4 percent shooting from the field and 47.3 percent from beyond the arc. Other notable players to watch from Kevin Baggett’s squad include freshman forward Frederick Scott, who is averaging 13.7 ppg and 8.6 rpg in his first year with the Broncos after just nine minutes of playing time in four games at Depaul during the 2015-2016 season; as well as Conwell-Egan graduate Stevie Jordan. The sophomore guard has averaged 15.3 ppg, 7.7 apg and 5 rpg so far this year, however he shoots just above 40 percent from the field and at 26 percent from 3-point land.

The battle of talented lead guards should draw the attention in this game, as Stevie Jordan’s 7.7 apg is just shy of the 10 apg Drexel averages as a team. However, Jordan is prone to turning the ball over, giving the ball away seven times already in two separate games this year. The Dragons will look to Isabell to put the team on his shoulders on both ends of the floor and to have another breakout performance as he did in the 68-67 win over Lafayette with 19 points and eight boards, a game in which he shot 46.7 percent (42.9 percent from 3).

Breakdown: The Leopards (0-6) are still looking for their first win of the season, though they’ve come close several times: three of their losses are by four points or fewer, and they’ve only played once at home. Quinnipiac, under the direction of first-year head coach and former Villanova assistant Baker Dunleavy, is only 2-5 this season and very much in a rebuilding process, though they did just beat UMass on Wednesday. Lafayette is led by senior forward Matt Klinewski’s 18.2 ppg and 4.7 rpg; freshman guard Justin Jaworski, a Perkiomen Valley grad, is behind him at 12.8 ppg after exploding for 24 points in the Leopards’ last game, a 68-67 loss at Drexel. The Bobcats are led by senior forward Chase Daniels (15.4 ppg, 5.0 rpg) and senior wing Cameron Young (14.1 ppg, 6.3 rpg). So far this season, Quinnipiac’s best feature has been its ability to get to the foul line, while Lafayette’s best defensive feature has been making sure its opponents stay off it. If the Bobcats can get their share of freebies, that’ll swing the pendulum in their favor. 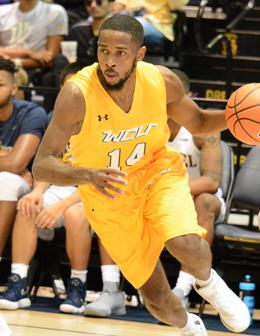 Tyrell Long (above) and WCU will put their 5-0 record on the line against Indiana (Pa.) (Photo: Josh Verlin/CoBL)

Breakdown: Coming off an appearance in the 2016 PSAC championship game, last year was a disappointing season for West Chester, which finished 14-15 overall and 11-11 in league play. But this year, the Rams are off to a strong start, having won their first five games, heading into a matchup with one of the top programs not just in the PSAC but in all of Division II hoops; the Crimson Hawks (5-3) have made seven of the last eight NCAA Tournaments, missing out only in 2016. West Chester hasn’t always been winning pretty, hitting only 27 percent of its 3-point shots and only 59 percent from the foul line, but they’re out-rebounding their opponents and locking down on the defensive end: teams are shooting just 37 percent overall and 27 percent from 3-point range against the Rams. Senior wing Tyrell Long (20.6 ppg, 7.6 rpg) and junior wing Jackson Hyland (17.2 ppg, 4.2 rpg) are the go-to scorers for WCU, which is also getting a nice boost from JUCO transfer Frank Rokins (10.2 ppg, 8.2 rpg), who brings some of the defensive toughness they lost with the graduation of Matt Wiseley two years ago.

Holy Family vs. University of the Sciences
When: 3 PM
Where: Holy Family
Watch: HFU Athletics

Breakdown: It’s a Central Atlantic Collegiate Conference (CACC) showdown in Northeast Philadelphia, as the Tigers (1-4) play host to the Devils (4-3) in the league opener for both teams. Don’t let Holy Family’s record fool you -- R.C. Kehoe’s group has played a tough non-league slate thus far, with games against two teams from the powerful NE-10 conference and a trip to Bloomsburg before finally winning at Queens College on Sunday. The Devils similarly haven’t had a bad loss, taking defeats only in a trio of tough road games: at Kutztown, St. Thomas Aquinas and Indiana (Pa.) before bouncing back to beat Pitt-Johnstown on Sunday their last time out. This game could be won and lost on the boards: USciences owns a +5.9 margin on the glass so far, while HFU has been getting outrebounded by 6.4 boards/game. The Tigers need to keep that differential close to have a good shot at getting off to a good start in league play. Holy Family is led by sophomore wing Maliq Sanders (18.6 ppg, 7.2 rpg) and junior guard Mekhi Bryant (14.8 ppg, 3.4 apg); USciences is paced by senior forward Will Gregorits (15.3 ppg, 9.6 rpg) and junior Brendan Crawford (13.3 ppg, 4.0 rpg).