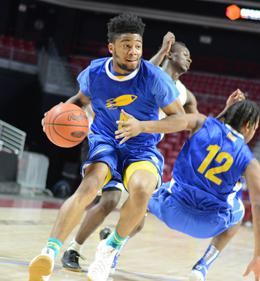 After Audenried’s 19-5 season last year, the Rockets were were preparing for another year in the Public League’s “B” division.

In the Philadelphia Public League, whoever wins each division moves up to the higher division. The Rockets were tied for first place in the “B” division with Mastery Charter North last season. At the coaches meeting for this year’s realignment, Mastery was chosen to move up to “A”.

After that decision, Del-Val Charter closed it’s doors, leaving a void for a team to fill in the “A” division.

Since Audenried was tied for first last year, the Rockets were invited to join the “A” division this year, and quickly jumped on the opportunity.

“I’m ready for the challenge,” head coach Kenyatta Bey said on the new opportunity. “It’s going to be a lot of work. I let our guys know we don’t have any cupcakes on our schedule, we’re going to be playing powerhouse teams every game.”

Those teams include Constitution, Mastery North, Martin Luther King, Math, Civics, and Sciences, and the Imhotep Panthers, who finished third in the nation last year, according to USA Today.

McNeal-Wright, a 1,000 point scorer, led Audenried in every statistical category last year. A quick guard with a knack for setting others up for buckets or fighting for rebounds in the post, McNeal-Wright will leave a big hole in this offense.

“He was our go to guy,” Bey said on McNeal-Wright. “It’s going to be really hard, but we’re not going to rely on just one guy this year. We’re going to fill the void.”

As for the guard position, a pair of 6-foot twin guards, Keyon and Stephon Maddox have transferred in from West Philadelphia High School. Both can shoot the ball from deep and love to play up-tempo, getting out in transition and getting to the rim. Bey is especially excited about how they play together and feed off of each other.

“It’s one great player when they’re both on the court,” he said. “They play really well together. We want to give them an opportunity to play for us.”

Expect the starting lineup to be rounded out by junior forward Quadree Dempsey-Brown, a transfer from Southern High. Dempsey-Brown is a back to the basket big, and at 6-4 can step out and hit the mid-range jumper.

One of the other seniors who graduated last year was 6-6 forward Terrance Moore, now a freshman at D-II West Chester University. The 6-6 post player was a weapon the Rockets could rely on to grab rebounds and fill space in the paint.

Bey stressed the fact that this year’s team is going to be very different from the teams in the past. With all player being able to handle the ball and run, expect the Rockets to do just that this year.

“I can’t compare them to last year’s team because last year we had some guys that could do some things down low and some guys on the perimeter,” he said. “This year we don’t have a lot of size, we‘re all guard size. We’re going to play more up tempo and with more pressure.”

Last year, in Bey’s sixth at the helm for Audenried, the Rockets made it all the way to the PIAA 3A state semifinals, before falling to Imhotep 70-51, at Temple’s Liacouras Center. While the Rockets might not have come out on top, they learned what it takes to win at the highest level.

“What I learned is you need to have a lot of discipline,” Bey said. “We don’t have as much talent as the other teams, so we need to be more deliberate, disciplined and scrappy.”

With a new challenge in the “A” division of the Philadelphia Public League, the Rockets hope to make it back to the state tournament, even if they don’t have their superstar leading the way.