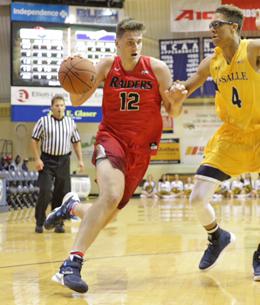 All-American Dustin Sleva (above) and Shippensburg are ranked No. 8 in the national D-II preseason rankings. (Photo: Tommy Smith/CoBL)

Though most of the attention in the college hoops world is focused on Friday as the day when the Division I hoops season begins, it’s also the day where the vast majority of Division II programs will begin their seasons as well.

The D-II scene in the Philadelphia area is strong, though it consists almost entirely of schools from two conferences: the Pennsylvania State Athletic Conference (PSAC)’s East Division, and the Central Atlantic Collegiate Conference (CACC)’s South Division. The only school that doesn’t fall into one of those two leagues is Lincoln University, which competes in the CIAA.

Aside from the team at the top of our preseason poll, every team in the area has to replace multiple major pieces from last year, making this season a little bit harder to predict. We’ll be updating this poll every two weeks throughout the year, and expect to see quite a bit of movement, especially early on, as we find out more and more about these squads.

Update: West Chester experienced something for the first time last year under Blair -- a losing season. Despite the loss of two of the team’s top five scorers in Jackson and Bare, the Rams are confident they’ll reverse that trend this season. They do have a pair of talented scoring wings in 6-6 senior Long and 6-5 junior Hyland, while 6-2 junior Penecale provides a strong on-ball presence who can occasionally bust out in the scoring column as well. Blair’s group will benefit greatly from the additional presence of junior college transfer Frank Rokins, a versatile 6-4 wing who can handle the ball but is also a terrific rebounder; he scored 18 points and grabbed 12 boards in an exhibition loss to Drexel. Steve Smith, a 6-6 wing forward and grad transfer from Fairfield, should help them stretch the floor in the frontcourt.

Update: When Da-Silva, a 6-2 point guard and Bishop Eustace (N.J.) product, when down with an injury in the second game of the season, USciences struggled, losing nine in a row and 10 of 11 after a season-opening win over LIU Post. But he returned after missing eight games, and the Devils’ ship righted, as they won nine of their final 12 games last year. They open against the same two teams they did last year (albeit at a different venue) before a difficult trip to Kutztown next Wednesday. With the versatile 6-3 McGill playing in Ireland and Okolo pursuing a graduate degree, the Devils will lean heavily on its senior pair Da-Silva and the 6-8 Gregorits, one of the best big men in the CACC. Those two headline seven returners from the top nine; juniors Brendan Crawford, Tanner Kerr and Beni Toure all figure to factor into the rotation. Pauley has also been high on freshman Paddy Casey, one of eight first-year players on the roster.

Update: The Bald Eagles have slowly inched their win total up the last few seasons, from 10 victories in 2014-15 to a dozen the next year, and then one more to get within a game of .500 last season. This certainly seems like the year for Lock Haven to break through into the upper half of the league, with their top four scorers all returning, including arguably the league’s best player in Hinton. A 6-5 guard out of Abington, Hinton is a late-bloomer who redshirted his first year at school and then jumped into a starring role, scoring 20-plus points in eight of his first nine career games, eventually going for 42 (on only 21 shots!) against Mansfield late in the season. Hinton, Brake and Barnes are all only sophomores this season, which bodes well for them long-term; if they can get production out of JUCO transfer Chase Rodgers, a 6-6 Martin Luther King grad, and maybe some help from freshmen Matt Cerruti and Jesse MacPhearson, they could make a run at the top of the league. 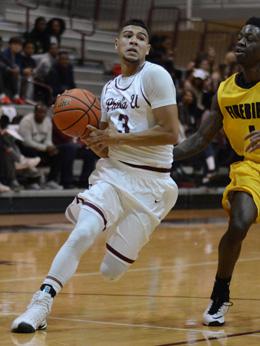 Kylan Guerra (above) will take over point guard duties as a sophomore for Jefferson. (Photo: Josh Verlin/CoBL)

Update: If there’s one thing we know about the Philadelphia basketball scene, it’s this: don’t bet against a team coached by Herb Magee. The only current active local inductee of the Naismith Hall of Fame, Magee has done everything in his 50 years at a school previously known as Philadelphia University (and before that, Philadelphia Textile), and now he starts his second half-century at the newly-rebranded Jefferson. He’s got to replace two key guards in DiCicco and Gibbs; Gibbs to graduation, DeCicco to the business world after his impressive redshirt sophomore year. On top of that, senior forward and double-double threat Eric Long will miss this season after a knee injury that he suffered last season required further surgery. Magee doesn’t need more than six players in the rotation to be successful, however, and he’s got that. Randolph, a 6-3 wing, has been the team’s leading scorer the last two years; Guerra, a 6-0 guard, is one of three sophomores who will play big roles, along with Prince Hickson and Josh Bradanese. Also in the starting lineup is freshman Alex Gorton, and Magee also brought in two 6-7 D-I transfers in Yevgen Sakhniuk (La Salle) and DeVaughn Mallory (Delaware State). The Rams have actually already started their season, going 2-1 in a trio of games in California as part of an exempt tournament this past weekend.

Update: This year’s Warriors aren’t nearly as big as last year’s, not without the 6-8 Moore and 6-9 Bing on the roster. Harris, at 6-7 and 203 pounds, returns for his fifth season after missing all but five games last year due to injury, and he’ll be the biggest body on the roster. But there’s plenty of guards and wings to make Wilson’s signature full-court pressure, uptempo attack work. Nine players who saw some form of action return to the rotation, and while many will have to take big steps up in rotation, there’s enough foundational pieces here for them to still be very dangerous. Walls, a 6-0 point guard out of La Salle College HS, is a junior and three-year starter, and he has help in the backcourt in redshirt junior Jakwan Jones (4.6 ppg, 2.6 apg), junior Nick Giordano (6.1 ppg) and incoming freshman Marc Rodriguez, a first-team All-Catholic selection out of Father Judge. They’ve got an intriguing group of wings, including 6-6 sophomore Kobi Nwandu and 6-4 freshman Mike Milsip, out of Neumann-Goretti.

Update: The Golden Bears return three of their top scorers from a year ago, when they finished atop the PSAC East division, earning an at-large selection to the NCAA Tournament after falling to Shippensburg in the conference championship game. But that’s just half of the six players who saw double-digit minutes a year ago, as Driscoll generally stuck with a short rotation while a few others saw spare minutes here and there. Gone are the versatile 6-8 Johnson and  sharpshooting 6-6 Connolly as well as 6-3 Austin Beidelman, who averaged 5.7 ppg in 23.3 mpg off the bench. Ridgeway returns for his senior year after setting the program’s assist record as a junior, while Lee and Cuevas are both in their junior years of eligibility. Driscoll also brings in a key pair of transfers in senior guard Rafiq Marshall (Cheyney) and sophomore forward Oenis Medina (Shippensburg); keep an eye on athletic 6-7 redshirt freshman Moe Williams as well.

Update: The No. 8 team in the NCAA Division II preseason poll checks in at tops in our rankings, and for good reason. The Raiders showed just how good they’ll be this year in an exhibition game, giving La Salle all they could handle -- it was a three-point game in the second half -- in a 14-point loss to the Atlantic 10 program, with the 6-8 Sleva going for 15 points. Four of five starters return from last year’s squad, which became the first in Ship program history to win an NCAA Tournament game, though their March Madness trip was ended one game later. Behind Sleva, a First Team All-American, the Raiders have their sights set on having yet another program-best season, as Fite has taken them from a three-win team his first year up to one of the best D-II squads around. And the future looks bright, with 6-4 sophomore Castello one of nine underclassmen on the roster -- including freshman Dom Sleva, Dustin’s younger brother.