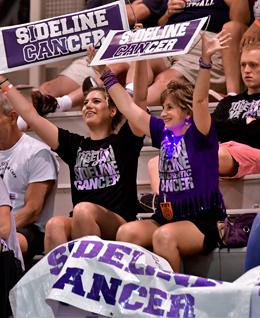 Cathy Griffith (above, right) and one of her interns cheer on the Sideline Cancer squad during TBT on Saturday. (Photo: Mark Jordan/CoBL)

Dressed completely in purple, from her sneakers to her purple eye shadow and light up purple earrings, Cathy Griffith wanted to “turn The Basketball Tournament purple” this weekend.

Griffith carried a large purple duffle bag with her into the gym at Jefferson U (formerly Philadelphia U) and, over the course of a 90-minute basketball game, she pulled from it t-shirts, bracelets, and banners all branded with the same two words: Sideline Cancer.

Everything on her that day went back to those two words. Her white shoelaces had the motto printed on them in purple, and the Converses themselves (picture below) were embroidered with “#Believe” on one foot and “Always” on the other, a phrase she uses often. Her phone case, also purple had “Don’t Stop Believing” written on the back, a song she says has become her anthem.

Getting ready to watch her team -- you can guess what color jerseys they wore -- Griffith enthusiastically greeted the other fans around her. She danced along to the music blasting over the speakers and held up one of her banners.

Her infectious smile welcomed all of those sitting around her as she easily engaged in conversation with everyone, intermittently stopping to loudly cheer as the team played.

“We’re going to give away all these when we win,” Griffith said, referring to the multitude of goodies contained in that purple bag.

Purple, the color symbolizing pancreatic cancer, has become a staple of all of Griffith’s outfits over the past seven years.

After Greg Griffith, Cathy’s husband, was diagnosed with pancreatic cancer in 2010, she and her family completely dedicated themselves to finding a cure by creating the Greg and Cathy Griffith Family Foundation. 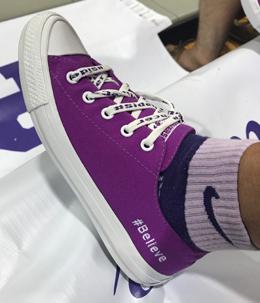 Greg, himself a high school and college basketball student-athlete, sadly passed away in 2011 after a 19-month fight, but Cathy has continued to honor his memory through fundraising events, awareness campaigns and the furthering of their foundation.

“There’s such momentum behind all of this because of Cathy,” said Marissa Lombardi, who is interning with the foundation and was one of several interns with Cathy at TBT. “She’s so positive, she’s so happy; I’ve never seen her without a smile on her face.”

The Sideline Cancer portion of the foundation began in 2012, when a group of high school students from Hollidaysburg, Pa., approached the Griffith family with the idea. Later that same year, the name Sideline Cancer was coined at a Pancreatic Symposium at Penn State-Altoona.

Research for this type of cancer lacks significant funding compared to other forms of the disease. Survival rates have not improved much in the past 40 years, with the five-year rate staying in the single digits, according to recent research statistics for on the the foundation’s website.

Pancreatic cancer is a silent killer. Symptoms like nausea and back pain often don’t show up until well into the late stages of the disease, according to the American Cancer Association. This makes raising awareness about the cancer and early detection a top priority.

Through sporting events, dinners and silent auctions, Sideline Cancer is doing its part in the fight.

“Pancreatic cancer desperately needs a hero, and Cathy Griffith has been somebody who turned her husband's tragic death into a story of hope for everybody that she meets,” said Dr. A. James Moser, Co-Director of the Beth Israel Deaconess Medical Center Pancreas and Liver Institute, which is affiliated with Harvard Medical School. “We support Sideline Cancer and the Griffith Family Foundation because we know that the disease could have no more ardent supporter and vocal voice nationally and internationally than Cathy and her group.”

So far, the Griffith Family Foundation has raised over $230,000 to help fund Moser’s research for the cure at Harvard Medical School, according to Griffith; Moser didn’t dispute the amount.

“Cathy’s effort have really touched an awful lot of people,” he said. “She’s the kind of person that knows how to turn tragedy into a success by getting people together who wouldn’t otherwise ever meet each other.” 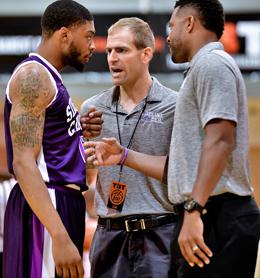 Billy Clapper (center) has been the GM of Sideline Cancer's TBT team for each of its four years. (Photo: Mark Jordan/CoBL)

A big door opened for the foundation when Billy Clapper reached out to Cathy about getting a Sideline Cancer team together for the first TBT hosted in Philadelphia in 2014.

Clapper, the former head coach at Penn State-Altoona and a family friend of the Griffins since 2001, heard about the then-$500k winner-take-all tournament and thought it would be best to coach a team for a cause and immediately reached out to the Griffith Family foundation, for which he had previously organized a fundraising event.

Now in its fourth year in the tournament, the team has shifted to include younger and more talented players who are competing for a prize that’s grown to $2 million. Had they won it all, $700,000 of that would have gone straight to the Griffith foundation for research.

Jarryd Cole, a former forward for the Iowa Hawkeyes and current overseas pro, has been on the team each of the last three years.

“It’s really cool, when we’re out there, with what’s on our jerseys. It gives you a sense of pride, knowing you’re playing with something so big,” Cole said. “My mom suffered from breast cancer, she’s 11 years free this year. It’s pretty hard on my heart to go out there and play for this cause, even though it’s pancreatic cancer, all cancer’s no joke, I’m rooting for all survivors every day.”

A new player on the team this year was Aaron Brown, a Philadelphia-area native and Penn Wood product who played for the St. Joe's’ Hawks from 2014 to 2016 after two years at West Virginia.

“[Playing for Sideline Cancer] makes it even better,” Brown, said. “If you can help out, benefit something and do good things for a good situation, then I’m all for it.”

The players and coaches have naturally become closer with her over the years and they feed off of her always-positive energy.

“Over the few years, Cathy’s been great,” Cole said. “If you ever get a chance to talk to her, the first thing you’ll do is laugh because she’s really funny, but second thing you’ll do is want to connect. I really appreciate her for including me, she’s been like a mom to all of us.”

“She puts a lot into it, the energy that she has,” Clapper added. “For things to happen you have to have energy and motivation and people who have positive attitudes to make that happen. And she’s a leader in that.”

On Saturday morning, Sideline Cancer faced the Zoo Crew, a squad of University of Pittsburgh Alumni.

Throughout the game, Griffith’s confidence in her team and her cause never faltered. Faith is a big aspect of Griffith’s life and the mission she is on.

At halftime, when Sideline Cancer was down four, Griffith said “hold on, I’ve got my secret weapons,” and pulled out a tiny bottle of holy water and a set of rosary beads from her smaller purple purse. As the game went on, the prayers seemed to work and the game quickly turned around.

They won 100-87, the third time in four years that Sideline Cancer’s stay in TBT has lasted longer than just one game.

After Saturday’s game, Griffith stood outside the court with her family, eagerly waiting to hug each one of the players and coaches as they emerged from the locker room area.

The Sideline Cancer team went on to face Team FOE on Sunday, and lost by seven to a team consisting of former players from Kansas, Villanova and more.

That’s okay. They’ll be back.

You can’t keep Cathy Griffith and Sideline Cancer down.

“This is our way of taking something horrible and making it positive,” Griffith said. “That’s what Sideline Cancer is about. It’s literally people coming together with God’s blessing and transforming the outcome of pancreatic cancer.”