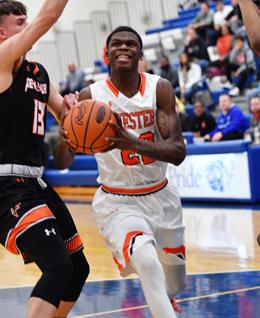 Chester's Jamar Sudan (above) is headed to a STAC program fresh off an Elite 8 appearance. (Photo: Mark Jordan/CoBL)

When Jamar Sudan visited the St. Thomas Aquinas College campus for his official visit last month, he wasn’t looking to be convinced of anything.

After nearly a year-long recruitment by head coach Tobin Anderson and the Spartans’ staff, Sudan went where he was most wanted.

“Since Day One, they’ve been to 75 or 80 percent of my games this year, a couple of practices, even before the season in workouts, and in AAU,” he said.

By February, they’d become his leader: “During playoff time, they came to every single game, even a couple games before the playoffs started, they came to every game, would see where my mind was at, texted me every day...they were really fighting hard to get me.”

Anderson had first locked in on the 6-foot-6 Chester High School product last summer, when Sudan was playing with Philly Pride at an Elevate Hoops event in Philadelphia during the July live periods. He offered Sudan a scholarship almost immediately, and the two began regular communication within a couple weeks.

“It felt like I was home,” he said. “I met the players, they really made me feel like I was part of the team already, and it was an unofficial visit, so I knew that was St. Thomas Aquinas was the place for me.

“It put the cherry on top when I went on the official visit.”

His commitment to the school was actually broken on Twitter by Anderson, when Sudan signed his NLI with the program on May 8. It happened a week earlier, when Sudan texted his future head coach to let him know he was in.

“I didn’t really want to go to school in Pennsylvania, I wanted to get out of Pennsylvania, there’s a lot of distractions where I’m from...and I know if i was close I would always want to come home,” said Sudan, who added his father felt similarly about his moving away from a town that’s well above the national averages in violent crime rates.

Sudan joins a STAC squad fresh off the best year in program history, a 28-6 season that featured a national ranking as high as No. 3 and an East Coast Conference championship before finally coming to an end in the Spartans’ first Elite 8 appearance.

Anderson and his staff have to replace four contributors from that team, including three of its top four scorers, but will have a class of five seniors to rely upon heavily this season.

Sudan’s class, which includes four other incoming freshmen, will be counted on to provide key reserve minutes this year before assuming much larger roles in 2018-19. Anderson’s hopes for the Chester product are as high as any other on the roster.

“What’s been good for us [are] guys that can do a lot of things, I think Jamar can do a lot of things,” the fourth-year head coach said. “Jamar can handle the ball, he can rebound it, get to the basket, make jumpers; he can defend a lot of positions, he’s got good size, he just fits into what we’re looking for.”
During his senior year at Chester, Sudan averaged 15.6 ppg and 8.9 rpg, picking up 17 double-doubles to lead the Clippers to a 22-7 season, including a pair of wins in the PIAA Class 5A tournament before being knocked out by a talented Abington Heights squad in the quarterfinals.

And he did it all despite suffering a groin injury in the practices leading up to the fourth game of the year, a 62-51 win over eventual 6A state champ Reading.

“My senior year, I felt as though I started like a freaking bomb, I started killing it,” he said. “After my injury, I wouldn’t say I plummeted, but it went down a little bit...but my senior year, it was a great year.”