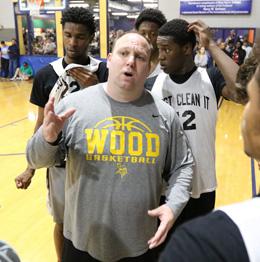 Chris Roantree (above) made his mark on one group of current high school seniors. (Photo: Tommy Smith/CoBL)

Chris Roantree had no idea what his first basketball coaching gig would turn into.

After all, when the then 25-year-old started coaching at a rec program in the Rhawnhurst section of Northeast Philadelphia in 2007, it was just as a way to stay involved in the game he loved to play growing up but fell out of touch with in college.

Who knew he’d turn out to be an extremely important, though behind-the-scenes part of one of the most successful teams in the city this year?

“It’s hard to put into words,” Archbishop Wood head coach John Mosco said about his assistant. “I met him four years ago and he become a great friend, he’s a tireless worker for the good of the program and all the kids involved.”

In high school, Roantree played at Father Judge, where he was part of a Crusaders program that won the Catholic League championship in 1998; in 1999, as a senior, he was named third team all-Catholic.

But, as Roantree put it, “not many 6-2 power forwards playing in college.” So instead he played football at Lycoming, where he got his degree in accounting, landing a job with Ernst & Young out of college.

A few years later, though, Roantree got the bug to get back into basketball.

It took a few seasons of coaching young athletes before he found a group he clicked with, a group of sixth graders which included current Father Judge seniors Marc Rodriguez and Mike Power, and Archbishop Wood senior Collin Gillespie.

They moved from rec league to AAU, where Roantree found himself in charge of the Northeast Sting program in 2012, guiding his group under that banner after their seventh grade year.

By the time the group hit the 15U AAU circuit in 2014, it consisted of Rodriguez, Gillespie and Power, plus Neumann-Goretti’s Mike Milsip, Archbishop Carroll’s Jesse McPherson, Wood’s Ty Pickron, La Salle’s Matt Paulus and one or two others.

Roantree instructs Just Clean It during a timeout at the Donofrio Classic. (Photo: Tommy Smith/CoBL)

They were all part of Catholic League programs, but none of them were anything close to stars, or highly-recruited prospects. But they played well enough to be brought into the Nike-backed Team Final program the following summer, playing under the Team Final Black banner in 2015 and 2016, their final two summers on the circuit.

“He was constantly giving so much time to basketball, and he just put in so much time for us,” Rodriguez said. “It can’t go unnoticed, he puts in all this time and effort and it’s so awesome.”

It was in 2013 that Roantree -- now working as the director of finance at KicksUSA -- met Mosco, when the man who would become his boss in the basketball realm was still an assistant coach at Neumann-Goretti. That spring, after Wood head coach Jack Walsh had stepped down, Mosco called Roantree to inquire about one or two of his players.

“He thought I was going for the job and I didn’t,” Roantree recalled, “and he said hey if I get it, would you come on board as an assistant? Didn’t even know each other, so he took a flyer on me and [now] we’re great friends.”

Archbishop Wood is coming off easily the best season in program history, going 28-3, capturing the Catholic League, District 12 5A and PIAA 5A State Championship titles. Gillespie, who went from unknown two years ago to a Division II recruit last summer and then worked his way to becoming a Villanova signee, won the PCL MVP award and state 5A Player of the Year honors.

Mosco got the coaching award; Roantree certainly earned a share of that trophy, as well as the rest of the Wood staff.

“He’s done a lot for all of us, our group right here, with college and high school and all of that,” Gillespie said. “We really appreciate him as a coach and what he’s done for us, the past seven years we’ve been together.”

Of the the rest of that Northeast Sting group, all will play in college, with most receiving scholarships: Rodriguez and Milsip to East Stroudsburg, McPherson to Lock Haven, Power to Holy Family; Paulus is playing at D-III Ursinus. Matt Cerruti, who came to Archbishop Wood and Team Final Black two years ago, is picking from several Division II options.

“That’s what makes you want to coach,” Roantree said. “More important than basketball, they’re all great kids..we built a relationship with all these guys, and to see them progress and go to college, especially 5-6 of them on a full scholarship, and obviously Collin to Villanova, it’s been a great ride.”

A loss to Team Philly in the Donofrio Classic semifinals marked the final time that group will ever play together in an organized setting, as Rodriguez, Cerruti, Gillespie, Milsip, McPherson, Power and Pickron were all on team Just Clean It, with Roantree (of course) on the sidelines.

“Last time being together, you don’t want to see it end but we had a great run at Wood, we ended great in the AAU season,” Roantree said. “It’s a little bit sad that it’s over...it’s never going to be over anyways, working them out and stuff like that. I can’t wait to see them in college and play at the next level.”

Though this group won’t be coached by Roantree anymore, he’s not done with the gig. Mosco and the rest of the Wood program are still going strong, and Roantree has moved onto the bench of Team Final’s main 16U team, where he’ll be coaching quite a few more Division I prospects.

As it turns out, while Roantree was getting his group into high schools and then colleges, they were helping him out just as much, getting back into the sport he loves.