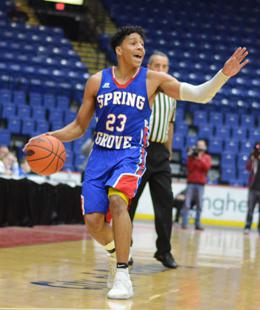 Eli Brooks (above) saw his tremendous Spring Grove career come to an end on Sunday. Up next is Michigan. (Photo: Josh Verlin/CoBL)

READING — Even as Eli Brooks sat uncomfortably on his team’s bench Sunday night at chilly Santander Arena, the final 93 seconds of his superb Spring Grove basketball career ticking away, not once did the 18-year-old bow his head in disappointment.

And while a string of disappointing thoughts had to be racing through his mind several minutes later as he stood in the middle of Santander’s emptying expanse — as quickly as one of his flashy drives to the tin — Brooks didn’t waver during the post-game wrap.

Heck, why should he?

Although Brooks put the finishing touches on his splendid high school career during a 71-46 loss to PIAA Class 5A hammer Archbishop Wood, the 6-1, 165-pound youngster took a predictable turn as he spoke following his final game in a Rockets uniform.

“Just with the personnel we had, we don’t match up with a lot of teams,” said the remarkably personable Brooks, who pocketed 16 points, grabbed 12 boards and dished out four assists despite playing on a tender right ankle he’d bumped up several days before. “We just bought into playing tough and playing together and that showed.

“We just got away from what we do a little bit in the second half, but it’s tough to play a team that has that many people they can run at you.”

For those familiar with Brooks’ humble demeanor, the number of times he tossed out we would hardly be termed a surprise — even though his well-rounded skill set and the flash he shows whenever he’s playing would largely suggest otherwise.

Yet when Brooks sat down with 1:33 to play following a timeout — his father, Jame Brooks, has been Spring Grove’s basketball coach throughout his youngest son’s varsity career — there would not be a curtain call ostensibly to draw praise from those seats.

That would come later, when Brooks and his teammates gathered for a photo underneath the basket in front of their bench. A standing ovation, celebrating each and every Rockets player, came from those who’d watched longingly while hoping for one more state-level contest to keep the energy flowing in the western York County burg.

Even as fans wandered on to the floor to greet Brooks and hand him plastic bags filled with sugary candies, he greeted everyone warmly. Once his post-game duties came to an end, he bounced over to those who had been seated near his mother, Kelly, offering them all sorts of platitudes and gratitudes.

It’s just the way Brooks is.

Following games at home in Spring Grove’s spacious gymnasium, a smiling Brooks greeted those young, old and in between, thanking those who’d attended the game for being a big part of the reason why the Rockets had been so successful.

“I took some time just to think about how much Spring Grove changed basketball-wise, probably last week,” Brooks admitted. “Just remembering going to games my seventh-grade year and remembering what happened then to what we brought back now.

“It’s been amazing to see all the support and excitement throughout the youth [and everyone else], so it’s been great.”

What brought out the fans — many of whom recalled fervently cheering for a remarkably successful program piloted by the late Bob Garrett or the younger crowd that simply idolizes Brooks and his teammates — was the Rockets themselves.

While the upward crescendo took some time to materialize during Brooks’ freshman season and James Brooks’ first year on the sideline, what followed for a once-proud program that won little for several decades was nothing short of amazing.

And Brooks, reluctant star or whatever, was in the middle of everything.

* Last season, the Rockets captured their first YAIAA championship in some 40 years before a packed house at York College’s Grumbacher Center.

* Spring Grove landed its first two berths in the PIAA’s postseason tournament each of the past two seasons, bowing out in the opening round last year before defeating West Scranton and East Stroudsburg North before falling to Wood.

* The Rockets totaled 47 victories, 25 a season ago and 22 this time around, in Brooks’ final two campaigns in blue and white.

* An all-state selection following his junior season — and a tremendous bet to be on the Class 5A team that will be announced in a few weeks — Brooks finished his career as the Rockets’ all-time leading scorer (2,426) and No. 2 in York County history.

* And while Brooks will follow former Rockets such as Spike Welsh (Richmond) and Randy Cozzens (Army) into the Division I ranks, he’ll do with much more fanfare when he suits up for a University of Michigan program still battling for a national title.

Fanfare and noise generated by others, not by the multi-talented backcourt standout.

Brooks was asked about the gaudy numbers on Sunday, but he was much more pleased about adding elements to his game as his body continued to mature. He also was happy to talk about the new ground the Rockets broke during his four-season career.

“That’s the biggest thing,” a grinning Brooks replied. “Just being able to say we did these things, especially 10-15 years from now when we’ll be remembered for all the firsts that we’ve accomplished at Spring Grove.”

“That’s been my speaking point to these guys for a while,” James Brooks concurred. “I told them we have done things, you guys have put your name and stamped it on things that no one can ever take away from you. It’ll be 20 years from now and people will be saying, ‘Who’s the team that went the furthest in the states ever?’

“These kids are gonna remember these things. It’s stuff they’re going to tell their kids and their grandkids and look back fondly on. … I’m just excited.”

“Once the buzzer sounded, I went over and said, ‘Thank you for all you did for me,’ Eli Brooks admitted. “We’ll definitely have a good dinner tonight and sit down and talk about it, but it’s been great at Spring Grove.

“That’s what drove me the most,” Eli Brooks continued. “Just having his support and trying just to build my own name.”

“This game, the end of it, doesn’t damper me at all,” said James Brooks, who received a tap on the posterior from his son as he stood outside Spring Grove’s dressing room. “I told my players I’ll do what I always do: I’ll probably have a bowl of ice cream, go to sleep, wake up tomorrow and I’ll go to work. When I look back at it, I’ll enjoy it.”

“It’s always a great thing when you’re able to closely affect your son’s path and that it’s turned out to be a good path,” James Brooks added. “I’ll be selfish and take a little bit of credit for it, but he’s such a top-notch kid that there’s not much you have to do.”

And while Eli Brooks certainly built his name at Spring Grove — and will continue to do so once he arrives in June at the University of Michigan — he’s simply another part of a Spring Grove family legacy initiated by his late maternal grandfather, Joe Johnston.

Not only was Johnston the founder of the Rockets’ football and wrestling programs, he fronted those clubs at the same time Garrett was piloting Spring Grove’s hoops teams.

Undoubtedly, they were watching from their blue-and-white seats in the afterlife, cheering loudly with other former Spring Grove faculty members and coaches as Brooks & Co. valiantly tried to add yet another line to their historic story.

James Brooks revealed parts of a conversation he had with one of Wood’s assistant coaches, a chat highlighted by his son’s production and on-floor efforts: “When you know Spring Grove comes in and No. 23 gets on the court, you know where the points have to come from to make it be a successful game for us.”

For four thrilling seasons, many of those points came from Eli Brooks as a dormant Spring Grove program was rejuvenated and its basketball-happy residents returned to the games in droves. Dozens of wins and an assortment of firsts also followed.

While they’ll replay the memories over and over, that’s all they can do until the personable 6-1 youngster with the basketball gifts and blue-collar approach starts creating more and more thrills … as a Michigan Wolverine.

“I remember going to the games, even when they weren’t good, selling out the [old] high school with the big bleachers back there,” Eli Brooks said. “Spring Grove wasn’t always a basketball town [during my lifetime], but it’s good to see it back.”