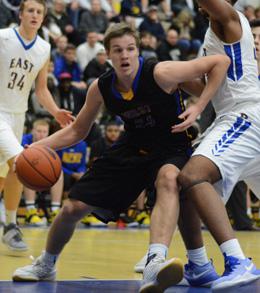 George Gordon (above, in Jan.) and Downingtown West are back in the PIAA state playoffs. (Photo: Josh Verlin/CoBL)

After coming up just short from a state playoff berth in his junior season, Downingtown West senior George Gordon and the Whippets were out for redemption Tuesday night.

Twenty-two points and seven rebounds later, Gordon and Downingtown West redeemed themselves from last year’s playoff disappointment, clinching a spot in the state playoffs for the second time in three seasons, beating Spring-Ford 70-64.

It’s the first trip to states since 2015, Gordon’s sophomore year. The Whippets senior forward, who is headed to Ursinus next season, is the last rotation player remaining from that team.

Last season, Downingtown West was just one game away from states, before suffering home losses to both Conestoga and Academy Park, leaving the Whippets with a sour taste in their mouths.

“Last year we lost to Academy Park in a heartbreaker at home, but going to states feels amazing,” Gordon said.

Former head coach Jason Ritter was gone, Stuart Ross was now in charge, and some growing pains were expected with a team trying to replace three very accomplished seniors.

Losing Ryan Betley (Penn), Josh Warren (Cornell), and Dom Guerrera (West Chester) to graduation, Ross had his work cut out for him. There were plenty of struggles early on in the season -- senior guard Pat Kennedy tearing his ACL in the fall didn’t help -- but the Whippets have found their groove at the right time.

After starting the season 2-4, and finding themselves at just 7-7 on January 14, the Whippets have flipped the switch, winning 10 of their last 12, with the only losses coming to neighboring rivals Coatesville.

“We grew as a team, and we had a difficult start to the season,” Gordon said. “Even though we’ve had some roller coaster moments this season, our coaches really pulled us through.”

The slow start may have cost them a spot in the Ches-Mont playoffs, but now the Whippets are rolling, right into the state playoffs after back to back elimination game wins over Hatboro-Horsham and Spring-Ford.

“Those losses early in the season hurt us in the Ches-Mont but now we’re right where we want to be now,” Gordon said.

“In the beginning, it was obviously going to be a transition from the old staff to the new staff,” Ross admitted.

After having won 50 games in two years under Ritter, and earning a state playoff appearance, this new Whippets coaching staff and team wanted to prove themselves by replicating that success.

Using their size advantage, West dominated the interior against a smaller Spring-Ford team, out-rebounding the Rams 37-20.

“We expect that night in and night out, 9 times out of 10 we’re going to be the bigger team, we preach to rebound and defend,” Ross said.

Junior wing Greg Barton scored 15 points and added 11 rebounds, including nine in the first half as the Rams seemed to consistently allow second-chance baskets.

Despite having won the first meeting 66-55 back on December 17, Spring-Ford came out sluggish, a problem the Rams have faced far too often this season.

West jumped out to an early 22-14 lead on the back of hot shooting from Davis Reardon and strong interior play from Gordon. Despite turnover issues all night, Reardon and Gordon both had eight first half points, while the Spring-Ford offense sputtered into the break.

The Rams were just 7-of-24 from the field in the opening 16 minutes, most of those shots contested by a feisty Whippets’ defense.

Once the Downingtown lead had ballooned to 35-23, Rams head coach Chris Talley had no other choice but to extend the defense to full court, using a press to wreak havoc on the Whippets’ back court.

The Rams came storming back, and when Ryan Fitzpatrick hit a three to open the fourth to give Spring-Ford its first lead since the opening minutes at 47-46, the tide seemed to have turned.

“They came out and pressed us and we were rattled by it and we had to figure it out,” Gordon said.

Despite 21 turnovers, most coming against the second half press, the Whippets were huge at both ends of the floor in the final moments, forcing multiple turnovers on Spring-Ford and making 8-of-9 from the line in the fourth.

Leading 62-59 with just over a minute left, it was Reardon who nailed a mid-range pullup jump shot off the dribble, confidently sinking Spring-Ford’s hopes of a third state appearance in four seasons.

“In the first half, we had no sense of urgency, no energy,” Talley said. “We knew what was at stake and we just didn’t execute.”

Fitzpatrick scored 22 points for the Rams, including 14 in the final quarter, but the Rams simply had too many costly mistakes in the final possessions of the game.

“You’ve got to value the possession, you’ve got to know the time and the situation, and I’m sure a couple of guys would like to have a few of those plays back,” Talley said.

When West needed a basket to keep pace with the surging Rams offense in the fourth quarter, they got it.

When they needed to force a turnover, they did.

After having come so close to states last season, the Whippets weren’t letting this one slip through their fingers yet again.

Unlike last season, the Whippets find themselves playing their best basketball as they come down the homestretch.

And that’s just how Ross likes it.

“We want to be playing our best basketball at the end of the season,” he said.