The eight teams left in the District 1 5A bracket aren’t quite safe yet.

Only seven of those left in the district’s second-largest classification will advance onto the PIAA Class 5A Tournament, meaning whoever loses three consecutive games from this point out is done for the season.

Here’s a look at each of the quarterfinal matchups, which take place on Saturday at 7 PM (unless otherwise noted): 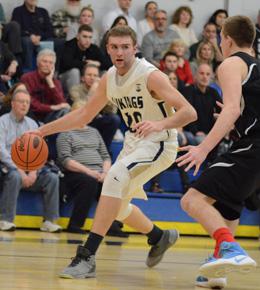 Ethan Miller (above) and Upper Merion will match up with a similarly-sized Chester frontline. (Photo: Josh Verlin/CoBL)

1) Chester vs. 8) Upper Merion
Upper Moreland put up a good fight against the top seeded Clippers, but Chester proved too strong as they ended up with a 16-point win. Larry Yarbray and Co. now turn their attention to Upper Merion, which survived a tough battle from Strath Haven in the first round to win its first district playoff game since 2005. The interior battle will be fun to watch in this one, as Jordan Camper (6-7) and Jamar Sudan (6-6) go to battle against the Vikings’ interior duo of Matt Faw (6-8 Holy Cross commit) and Ethan Miller (6-6), who combined for 34 points in the win over Haven.

On the exterior, the Vikings will have to control the pace by limiting the Clippers’ ability to run the open floor. Chester speedsters Larry Yarbray Jr. and Ahrod Carter will look to get out and run, and it will be up to experienced guards Aidan Newell and Andrew Persaud to limit turnovers, and knock down threes. Now fully healthy, with a team of 12 seniors, the Vikings may just be peaking at the right time. The Clippers, with their long history of division and state titles, present a tall order, but Upper Merion has the talent and experience to compete with the No. 1 seed in 5A.

4) Bishop Shanahan vs. 5) West Chester Rustin (1 PM)
It’s a Ches-Mont battle, as the American division runner-up (Rustin) visits the National division second-place finisher (Shanahan) for the first meeting this year between the two. The visiting Golden Knights (16-8) lost three of five games heading into the district playoffs, but bounced back to down Glen Mills in the district opener on Tuesday night, giving them an extra day’s rest heading into Saturday afternoon. Shanahan, which had won 11 of 12 games before an overtime loss to Coatesville in the Ches-Mont championship, took out its frustrations on Academy Park, winning 59-39 in the first round.

Both teams have some impressive size and ability in the frontcourt. Rustin head coach Keith Cochran has at his disposal two of Chester County’s best sophomores, 6-6 Jake Nelson and 6-5 Tajir Asparagus, who both missed time near the end of the season with sprained ankles but are both back to full health. Asparagus had 16 points in the first-round win, while Nelson battled back from a tough offensive night to come up with a game-sealing block in the final minute; senior Brandon Frazier dropped 25 against the Battling Bulls. Shanahan (18-7) counters with a pair of juniors, Kevin Dodds (6-6) and Thomas Ford (6-4), while junior guard David Angelo and senior Danny Browne do the majority of the perimeter damage. But whichever of those two frontcourt duos has the stronger game should go a long way towards dictating momentum. 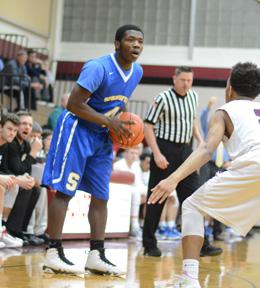 2) Great Valley vs. 10) Springfield (Delco.)
Fresh off a trip to Northeast Philly to take down last year’s District 1 AAA champion Holy Ghost Prep, Springfield heads up to Malvern to take on a Great Valley group which, coming off a terrific regular season, only got stronger heading into the playoffs. The Patriots (19-6) won the Ches-Mont American division title, going 11-1 in league play, despite playing without talented sophomore Alex Capitano, who missed two months with a broken hand suffered in December. Now Capitano, a 6-4 sophomore, is back and playing well, dropping 16 points in the opening-round win over Upper Perkiomen, including knocking down all eight of his foul shot attempts. Capitano’s return helps spread the floor for Great Valley’s shooters like Liam Ward, J.J. Long and Matt Porreca and forward Nate Graeff.

Springfield (14-9) got an infusion of talent of its own, when junior guard Mike Webb moved into the district and was granted eligibility shortly before the new year. The quick 5-9 guard has provided another scoring option for head coach Kevin McCormick, who already had a reliable senior in Kyle Sullivan as a go-to bucket getter, plus an intriguing interior duo of seniors Jordan Collins and Great Orjih. With a rotation full of juniors and seniors, Springfield has the experience and confidence to keep things rolling on the road and get to Temple. If Great Valley can keep this game in the 40s, the slow tempo favors the Patriots; a track meet benefits the high-scoring Cougars.

3) Penncrest vs. 11) Wissahickon
The Lions come into this game off a close revenge win over Harriton on Wednesday night, and will look to their leading scorer, junior guard Tyler Norwood to produce yet again. Norwood is very tough to stay in front of, and can shoot it from the parking lot off the dribble. Fellow seniors Mike Mallon and Justin Ross will be key for the Lions to provide auxiliary scoring to Norwood. Norwood and Ross combined for 37 of the Lions 51 in their opening-round win. Mike Doyle’s group has experience making the state tournament, qualifying in 2010 and 2015, but this year’s Penncrest squad is trying to make its own legacy in the new 5A bracket.

Wissahickon enters this second round affair off an impressive upset win at Phoenixville, a game they controlled throughout thanks to dynamic offense from senior Shane Ford and junior Zach Reiner. The pair scored 20 and 17 respectively, and Ford showed his ability to score both inside and out for the Trojans, with Reiner controlling the interior. Chaz Owens, a 6-3 junior wing guard who also features in the Trojans lineup, can provide additional scoring as he showed Wednesday with 12 points. Neither team has a ton of size, but the Trojans might have a slight advantage in that category across the board; if Wissahickon can’t slow down Norwood, though, it might not matter.