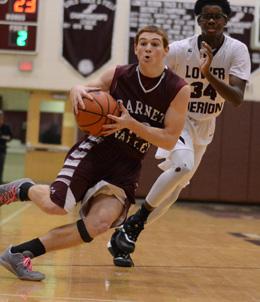 CONCORD — Cole Palis knew he that there was a chance that he’d be the guy to take the shot.

A tie game that’s in overtime isn’t the usual setting for sophomores to be stepping up, but Palis noticed that Ridley had been sending help defense to Garnet Valley sharpshooter Austin Laughlin all night. The Jaguars set up a pick and roll for Laughlin, and true to form, the Green Raiders sent an extra defender his way, which meant a wide-open Palis.

He cooly drilled the 3-pointer with 39.4 seconds to go, Brandon Starr added a late free throw and Ridley settled for a 2-pointer instead of the long ball to cement Garnet Valley’s 61-60 overtime win.

If Ridley can't bounce back on Thursday with a win over Upper Darby, that more than likely seals its fate on the outside of the District 1 6A tournament. They were in the final qualification spot (No. 24) in the latest update on Monday, but several teams below them still have opportunities to jump them with wins.

Reminded of that, senior Jacob Buttermore broke into an ear-to-ear smile. He’s had his battles with the Green Raiders as a star football and lacrosse players, so beating Ridley at anything is always a good thing for him.

“This is my first year of varsity basketball, so beating them and knocking them out of playoff contention is pretty cool,” Buttermore said.

That wouldn’t have been possible without Palis’ big shot. Brandon Starr got the ball rolling by drawing a double team, then dumping it off to Laughlin. Laughlin then drew a double of his own before finding Palis, who uncorked a perfect shot that had the Garnet Valley (14-7, 9-6 Central League) bench celebrating before it even went in.

“It was all my teammates,” Palis said. “My guy helped out, and (Laughlin made a) perfect pass. I set my feet and I made it. It’s great. I’m just a young guy trying to contribute. They’re all great and they’re going to go somewhere to play and make an impact in college. I’m just trying to make their Senior Night great.”

The Jaguars’ two-man senior class of Laughlin (23 points, three rebounds, two assists) and Buttermore (seven points and three rebounds) made its presence felt, but so did Garnet Valley’s underclassmen. Palis, Danny Guy, Brandon Starr and Connor O’Brien joined the seniors as part of a six-man group of players that hit at least one 3-pointer in a 3-point barrage from both teams. They had to be good to cancel out Damir Fleming’s explosive 24-point night that included a pair of threes of his own.

Starr got the overtime scoring festivities started with an and-1 a minute in, but Fleming hit a pair of free throws and Jim Bramwell hit a long two from the top of the key. Unfazed, Paris came through with his big shot and Garnet Valley never looked back.

“We’ve been in that situation, maybe or five times this season,” Buttermore explained. “Coach (Mike) Brown tells us to stay calm and do what we do.”

It’s a bit jarring to not see Ridley among the playoff names, but Green Raiders coach Mike Snyder knew he’d have his work cut out for him this season. An inexperienced roster meant a team that would see its share of growing pains. Few could have forecasted that many, though.

“We lost a ton of close games this year. We lost seven games by less than four. You flip three of those and you’re sitting at 13, 14 wins,” Snyder said. “You go down the list. We’ve lost a lot of close games and we’re just not making enough plays to win the close ones. That’s what it comes down to.”

Take the final play for example. The Green Raiders knew they needed a 3-pointer and drew it up as such. The execution, though, wasn't there and they took a meaningless 2-pointer to end the game.

“We had a play designed for a 3 and we said, ‘here’s where all of the 3-point shooters are going to be.’ You can’t shoot a two, obviously,” Snyder said. “We designed it and everyone was in the right spots, but you can’t shoot a 2-pointer when you’re down three. I don’t really have an explanation for that.”

If the past is any indicator, though, Snyder will have the Green Raiders back in the playoffs in no time. The present, though, belongs to Garnet Valley.