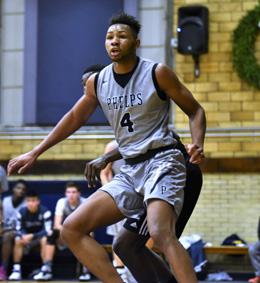 This past summer, Tim Perry Jr.’s recruitment stood at a crossroads.

The big man didn’t have any offers on the table after graduating from Cherry Hill East in June. As a result, he decided he needed to spend an additional year as a post-graduate at the Phelps School in order to improve his recruiting stock.

Finally, in late December, Drexel invited the son of former Temple star and NBA player Tim Perry Sr. for a visit, and while he was on campus, decided to give him that long-awaited scholarship offer.

It only took a few weeks, but on Wednesday, Perry wasn’t waiting any longer. He was committing to the Dragons.

Perry has long been considered a potential Division I prospect with a high-ceiling. His blend of length and athletic ability, particularly for someone of his stature, has always made him a capable rim protector.

Shanahan, himself a former Temple player, was thrilled at the news of Perry’s commitment, and praised not just his play on the court, but more so his attitude and approach to his post-grad year.

“There’s two types of post-grads: those who have to be, and those who want to be," Shanahan said. "Timmy is one of those who want to be. He’s a very disciplined and self motivated kid. He’s up at 6 AM to lift, he’s working out. He’s practicing like a sponge, trying to learn more and more about the game of basketball. He wants to be good.”

Perry Jr. had received interest from several schools in the region, including Temple and La Salle, although Drexel was the only one who extended a scholarship offer. Shanahan did note however, that Perry likely would have received several more offers had Perry waited until the spring.

Though he is still on the unpolished side, especially on the offensive end, he started to show signs of putting things together recently.

“Big guys just develop differently. We just expect them to be great players because their big,” he said. “It’s just like how you make pork, you slow cook it in the crock pot. You have to get them to develop. People find it on their own at different times. I think Timmy’s just starting to find it right now.”

He had a strong summer showing for Tim Legler’s South Jersey Jazz team on the AAU circuit, catching the eye of the new Drexel staff. He looked much more comfortable on the court, while scoring and rebounding the ball with much more consistency than he had previously.

His recruitment does bear some resemblance to that of his father, a not-so-highly rated recruit from Freehold (N.J.) who arrived at Temple as a freshman in 1984 as a “project” himself. Perry graduated Temple as the Owls’ all-time leader in blocked shots and field goal percentage, and was drafted 7th overall by the Phoenix Suns in the 1988 NBA Draft.

“I think he could have the same type of success big Tim had playing in the city. His first year was not the best year for him. As he developed, he had an unbelievable career and was able to make money playing basketball,” Shanahan said. “Hopefully Timmy Perry Jr. can have that type of career.”

Perry Jr. had a significant amount of success for East, starring for two New Jersey Group 4 Sectional championship teams as a sophomore and junior. In his final season at Cherry Hill East, he averaged 12.9 ppg, as he led his team to the second round of sectionals, succumbing to Eastern in a close game.

Interestingly enough, Perry will be attending a University City school just like his former point guard at East -- Jake Silpe -- who is now a sophomore at Penn.

With Drexel’s frontcourt losing both Rodney Williams and Mohamed Bah to graduation next season, Perry could have a chance to earn some significant minutes in Spiker’s rotation.

Perry joins versatile forward Jarvis Doles who is doing a post-grad year at Mt. Zion Prep (Md.), who signed his letter of intent in November during the early signing period, as the two members of the Dragons 2017 class.