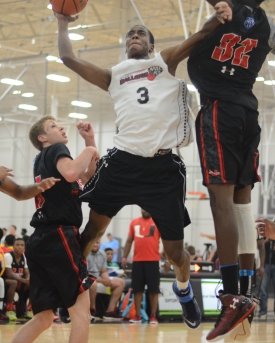 Jalen Gabbidon (above) commited to Yale on a visit to the New Haven, Conn. school this past weekend. (Photo: Josh Verlin/CoBL)

Pennsylvania’s leading scorer from the 2015-2016 season has announced that he will be continuing his athletic and academic career at Yale University.

Jalen Gabbidon, who averaged 37.2 points per game as a junior at Harrisburg Academy and will be finishing his high school career at Glenelg Country School (Md.), made his decision following a visit to the school on Saturday.

“It feels great. It’s a big weight off my back, that’s what it feels like,” Gabbidon told CoBL by phone on Sunday. “I was actually down on campus yesterday to hang out with some of the guys. They have a camp going on so I went down yesterday and I committed then, so it’s just a great feeling.”

The 6-foot-4 inch wing, who is a prolific scorer and ball-handler, chose Yale over Lafayette, Lehigh, Columbia and Holy Cross, among many other schools in the Patriot and Ivy Leagues.

The presence of James Jones, who will be going into his 18th season as Yale’s head coach and has been named Ivy League Coach of the Year in each of the last two seasons, was what put Yale over the top.

“Coach Jones, he was a big factor,” Gabbidon said. “He’s a great coach and I believe in him. I watched a lot of their games this year, I’ve talked to him about some of the games they played so I agree with a lot of the philosophies and the way he does things and he also runs a great program so I have no worries.”

Although having postseason success is a plus, it’s Yale’s attitude that suck out most to the rising senior.

Although he wasn’t always sure if basketball would be in his future or not, there is one thing Gabbidon knew he wanted to be a part of from the start, and that was a high-academic institution.

*[His brother, Jini, will be a sophomore on the basketball team in the fall.]

Getting the opportunity to be able to combine top notch academics, along with a basketball program that is fresh off 23-7 season along with an NCAA tournament upset win over Baylor, was an opportunity that Gabbidon couldn’t pass up.

“It’s a little surreal,” he said. “I’m able to go to one of the best academic institutions in the world and go somewhere where they just won an NCAA tournament game. It’s incredible, it’s the best of both worlds. There’s no better combination than Yale.”

Although it’s his basketball and academic talents that have brought him to where he is, Gabbidon acknowledged that he wouldn’t be where he is today without the help of some special individuals.

“I always like to give thanks to my AAU coach (Pat McGlynn) and my teammates,” said Gabbidon. “And especially to my parents (Monica and Shaun Gabbidon) and my uncle (Ian Gabbidon). My parents and my uncle are the ones who always travel with me thousands of miles and all that stuff.”

As for what lies ahead this season, Gabbidon will look to improve upon his already impressive high school career.

“My goal is to go and be a winner. I play to win,” he said. “I’m going to Maryland to work on my game and help them win the conference championship. That’s the goal they set out to do and that’s a challenge. I know that if we’re able to win the conference, then that means I’m improving. I know I have to get better. I think it’s a good segue before heading off to college.”