The Basketball Tournament’s 64-team field is down to 16, with each squad now just four wins away from collecting a $2 million payout.

The four teams left from each region head to Philadelphia this week, for the Super 16 round on Thursday and Friday to be followed by Saturday’s quarterfinals; all of the action will take place at Philadelphia University.

TBT’s field is stocked by former college stars and even a few longtime NBA pros; here’s a look at the eight Thursday/Friday matchups and who you can see at Philly U later this week:

1) City of Gods vs. 5) Team F.O.E.
When: July 21, 4:00 PM
Watch: ESPN3
Who: City of Gods will look to get one step closer to repeating as Northeast Regional champions when the D.C. natives take on Team F.O.E., which has been paced thus far by Maalik Wayns (Villanova) and Tyshawn Taylor (Kansas). Marcus and Markieff Morris, Kansas alums who hail from Philadelphia, serve as Team F.O.E.’s coaching staff, and will have their hands full planning for City of Gods’ size; Dermarr Johnson, James Gist and Pops Mensah-Bonsu, all listed at 6-foot-9, serve as quite the formidable frontcourt. Johnson, who has led City of Gods in both of their games so far, spent seven seasons in the NBA between Atlanta, New York, Denver and San Antonio. Mensah-Bonsu also spent some time in the pros, with stints in Dallas, San Antonio, Houston, and New Orleans, before spending 2013-2014 overseas. 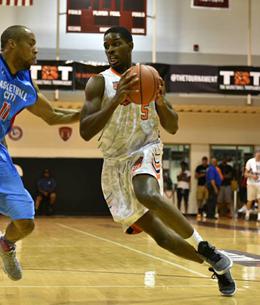 C.J. Fair (above) and Boeheim's Army have a Big East matchup against the Pitt alums of The Untouchables on Thursday night. (Photo: Mark Jordan/CoBL)

2) Boeheim’s Army vs. 3) The Untouchables
When: July 21, 7:00 PM
Watch: ESPN2
Who: It’s an old-fashioned Big East battle, as the Syracuse alumni and the Pitt alumni do battle in a game that could be the biggest draw of any in Philly this week. When most of The Untouchables’ players -- such as Levance Fields, Gil Brown, Gary McGhee and Brad Wanamaker -- were in Panthers uniforms, they had Syracuse’s number, but this matchup should be just as exciting as any old Big East classic. Boeheim’s Army, which features locals like Hakim Warrick and Rick Jackson, has exercised its opportunity to add an extra player for this weekend, known as a Ringer, which will be kept secret until game time. A source within TBT tells CoBL it will be one of four players: Trevor Cooney, Gerry McNamara, James Southerland or Kris Joseph.

Midwest Region
5) Pedro’s Posse vs. 9) Always a Brave
When: July 22, 9:00 PM
Watch: ESPN2
Who: Pedro’s Posse boasts the best backcourt in the whole tournament, at least when it comes to resumes. Mike Bibby and Jason Williams have a combined 26 years’ experience in the NBA, and though both retired around five years ago, they’ll still be one of the biggest draws for as long as Pedro’s Posse remains alive. Bibby, the No. 2 pick out of Arizona in 1998, had a 14-year career spent half with Sacramento (2001-08) and the rest with Atlanta, Vancouver, New York, Miami and Washington; he’s 45th in the league’s career assist leaders (5,517). Williams, known as “White Chocolate,” was one of the most entertaining passers in the league from 1998-2011, winning an NBA championship in 2006 with the Miami Heat. It’ll be up to a group of Bradley alums who have the task of taking them down, following a crazy comeback in the second round: the Braves were down 77-72 with seven seconds left before a 3-pointer by Jeremy Crouch and steal-and-triple by Tony Bennett delivered the shocking win.

6) Golden Eagles Alumni vs. 7) Armored Athlete
When: July 22, 7:00 PM
Watch: ESPN2
Who: The Marquette alumni, who rolled past the Spartan Heroes (Michigan State alumni) to punch their ticket to Philadelphia, feature many names that should be recognizable to college basketball fans--particularly those of the Big East--like Darius Johnson-Odom and Dwight Buycks. As for their opponents, Armored Athlete, a trio of recent Indiana graduates--Christian Watford, Jordan Hulls, and Will Sheehey--highlights the roster for a team that won both its first two games by a comfortable combined 61 points. While Sheehey and Hulls currently play overseas, Watford has spent the last two years working through the NBA D-League; he has bounced around to multiple organizations since going undrafted in 2013.

West Region
1) Team 23 vs. 5) Team Colorado
When: July 22, 2:00 PM
Watch: ESPN3
Who: Team 23, last year’s TBT runner up, was led by Frank Gaines’ 30 points in its second-round win. Gaines, an IPFW graduate, is joined by center Gavin Edwards (UConn), D.J. Strawberry (Maryland) and Davin White (an 11-year pro). After winning their first two games by a combined 53 points, the going is about to get much tougher. Team Colorado, appropriately, is made up of nearly all University of Colorado alums. Marcus Hall, who scored 1,178 points in his four years at Colorado between 2003-08, led Team Colorado with a 31-point performance in a second-round win. Richard Roby (2004-08), a 2000-point scorer in college who also averaged 5.5 rpg, chipped in 23 points.

3) Few Good Men vs. 7) Team Utah
When: July 22, 4:00 PM
Watch: ESPN3
Who: A Few Good Men, who all played for Mark Few at Gonzaga, had the most lopsided second-round win, beating 7outz 98-54. The team features notable former Zags Micah Downs, Austin Daye and Jeremy Pargo. Team Utah (Utah alums) will be out to avenge the latest Utes team, which was knocked out of the 2016 NCAA Tournament by the 11th-seeded Zags. Team Utah is led by Justin Hawkins, who played two years at Utah (2003-05) before scoring more than 1000 points in two years at New Mexico State, and Terrance Drisdom, who went to Cal Poly Pomona and has played in the D-League.

South Region
5) TMD vs. 8) Trained to Go
When: July 21, 2:00 PM
Watch: ESPN3
Who: Any college basketball fan should remember Marshall Henderson, the boisterous and electric Ole Miss 2014 graduate who made highlight reels and headlines throughout his two years as a Rebel. Henderson, a Sacramento Kings affiliate who currently plays in the D-League for the Reno Bighorns, leads TMD into the Super 16 against Trained to Go, which sealed its spot in Thursday’s game with a thrilling, 83-82 upset win over the top-seeded Memphis Alumni, Bluff City Blues, with Brandon Robinson--an alum of Clayton State (D-II) who has bounced between professional teams in Germany and Canada--hitting two threes in 11 seconds to down the regional favorites.

2) Overseas Elite vs. 3) Ram Nation
When: July 21, 9:00 PM
Watch: ESPN2
Who: The defending TBT champions, Overseas Elite, feature a band of Division I alums who currently play professional ball in Europe, such as Myck Kabongo (Texas) and Todd O’Brien (St. Joe’s). Given the No. 2 seed in the South Bracket, they’ve looked far from dominant thus far, winning their second-round game by just seven points over HBD. Their Super 16 matchup, Ram Nation, is comprised of alumni from VCU, including names like Brad Burgess and Jamie Skeen that led the Rams to the Final Four in 2011. Burgess is currently playing professionally in Austria. According to Ram Nation’s twitter, alums of the VCU pep band will be making the trip to Philly U to provide some homecourt flavor and create a college basketball atmosphere, expect their tremendous traveling fanbase to do the same.