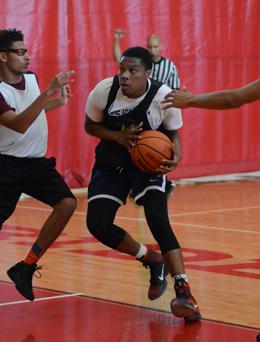 Devin Hill (above) and Valley Forge were one of 24 programs to participate in Saturday's Delco Shootout at Penncrest. (Photo: Josh Verlin/CoBL)

Here’s a notebook from the Delco Shootout, hosted at Penncrest HS on Saturday:

Valley Forge picking up steam
There has been major progress for Valley Forge Military Academy’s basketball program over the last three years, and now the Trojans are ready to turn the corner.

The first year under head coach Francis Bowe, VFMA won six games, and last year they won 11. Bowe’s first year was in charge of a program without a conference or postseason berth; now they’re in the Bicentennial Athletic League’s Independence division and making district playoffs.

Now comes the next step: making it into the PIAA state tournament. Last year, Valley Forge was defeated by Church Farm in the District 1 Class AA semifinals, the team’s first postseason appearance. And that loss has only served as inspiration for the Trojans this offseason.

“Our kids have gotten bigger and stronger, they’re taking this like a job--and as a coach, it’s a dream,” said Bowe, who previously spent three years as Upper Merion’s head coach. “We tell them ‘here’s the workouts, here’s the program, we’ll get in the gym together,’ and they do it, they show up. I’ve been doing this 10 years as a coach and I’ve never had a team like this.”

With the PIAA’s reclassification, Valley Forge finds itself now a AAA school, which will also bring about new district opponents; with only three District 1 AAA schools (VFMA, Devon Prep, New Hope), they’ll combine with five teams out of District 11 for an eight-team playoff with the two finalists qualifying for states.

The Trojans’ ceiling will likely be determined by the development of 6-foot-10 rising junior Abraham Deng, a raw-but-athletic post player whose size alone helps VFMA stand out from every team in the league besides Church Farm.

But what will certainly provide a big boost this year is the arrival of point guard Devin Hill from Delco Christian, allowing Bowe to ease the pressure on another rising senior, Myles Bunyon, the team’s only true point guard a year ago. 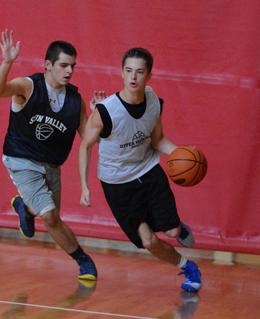 Ryan Coyle (right) will be in his third year as a starter for Upper Moreland. (Photo: Josh Verlin/CoBL)

Upper Moreland banking on experience
Upper Moreland has finished in the bottom half of the Suburban One League’s American Conference each of the last six years, a 14-12 season in 2012-13 the only above-.500 mark in that span.

But with four out of five starters and eight of his top nine rotation players returning, Upper Moreland’s Matt Heiland has quite a few reasons to be optimistic that this is the year to buck that trend. And that showed with three wins on Saturday morning, coming over Oxford, Sun Valley and West Chester East -- not quite the same as playing P-W and Cheltenham in SOL play, but a good start nonetheless.

The only key cog to replace from a year ago is starting point guard Brendon O’Donnell, but Heiland is confident that rising junior Ryan Coyle, already a two-year starter, will slide right in.

“Coyle was a 2-to-1 assist-to-turnover ratio as our off guard, he had 75 assists and 35 turnovers,” Heiland said after the third win of the day. “Ryan played a shooting guard as a freshman, he played as our trail last year, so now he knows where everybody needs to be and he can be our floor general for the next two years.”

Around Coyle, Heiland has plenty of experienced perimeter pieces to work with. His second and third-leading scorers from a year ago, 6-5 Damian Washington and 6-4 Shane Stone, are both athletic wings; Washington was the team’s leading 3-point shooter a year ago, with 60 triples on the season.

“We count on him to be our best shooter, probably our best perimeter player and when he gets open looks, he has the capability to go,” Heiland said.

On Saturday, rising senior Casey Decker was also showing he can handle some of O’Donnell’s scoring load. The 6-3 guard, who also is the school’s starting quarterback in the fall, made several long-range shots and was a strong defender as well.

“Now as a senior coming up next year, we’re going to rely on him a little bit more,” Heiland said. “When he gets going, he can shoot the ball, he’s very confident.” 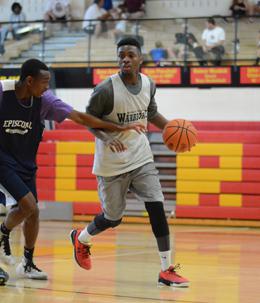 Steve Payne (above) is one of several promising 2019 prospects on Lower Merion's roster. (Photo: Josh Verlin/CoBL)

Lower Merion gets a glimpse of the future
For a myriad of reasons, Lower Merion was short-handed and inexperienced on Saturday. But some younger members of the Aces made the most of it.

With a roster that featured five rising sophomores and another few rising juniors, the Aces were one of the youngest teams on the floor at Penncrest. The Aces won only one of their three games, topping ANC in their opener before falling to Episcopal Academy by two and sustaining a lopsided loss to Hazleton.

“We want to put our guys in some tougher situations against strong competition and see how they respond,” Downer said. “The purpose of (Saturday) was to improve with the group we had. It was good to see how they reacted.”

One player who stood out for Lower Merion was rising sophomore Steve Payne. The 6-foot-1 guard was the Aces’ best scorer and was often able to create when Lower Merion needed some offense.

Though he’s only going to be a sophomore, there’s a chance Payne could take over as the Aces’ starting point guard in the 2016-17 campaign after K.J. Felton graduated.

“He’s a dynamic scorer,” Downer said of Payne. “He is young and he has some things to work on, but he’s someone we’re considering giving the ball to as the point guard of our offense. We’ll see how he continues to do leading up to the season.”

When he was a Tiger just more than a decade ago, he played baseball and football in addition to basketball. So now in his second month of being Marple Newtown’s head coach, he understands it’s tough to get a glimpse of what his full roster will look like come December.

“We’re trying to get in a routine and we’re continuing to lay out our philosophy of what the program is going to be like,” Spratt said. “But Marple is full of multi-sport athletes. So I know it’s going to be difficult to get a lot of guys together since some are either finishing up baseball season or getting set for football since it’s the next sport. We’re trying to communicate with as many kids as we can, though.”

Spratt, who was hired in early May, is back at Marple Newtown after spending the last three seasons as an assistant coach at Penncrest. In addition to being a player in high school, Spratt joined the Tigers’ coaching staff in the 2007-08 season when he was a student at West Chester.

Spratt’s roots run deep at Marple Newtown. And as people may recognize him or his name, he’s making an effort to re-introduce himself as the new leader of the Tigers’ basketball program.

“These first few months I just want to establish a solid reputation and set up where I want to take this program,” Spratt said. “I’m getting to know a lot of people and re-meeting people who I grew up around.” 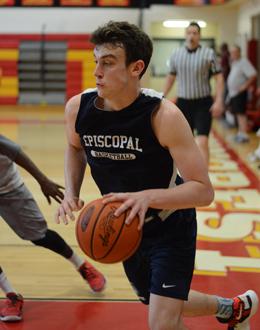 Episcopal's Nick Alikakos (above) had his perimeter game working for him on Saturday. (Photo: Josh Verlin/CoBL)

Quick Hits
-- Episcopal Academy 2017 Nick Alikakos showed off his improving jump-shooting abilities in a win over Lower Merion late in the morning sessions. The 6-7 forward, one of the top scorers in the from 15 feet and in over the last three years, knocked down two of his three 3-point attempts in the game, including drilling a corner three while getting fouled. Alikakos already has offers from Hartford, Lafayette and Penn, with a number of other mid-major programs tracking him to see how his game develops; if he shows that ability to knock down perimeter shots over the rest of the summer, look for several others to offer before he makes his decision.

--Bonner-Prendergast brought some serious size to the Penncrest court with the addition of 2018 PF Ajiri Johnson. Johnson was slated to go to Bonner last year but ended up at Putnam Science Academy (Conn.); now it looks like he’s coming back to Philly for his junior season. An athletic 6-8 forward, Johnson should provide an immediate boost to a somewhat-undersized Friars squad that could be a surprise team to watch in the Catholic League this year.

--Penncrest guard Tyler Norwood is in the midst of a strong offseason. The 2018 point guard has drawn some D-I interest after a successful April with the Jersey Shore Warriors. Norwood said he has heard from Bucknell and hopes to have more talks with Division I teams as the summer progresses. The rising junior put his skills on display in a game against Bonner-Prendergast, knocking in a handful of 3-pointers.