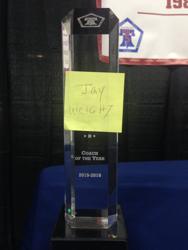 Phil Martelli thought another Big 5 coach was more deserving of the honor given to him on Monday night. (Photo: Stephen Pianovich/CoBL)

Phil Martelli was given the Big 5 Coach of the Year trophy on Monday night. That didn’t mean he wanted to take it.

Martelli, who just completed his 21st season as the head coach at Saint Joseph’s, started listing some regrettable moments in Philadelphia sports history during his acceptance turned rejection speech at the annual Big 5 Awards Banquet at the Palestra. He added one from 2016.

“Threw snowballs at Santa Claus; threw batteries at J.D. Drew; cheered when Michael Irvin when he got a concussion. And did not give Jay Wright the Coach of the Year the year he won the National Championship,” Martelli said to numerous laughs in front of a large crowd.

Getting the trophy for Philadelphia Coach of the Year is about the only thing Wright has not gotten his hands on lately after leading Villanova to its first National Title in 31 seasons last week against North Carolina. Wright was even named the Naismith Coach of the Year for the country’s top coaching job. But when the votes were tallied in Philly, Martelli came out on top.

To be fair, when the awards were voted on by the media prior to the start of the NCAA Tournament, there was no clear-cut choice. Yes, Wright had taken Villanova to the No. 1 spot in the polls, but Martelli and his Hawks had quite a turnaround and landed in the NCAA Tournament after getting picked to finish seventh in the Atlantic 10.

St. Joe’s finished 28-8 (the second-most wins in school history) and won the Atlantic 10 Tournament behind the conference player of the year, DeAndre’ Bembry. But then Villanova went on a six-game tear through the NCAA Tournament, and the decision became much more obvious in Martelli’s eyes.

“I told my wife three weeks ago (when the awards were announced), I can’t take it,” he recalled. “I cannot do this. Three weeks ago, she said ‘You take it, you did a good job.’ They beat Iowa, we lost to Oregon, she said ‘Maybe you should think about this.’ By the time they got through Louisville, she was like ‘I’m with you.’ ”

That wasn’t the only advice Martelli’s wife, Judy, gave him. She also told him to put Wright’s name on the trophy itself at the ceremony. She even wrote “Jay Wright” on a sticky note, which Martelli smacked on the trophy toward the end of his speech.

He congratulated Villanova on an outstanding season afterward and then walked back to his seat without taking the trophy.

Martelli also had more serious moments in his talk, thanking his assistants and pointing out a recent milestone achieved by Coaches vs. Cancer. But on a night in which five of the greatest Big 5 teams were honored, no speech drew more laughs than Martelli’s. Included in his speech/re-gifting/impromptu stand-up routine were:

-“Seriously, there’s not one person in here that would say ‘Big 5 Coach of the Year? It must be Phil Martelli! It’s not Jay Wright!’ ”

- “Jay, this is yours. I’m going to borrow it for an hour and if I can get into your gated community in Newtown Square, I’ll drop it off.”

- “If I was going to take this, I’d be like the little league kid who gets the participation trophy.”

Wright came to the podium just moments later to accept Villanova’s award for having the best Big 5 record. And while he didn’t acknowledge Martelli’s gesture his brief remarks, Wright didn’t take the trophy with him.

No, the award – in all likelihood – will end up in a St. Joe’s trophy case. But if Martelli has his say, that sticky note will stay on it.