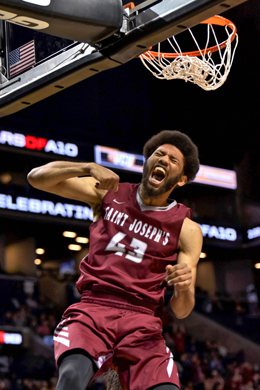 BROOKLYN – Phil Martelli climbed the ladder and before he could take the final snips of a net hanging off the rim by just a few threads, the coach gave a few slaps to the backboard, which was covered in a sign that read “Atlantic 10 Champions." He then looked out to the crowd of players, assistants and families with a smile.

Martelli is about moments – he said the word eight times in the opening statement of his postgame press conference – and this was the most meaningful one of the season and one of the most significant the coach has had in his 21 seasons leading Saint Joseph's.

The Hawks were cutting down the nets after putting on an offensive showcase in an 87-74 win over VCU for their second Atlantic 10 Tournament crown in three seasons. The victory gave St. Joe’s a guaranteed spot in the NCAA Tournament, where they were picked as a No. 8 seed and will face ninth-seeded Cincinnati in the first round on Friday in Spokane, Wash.

But St. Joe’s was likely going to be in the field of 68 despite whatever happened on Sunday at the Barclays Center. The win over the second-seeded Rams allows players on a team -- which Martelli has been praising as a cohesive unit long before the season began – to have a new label: Champion.

“Look, championships are forever, okay,” Martelli said afterward. “So whether they want to get tatted up or not get tatted up, they have a tattoo now. Every kid on that team, 2016 Atlantic 10 champions. That's their tattoo. That's theirs.

The on-court celebration was a long and emotion-packed one for the Hawks (27-7), who came to Brooklyn on the NCAA Tournament bubble and a two-game losing streak. Their first 20 minutes of basketball there did not go as planned, either, as they trailed George Washington by 14 points at halftime of their initial game.

But St. Joe’s had a potentially season-saving half of basketball on Fridday and followed it up with a pair strong all-around performances against the top two seeds in the conference to officially punch a ticket to college basketball’s coveted big dance.

On Sunday, the Hawks played what Martelli called “probably the best performance” of the season, and the box score would back that up.

St. Joe’s shot 64.8 percent from the floor for the game, and Isaiah Miles, DeAndre’ Bembry and Aaron Brown were all in double figures by halftime. The upperclassman trio combined to score 69 points – 30 from Bembry, 26 from Miles, who was named the tournament's Most Outstanding Player, and 13 more from Brown.

Brown, a senior who transferred from West Viriginia and is making his first trip to the NCAA Tournament as a member of the Hawks, said he was not surprised the team did not cool off after shooting 64.5 percent in the first half.

“We were out there just playing and enjoying the moment, and good things happened, as you can see,” Brown said.

Good things continued to happen early in the second half for the Hawks, who stretch their lead from nine points at halftime to 21 with less than nine minutes left.

But the game changed when senior forward Papa Ndao was assessed a double technical foul and ejected. Ndao, one of the standouts from Saturday’s semifinal win over Dayton, was called for a foul, given two technicals for angrily arguing with officials. In all, it gave VCU six free throws – five of which were made – and sparked a 19-6 run to get the Rams to within eight at 75-68 with just more than four minutes left.

And though the game got chippy (James Demery was part of a double technical foul for exchanging words after a jump ball), the Hawks never completely lost their composure or the lead.

Bembry scored five straight points with less than two-and-a-half minutes left. The last two came on a two-handed slam, which iced the game and got a great reaction from Bembry and the crowd. Minutes later the Hawks were hugging on the court as red, black and white balloons fell form the Barclays Center ceiling.

St. Joe's, which was picked to finish seventh in the A-10 before the season, left no doubts about its NCAA Tournament status. And they didn’t leave any nets on the rim, either.

“It's an amazing feeling,” Miles said. “I'm just happy for all the seniors being able to finish on top, and it's just like a senior's dream, finishing as high as you possibly can. I've been saying that all year, and finally all the work, all the summer work, everything paid off.”

Added Bembry, who was also the statistical leader of St. Joe’s last season during a 13-18 campaign: “Eighty percent of the guys that was on that team last year is on this team, so I'm happy to see that we went through the struggles together and now we're going through the highs together.”

The Hawks found out their tournament seeding at their lower Manhattan hotel on Sunday evening in a more subdued celebration.

Make no mistake, St. Joe’s is thrilled to be in the NCAA Tournament field. But when Martelli was asked what would be a better feeling, hearing his team’s named called during the selection show or cutting down the nets, he chose the latter without hesitation.

“There are 68 teams that are going to make the NCAA Tournament,” he said. “But there’s only one Atlantic 10 champion.”