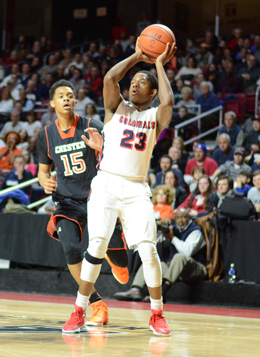 Ahmin Williams (shooting) was one of five P-W reserves who scored as the Colonials took home the District 1 AAAA championship. (Photo: Josh Verlin/CoBL)

Long before Plymouth-Whitemarsh started its road to becoming 2016 District 1 AAAA champions, it was clear the Colonials had several talented individuals on their team.

Even since summer workouts, some of the Colonials’ senior leaders like Rider commit Xzavier Malone and versatile big man Mike Lotito noticed there were multiple unheralded players that showed potential to be key to any success Plymouth-Whitemarsh hoped to have.

Naturally, almost every single one of the players that came to the floor for P-W had their shining moment in the biggest game of their careers to this point, as 10 different Colonials made their way onto the scoresheet in their 68-57 championship victory over the Chester Clippers.

“I can’t say enough about how great of a job my teammates did,” said Lotito, who fouled out with 4:11 left in the fourth quarter. “This is the ultimate high. We’ve worked so hard since November 17 officially and unofficially months before that, and for this all to come together is just so special, I can’t believe it.”

The most notable role-player to make a key statement was junior guard Matt Walker, who didn’t play a single minute of his sophomore season and saw little playing time during the current campaign.

When he came in for Lotito after the senior’s fourth foul, Walker scored his only three points of the game on a dagger corner three to pull P-W within one to start the fourth quarter; up to that point, they hadn’t led since the middle of the second frame.

Of course, it was just another basket for a guy who’s been taking that shot in practice for years.

“I knew since Mike had foul trouble, I had to be ready to get in the game,” he said.

That said, Walker didn’t deny that the moment was certainly a memorable one, coming up clutch in a critical situation for the Colonials.

Neither did Lotito, who obviously had to watch it all unfold from the sidelines. “Amazing” was the first exclamation out of his mouth when asked about the clutch play of his teammate.

“(Head coach Jim Donofrio) talks all the time about how you never give up, you accept role but you strive to increase and get better every day,” said Lotito. “Matt came in and hit probably the biggest three of the game.”

Also coming up big in a new-found role for P-W was 6-foot-9 freshman Naheem McLeod. He only had one shot attempt all game, but it came in yet another crucial moment; following a manic sequence of loose balls, he received a pass from Ahmin Williams to put his team up by four

It wouldn’t seem like much, but his shot began a 13-2 game-ending run that sealed the Colonials’ district title.

Plymouth-Whitemarsh’s leading scorer both on the night with 29 points and on the season as a whole, Malone, spoke of McLeod--who he laughingly described as a “goof”--and the other Colonial underclassmen like younger brothers, having fed off of his example for how to play in high-intensity moments.

“It makes me feel good inside because I was in their shoes one time when I was at King, having big time players in front of me,” he said. “I took after them and it inspired me to do good and come up in big time moments, so I feel like they’re just taking some of the things that I do, and trying to put it into their own little arsenal. They show heart when they walk out on the court, and I’m really proud of those guys.”

“Those are like my younger brothers,” he added. “Sometimes in practice, they even try to come at me in practice, you wouldn’t think that but they really have heart.”

Whether it’s heart, a familial attitude, or just plain talent, all ten guys who took the floor for P-W fed off of the confidence it brought.

And Donofrio knows it.

“‘This isn’t about you,’” Donofrio said, as he would to every individual on his team. “Once you get a Matt Walker to come off the bench and make a three in the fourth quarter that doesn’t happen if you don’t believe you’re supposed to make that, because you have to do that for the team.”

“They went through learning curves,” he added. “Tonight, you look up and say ‘it’s time.'"