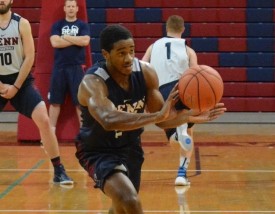 Antonio Woods averaged 10.7 points per game for Penn, but will be ineligible for the rest of the season. (Photo: Josh Verlin/CoBL)

Penn guard Antonio Woods is ineligible for the remainder of the season and cannot re-enroll at the school for a year due to “insufficient academic progress” according to a release from the team.

Woods, a 6-foot-1 sophomore, averaged 10.7 points per game for the Quakers and started in all 13 games, but his career at Penn may be over. He will not be in uniform this afternoon when the team opens up Ivy League play by hosting Princeton at 4 p.m. If Woods chooses to stay at the school, he will not be able to start classes again until the spring 2017 semester, the release said.

Woods was becoming a go-to scorer for the Quakers, and had a six-game stretch earlier in the season when he averaged 14.8 points per game. His loss is another blow to a young team still searching for the right combinations under first-year coach Steve Donahue.

The Quakers also lost Tony Hicks, their leading scorer from last season, before the 2015-16 campaign got rolling. Hicks recently announced he is transferring to Louisville.

Donahue will have his first chance to speak publicly about Woods’ ineligibility after Penn’s game against Princeton.