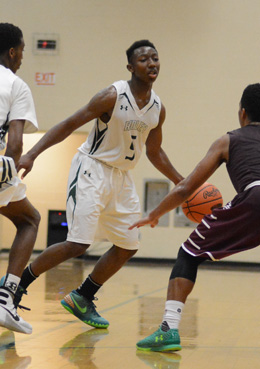 Ridley’s Brett Foster was feeling it in the first half on Friday night. He had already hit his first four 3-point attempts, so he was a little surprised when a defender gave him some space off a ball screen with the clock winding down in the second quarter.

The result? Foster’s fifth 3-pointer of the half and a 10-point lead for Ridley over Central League foe Lower Merion at halftime. His 22 points and a strong defensive effort led the Green Raiders to a 61-40 victory over the Aces. Ridley moved to 11-0 this season and is now 7-0 in the Central League.

Foster’s five triples were part of a great shooting first half for the Green Raiders. They hit a total of eight triples in the first 16 minutes, but none had quite the impact of Foster’s buzzer-beater, which made it 37-27 at the intermission.

“He sagged off on the screen, and I already had that confidence from hitting the first couple, so I had some space and I just let it go," said Foster, who recently committed to D-II East Stroudsburg. “You have to be confident in your shot. Even if I started 0-for-5, I would’ve kept shooting, I’m just thankful they went in tonight.”

Added Ridley coach Mike Snyder: “I’ve never seen him in a stretch like that. He can hit threes, but he was in a little bit of a different zone there, for sure.”

The first-half success from beyond the 3-point arc was a little concerning for Snyder, however. He worried his team would get complacent with just camping out and launching triples for the entire game.

“That’s always a tough dilemma for high school kids, because sometimes we make some threes and we fall in love with it, and we just keep shooting them and shooting them,” the coach said. “That happened (in our last game) against Marple, and we kind of saw the 3-pointer become our enemy. We just needed some drives, some pull up jumpers, some layups – just not all threes.”

Right out of halftime, the Green Raiders struggled to make anything, regardless of where they were shooting. For the third quarter's first four minutes and 38 seconds, they were held without a point as the Aces cut the lead in half to make it 37-32.

Snyder called a timeout during the stretch with the lead in jeopardy and had his team be more active on the offensive end. It worked, and Ridley scored 12 points in the final 3:22 of the quarter – seven of which came from Ryan Bollinger.

Bollinger, a senior guard, was second for Ridley in scoring with 13 points and he also added six rebounds. Julian Wing added 11 points for the Green Raiders and senior center Mike Patterson had one of the best nights of anyone on the floor with a career-high eight points and three rebounds.

Snyder was also very pleased with Patterson’s defensive effort, as he was a main reason the bigger Lower Merion team struggled to score in the paint and had just 14 points in the second half.

“We got role players, and role players have to come through when they’re needed. And he was needed tonight,” Snyder said of Patterson. “I told him you’re going to have a tough job guarding their big guy, if we didn’t defend him, we were going to be in trouble. But he did a great job, plus he had a career high eight points, which were valuable for us.”

The Aces were led in scoring by junior Terrell Jones, who had 14 points and three rebounds. Dion Harris added 10 points, but Lower Merion fell to 9-3, 5-2 in league play.

The win puts Ridley in nice position to repeat as Central League champs, but after the game, Foster wasn’t thinking that far ahead. And how could he? The Green Raiders will have one of their strongest tests of the season Saturday night at Downingtown West.

“It’s a good regular season win,” Foster said of beating Lower Merion. “But we are going to play them again, and we have a good test at D-Town West tomorrow, so we have to get ready for that.”