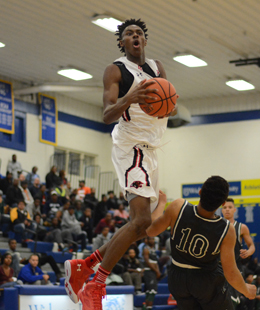 Koby Thomas (above) and Imhotep are one team to watch in this year's Pete & Jameer Nelson Classic. (Photo: Josh Verlin/CoBL)

Several state championship contenders from Pennsylvania, New Jersey and Delaware will be coming to the courts at the two area colleges for a total of 17 games that feature some top Division I prospects from the tri-state region.

Here's the some can't-miss games from the event followed by the full schedule; all teams from Pennsylvania unless otherwise indicated:

Can't-Miss Games
Archbishop Carroll vs. St. Benedict's -- Dec. 30, 5:15 PM, Widener
Former Carroll guard David Beatty goes up against the team he spent his first two years with in a game that's sure to be feature some emotional moments one way or the other. The high-major Division I target is only part of a St. Ben's squad that also features George Washington-bound big man Arnoldo Toro, who will present the toughest challenge yet for Carroll's European import, 6-8 senior Miks Antoms. The Patriots have their own talented guards in committed seniors Ryan Daly (Hartford) and Josh Sharkey (Samford), while 6-4 senior wing John Rigsby has been playing the best ball of his career.

Chester vs. Downingtown West -- Dec. 30, 7 PM, Widener
Two of the top teams in District 1 AAAA go head-to-head in what could very well be a preview of the district championship in February. The Clippers are still getting on track but have a deep and talented frontcourt led by seniors Jamar Sudan and Marquis Collins as well as wing Stanley Davis, but point guard Kahleeq Campbell is the engine that makes it all go. Downingtown West doesn't have the raw athleticism of Chester but has its own experienced senior group led by Penn commit Ryan Betley, a 6-5 shooting guard, and 6-9 big man Josh Warren, committed to Cornell.

Neumann-Goretti vs. Hudson Catholic (N.J.) -- Dec. 30, 8:45 PM, Widener
The Saints almost need no introduction at this point, after winning five of the last six PIAA Class AAA championships. Juniors Quade Green and Dhamir Cosby-Roundtree are both candidates to finish ranked in the top 50 in the country in their class, while Towson-bound senior Zane Martin gives them additional scoring punch. The Hawks are led by sophomore guard Jahvon Quinerly, who has offers from high-majors Villanova, Seton Hall and St. John's already under his belt.

Other teams/players of note
Academy New Church-- Head coach Kevin Givens has a very talented sophomore class under his watch, led by 6-8 center Marcus Littles, who just picked up a St. Joe's offer; 6-5 wing Matthue Cotton and 6-3 shooting guard Justin Anderson are on a Division I track as well.

Coatesville-- Senior Rome Boyer and the Red Raiders have yet to lose this season, picking up wins over Lower Merion and Reading en route to a 7-0 start. Head coach Chuck Moore has Coatesville playing like a District 1 AAAA favorite.

Episcopal Academy-- Junior forward Nick Alikakos is on a tear to begin the 2015-16 season, with several 30-point outings, and he's coming off an Inter-Ac MVP season. Lafayette and Hartford have offered, expect more to follow.

Friends' Central-- Virginia commit DeAndre Hunter might be the best prospect in the whole event; the 6-7 wing can score equally well inside and out, and he's got 6-1 Loyola (Md.) commit Chuck Champion alongside him.

Imhotep Charter-- The Panthers boast one of the area's top scoring guards in Daron Russell, plus high-flying junior wings Koby Thomas and Jaquan Arrington. Haven't yet lost a game to a team from the Philadelphia area, and haven't even played their best basketball yet.

Pennsbury-- The Falcons feature a pair of junior forwards in Mark Flagg and Isaiah Carpenter; Flagg, a 6-7 stretch-forward, has put himself on the radar of various Ivy and Patriot League programs.